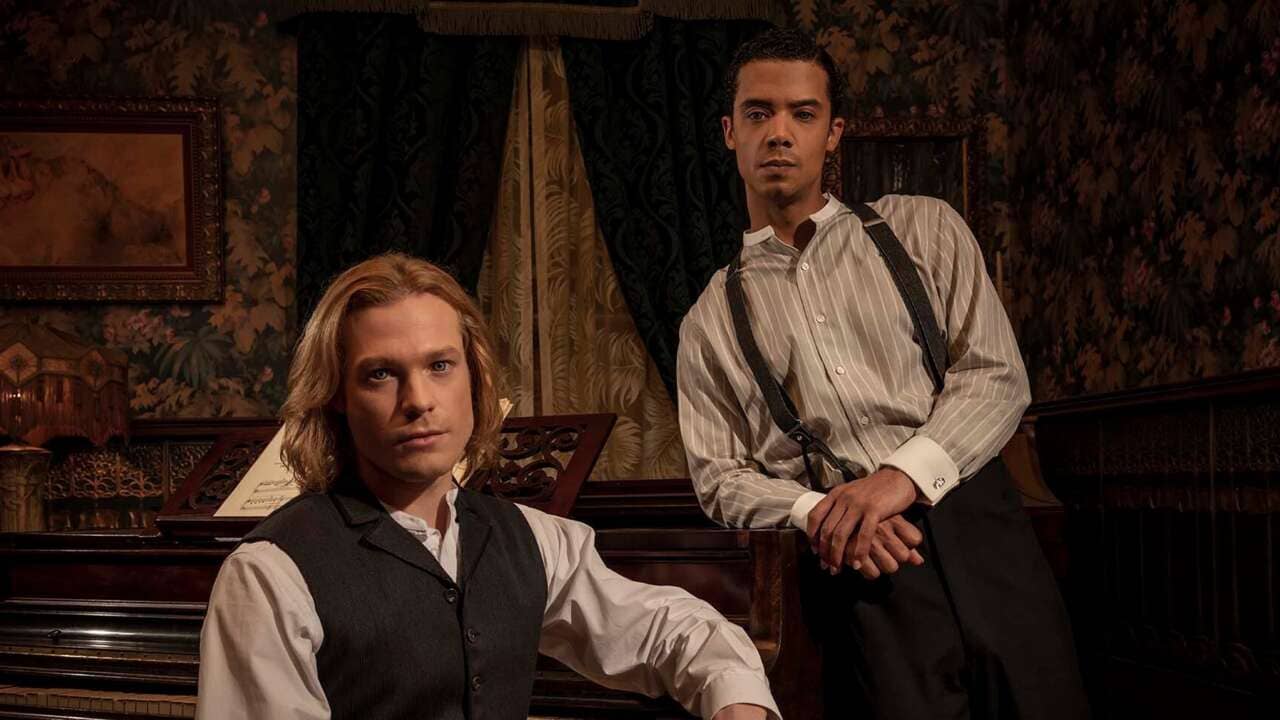 The vampire genre is full of icons dating back hundreds of years. They come in all shapes and sizes, in virtually very context, from glittering YA protagonists to wretched shambling creatures. And while we’re absolutely not here to pick favorites or measure the unquantifiable, it would be difficult to overstate just how important the work of Anne Rice is in this particular cultural phenomena. Anne Rice’s vampires aren’t the first, nor are they the last, to enter into the genre and become archetypes all their own, but the staying power of creatures of the night like Lestat, Louis, and Armand is difficult to overstate–especially for fans of horror and gothic romance.

So, there was understandably some trepidation in the air when AMC announced their plans to revisit Rice’s iconic 1976 novel, Interview with the Vampire, as a TV show. Not only did Interview, the novel, exist atop a pedestal for many genre fans, but the 1994 film adaptation (which starred an absolutely iconic Tom Cruise and Brad Pitt as Lestat and Louis, respectively) became deeply entrenched in cult status almost immediately upon its release. Why revisit something that was already done so well the first time around?

Thankfully, the show is not only aware of these questions and anxieties–it embraces them head on and immediately. Episode 1 establishes a canon–Interview with the Vampire, the novel, happened, back in the ’70s. Tortured vampire Louis de Pointe du Lac (Jacob Anderson) has already spilled his guts to disaffected journalist Daniel Molloy (Eric Bogosian) several decades ago about his experience with his maker Lestat de Lioncourt (Sam Reid) and now wants a do-over, here in present day 2022, to set the record straight on some things he wasn’t quite ready to delve into as a younger immortal. This framework also makes room for some of Interview’s bigger changes to the source material–namely that Louis, who was so famously played by Brad Pitt in the ’90s, is now a Black man.

It would have been easy for Interview’s creators to simply swap Louis’s race and leave it at that like so many other properties and adaptations have done in the past, but it confronts this new dynamic head-on as well. The context of Louis and Lestat’s relationship changes dramatically when the power dynamic includes not only immortal experience and wealth but race as well, and Interview never blinks or looks away from the ripples this creates in the narrative. This, of course, is aided by show stopping performances from both Anderson and Reid. While the novel and movie ostensibly use Louis as a point-of-view character to focus the narrative on Lestat and his antics, this new and updated take zeroes in on Louis as a fully realized character on his own, starting well before he’s given the Dark Gift by Lestat and diving into his family life, his human ambitions, and his slow downward spiral as he succumbs to Lestat’s seduction.

And seduction is very literal here. In addition to confronting the realities and complexities of the racial power dynamic at play, Interview never shies away from acknowledging what both the novels and the film often left as subtext. There is absolutely no subtext in Lestat and Louis’ romance here. They are lovers, explicitly so, and this is yet another avenue the show uses to bolster and update these familiar characters. Lestat’s flamboyant pansexuality affords him an even more privilege to move in the world compared to Louis’s fraught homosexuality, and the resulting conflicts frequently come to a head as the couple becomes more and more entwined in one another.

It’s an incredible case study in an adaptation updating both the context and the content of a source material without changing the original themes–and it works, incredibly. Virtually every new idea Interview tosses into each episode absolutely works, thanks to Anderson and Reid’s chemistry and the framing device of Bogosian’s aged and cynical Molloy, who is refusing to be swept up in the mystery and mayhem of Louis’s re-told tale. Bogosian seems to be channeling someone like the late, great Anthony Bordain in his performance–fearless to the point of self destruction, disaffected but compassionate, with worldly wisdom chopped up between scathingly funny barbs.

If there’s anything that doesn’t quite work as well in the first half of the first season, it’s the show’s updated take on Claudia, the child vampire who represents one of the biggest points of conflict in Lestat and Louis’s lives (deaths?) In the novel, Claudia is a 5-year-old and later, in the ’90s movie she’s played by a 12-year-old Kirten Dunst. Here, however, Claudia has been aged up to 14, played by 19-year-old Bailey Bass. Bass’s performance is great–she absolutely sells the turmoil and conflict of a teenager’s mounting frustration and alienation–but she’s never really styled in a way that sells the impact of her eternal youth, and characters often treat her as though she’s much, much younger than she actually looks. At one point, she telepathically overhears a group of girls sneering at her for looking like a child who stole her mother’s jewelry on the street, but Bass herself looks just as put together and mature in that moment as they do. The conflict and the impact just never really rises to the top and it seems like some minor adjustments to make things feel less like they were still aimed at an adolescent Claudia and more at a teenage Claudia could have gone a long way.

As far as missteps go, however, this one is minor–while Claudia’s story may trip over itself while she’s alone, it absolutely still works when she’s bouncing off of both Lestat and Louis. With their relationship being made explicitly romantic, Interview is provided ample space to explore the trio without subtext or allusion–they’re a dysfunctional family, spiraling out of control, rather than three immortals who happen to be on-again-off-again friends and rivals with unspecified or unspoken tension.

Visually, Interview with the Vampire isn’t completely divorced from the ’90s romantic horror cloth it’s spun from. The set pieces–1900s New Orleans–are beautiful but the visual effects can skew a bit corny at times, especially in fight scenes or whenever anyone makes use of their vampiric magic. It’s done with a sort of self-awareness, however, that isn’t quite tongue-in-cheek but certainly doesn’t try too hard for realism. The fights, the blood-sucking, the hypnosis, the uncanny vampire eyes–they’ve all got a thin veneer of camp over them, which ultimately works to balance the tone. Interview certainly isn’t a horror comedy–this is not a run for What We Do In The Shadows place in the horror pantheon by any means–but it lacks the dourness or self-seriousness of something like The Walking Dead. There is extravagance here, and the big flourishes lean into the fact that the sophistication of the VFXs might not be blockbuster level.

All told, the show is a rousing success on virtually every level, with an astronomical amount of potential baked into its stellar cast. Its fearless adaptation and renewal of the source material provides enough gas in the tank to carry its characters through conflicts both new and familiar–all we have to do now is hope that Season 1 sticks the landing and keeps the energy up into the future.

AMC’s Interview with the Vampire premieres on Sunday, October 2.