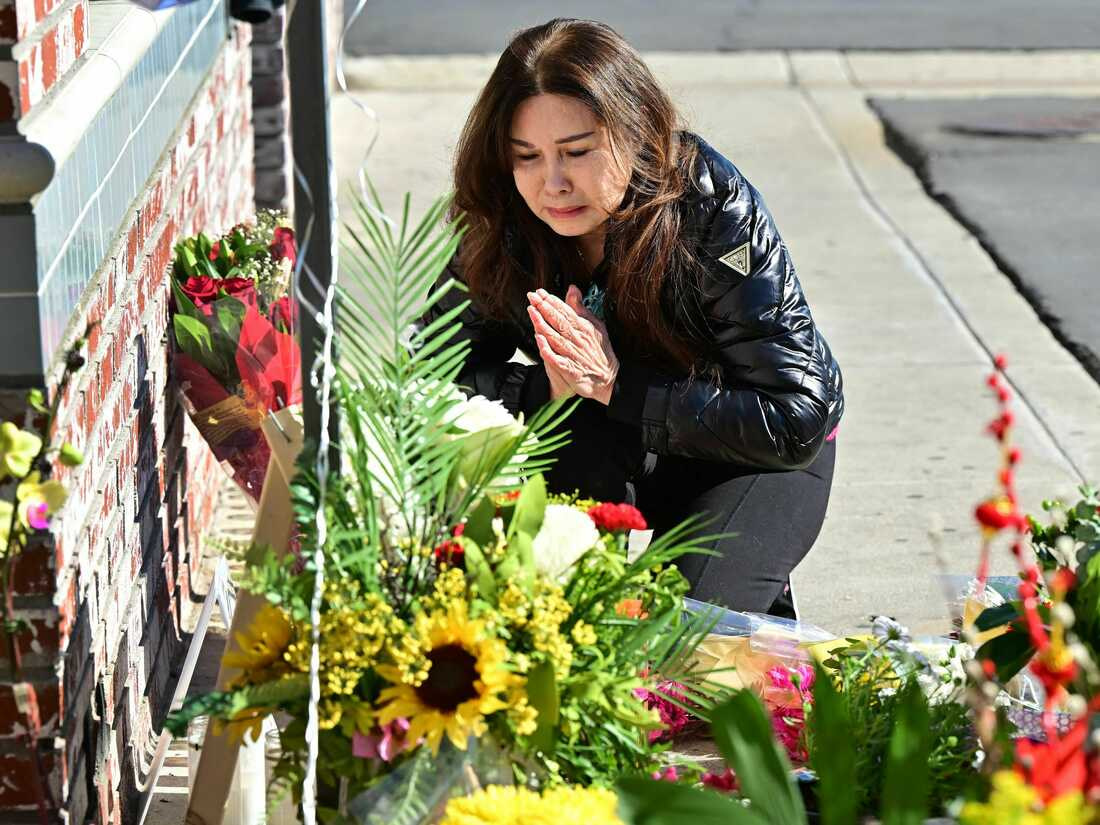 A woman who lost many friends in the Jan. 21 shooting in Monterey Park, Calif., grieves at a makeshift memorial outside the Star Ballroom Dance Studio.

Residents of two separate communities in California are reeling after two mass shootings in three days have claimed the lives of 18 people and injured 10 more.

Five men and two women were killed and another man was injured in Monday’s shootings in Half Moon Bay. The attack left residents in the Northern California town grieving just days after a gunman opened fire at a dance studio in Monterey Park on Saturday. That attack left 11 dead and nine injured in the Southern California city.

The two mass shootings just hundreds of miles apart share devastating similarities. Both alleged shooters were men of Asian descent over age 60. In the Half Moon Bay shootings, police said the victims were both Asian and Hispanic farmworkers. Nearly all the victims of the Monterey Park attack appear to be of Asian descent.

There have been more than 30 mass shootings in the U.S. so far this year. Just as officials in Half Moon Bay were gathering for a news conference Tuesday afternoon, reports of a shooting in Yakima, Wash., started to make headlines.

“Only in America do we see this kind of carnage,” California Gov. Gavin Newsom said during that news conference. He said earlier that he was with victims of the Monterey Park attack when he was pulled away to be briefed on the second incident in Half Moon Bay.

California Gov. Gavin Newsom met with victims’ families, local leaders and community members who were impacted by the shootings in Half Moon Bay.

Newsom called for action on gun violence and criticized politicians, mainly Republicans, for not doing more

In a meeting with Democratic congressional leaders in Washington, D.C., President Biden said, “Our hearts are with the people of California.”

“I just got back from spending time with Gavin Newsom on the floods and the devastation that occurred. And then, on top of that, you see what’s happened in California and what’s happened to the Asian American community. It’s been devastating,” Biden said.

He called on lawmakers to bring Sen. Dianne Feinstein’s assault weapons ban to his desk to sign.

Vice President Harris is heading to Monterey Park on Wednesday to meet the community.

FBI officials walk toward the scene of the shooting at Mountain Mushroom Farm, on the outskirts of Half Moon Bay, on Jan. 24.

The Half Moon Bay shooter heads to court Wednesday

Half Moon Bay is a close-knit community known for its ranching, farming and fishing, officials said in a news briefing Tuesday. That sense of security and closeness was shattered with Monday’s tragedy.

Authorities described the deadly shootings in Half Moon Bay as potentially a “work place incident.”

Eight people were shot at two different mushroom farms: Mountain Mushroom Farm, where the alleged shooter was an employee, and Concord Farms, according to KQED.

Chunli Zhao, the suspected gunman in the Half Moon Bay shootings.

The 67-year-old reportedly parked his car at the police station. A deputy recognized his car from a description issued earlier, and he was arrested at gunpoint in the parking lot. Police said they found a legally purchased semi-automatic handgun in Zhao’s vehicle.

The motive for the shootings is still unknown, as authorities offered no new information on Tuesday. Not much is known about Zhao.

The San Francisco Chronicle reported that Zhao had previously been accused of threatening and trying to suffocate a co-worker from a prior job. That report said the co-worker filed for a temporary restraining order against him in 2013.

Zhao is expected to be arraigned Wednesday at 1:30 p.m. PT. He is facing seven counts of murder and one count of attempted murder, plus enhancements for using a firearm, KQED reports.

The latest on the Monterey Park shooting

Members of the media are stationed in the parking lot outside Star Ballroom Dance Studio on Jan. 23.

On Tuesday, police continued investigating the Monterey Park shooting and the man who police say is responsible for the tragedy at the Star Ballroom Dance Studio there.

Investigators served a search warrant at the home of the deceased suspected gunman, Huu Can Tran. The 72-year-old kept hundreds of rounds of ammunition, a rifle and material to make homemade suppressors at his Hemet home, police said.

Investigators uncovered a handgun inside the van in which the suspect shot himself following an hours’ long search, Los Angeles County Sheriff Robert Luna said.

Investigators are still looking into where the suspect may have gotten his guns from. They indicated he was arrested for illegal possession of a firearm in the 1990s.

The names of the Monterey Park deceased are released

A makeshift memorial of flowers, candles and balloons grows outside City Hall in Monterey Park on Jan. 24.

As police searched for more information on the suspected gunman, investigators released the full names of the six men and five women who were killed.

Details about each of these individuals are starting to emerge as family members and friends share heartbreaking announcements of their losses.

In a statement on Twitter, Mymy Nhan’s family wrote: “We are starting the Lunar New Year broken. We never imagined her life would end so suddenly.”

“She spent so many years going to the dance studio in Monterey Park on weekends. It’s what she loved to do. But unfairly, Saturday was her last dance.”

Tiffany Liou, whose husband appears to be related to Nhan, said she “was the first person shot and killed” during the mass shooting at the Star Ballroom Dance Studio.

On a fundraising page on GoFundMe, the family described her as “kind beyond words. She was a caretaker to all people around her. She was a loving aunt, sister, daughter and friend. She was our biggest cheerleader.”

Diana Man Ling Tom’s family issued a statement after her death on Sunday at LAC + USC Medical Center, where she was treated after being shot.

“On behalf of Diana Tom, we, her family, condemn this senseless act of violence that has uprooted the lives of all the victims, their families and the entire API community at large. We honor and support all of those affected,” Tom’s family wrote in a statement on GoFundMe.

“Diana was a hard-working mother, wife and grandmother who loved to dance. On the night of January 21, Diana was at Star Dance celebrating the Lunar New Year by dancing with her friends. To those who knew her, she was someone who always went out of her way to give to others.”

Xiujuan Yu’s niece, Kathleen Fong, shared her heartache on GoFundMe, writing: “What was meant to be a night out celebrating the Lunar New Year with friends ended up being a devastating and life-changing event for my family.”

“After days of uncertainty, anxiety, and waiting in worry, we received the news that my aunt was indeed among the deceased at the incident. This sudden tragedy has struck my family, and despite our best attempts to mourn for her, we graciously ask the community for help in raising funds for her funeral at this time.”

Fong said Yu and her family immigrated to the U.S. from China in the early 2010s. Yu is survived by her husband and three children.

Ming Wei Ma, 72, was the father of Ray Ma and Mary Ma, Courtney Thong wrote on a GoFundMe page.

“He was one of the … people killed in the January 21, 2023 shooting in Monterey Park. He was the owner of Star Dance Studio and built a community that dearly loved and respected him for his kindness and liveliness,” Thong wrote.

The family of 68-year-old Valentino Marcos Alvero wrote in a statement, “Overnight, we became unwilling members of a community who has to mourn the loss of our loved ones due to gun violence. We are left frustrated, stuck with this vicious cycle.”

“Most importantly, please remember that Valentino is more than just a headline or a news story,” the family added. “He was a loving father, a dedicated son and brother, a grandfather who loved his three granddaughters fiercely, an uncle who loved his nieces and nephews like his own.”

Alvero’s family described him as a man with a “gusto” for life and others, who loved ballroom dancing as well as his community and who was “the life of any party.”