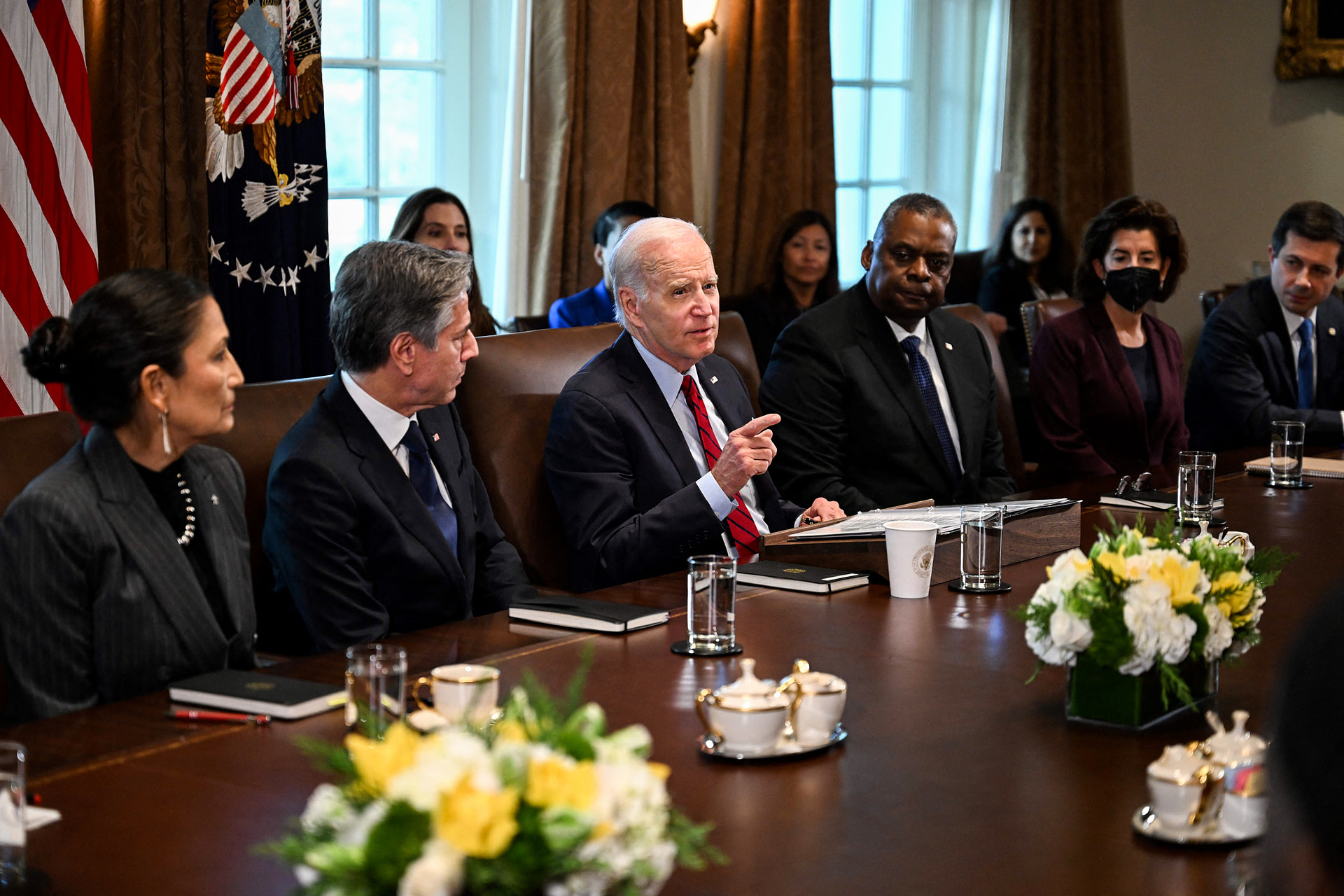 Biden’s Cabinet is sticking around, bucking the turnover trend of his predecessors

WASHINGTON — Ron Klain’s imminent departure as the White House chief of staff is the first step in a broader reshuffling among President Joe Biden’s advisers as he prepares for a 2024 re-election bid.

Jeff Zients, who led the Biden administration’s Covid-19 response, is set to replace Klain, and other White House aides are expected to leave in the coming months and shift over to the campaign, sources said.

But one part of Biden’s administration has been unusually stable, and it looks to stay that way for the foreseeable future: the Cabinet secretaries who run the sprawling federal government. Not one of the 15 department heads in the presidential line of succession quit in the first half of Biden’s term, nor have any given notice that they plan to leave any time soon, White House officials said.

The absence of turnover among the Biden appointees — whose jobs include stopping crime, keeping food safe and guarding against attack — is a rarity. Since Ronald Reagan’s presidency in the 1980s, only Barack Obama had no one from the Cabinet step down by the midpoint of his first term, said Kathryn Dunn Tenpas, a senior fellow at the Miller Center, a think tank on the presidency at the University of Virginia.

“Not one single member of the Cabinet has left in disgrace, is writing a tell-all book or has bad-mouthed the president,” said Sen. Chris Coons, D-Del., who is close to the Biden White House. “There are no leaks, no backbiting, nothing.”

The new Republican-controlled House may try to yank at least one from his job. Some GOP House members hope to impeach Homeland Security Secretary Alejandro Mayorkas in reprisal for what they see as lax immigration enforcement at the U.S.-Mexico border. A White House official said Mayorkas would fight any such attempt and has no wish to step down.

The durability of Biden’s Cabinet is something of a surprise. Before the midterm elections in November, some administration officials believed Cabinet departures hinged on whether Democrats kept control of the Senate. The thinking was that Cabinet officials would feel freer to leave because Biden would have an easier time getting a successor confirmed by the Senate than if Republican leader Mitch McConnell ran the chamber.

Democrats, indeed, kept the Senate, but the exodus from the Cabinet didn’t happen. In an interview after the midterms, Treasury Secretary Janet Yellen said she wasn’t planning to leave before the term was over, despite the more favorable climate for confirmation.

“We have a lot of work to do,” she said in November. (There had been continual speculation that Yellen would leave and be replaced by Commerce Secretary Gina Raimondo, who in turn would be succeeded by Terry McAuliffe, the former governor of Virginia. When the Yellen domino didn’t fall, the others stayed in place.)

Why Cabinet members stay put rather than take better-paying jobs in the private sector or embark on independent political careers may have something to do with how they’re treated. Biden has made it a point to show them they’re valued, aides argue.

Before he gives a speech to a union group, he’ll call Labor Secretary Marty Walsh to make sure he is comfortable with the text, said Anita Dunn, a senior White House adviser. When a businessperson raises a concern with him, he’ll pick up the phone and call Raimondo.

“This is a president who really uses his Cabinet and values his Cabinet,” Dunn said. “Often, Cabinet members feel as though they are disconnected from the White House. In this case, the president has really depended on his Cabinet for advice.

“They are a group of people that he has deep relationships with and who he listens to and seeks wisdom from that’s broader than their Cabinet agencies,” she added.

Going back decades, presidents have steadily concentrated power in the White House, at the Cabinet’s expense, historians say. Some Cabinet secretaries have felt marginalized as presidents stocked the West Wing with trusted advisers and usurped the prerogatives of Cabinet members who had thought they were brought in to run things.

The most glaring examples are in the foreign policy realm. Presidents have steadily padded the White House’s National Security Council with staff members who have, in some cases, left the secretary of state isolated. President Richard Nixon entrusted his national security adviser, Henry Kissinger, with his most sensitive and consequential foreign policy goals, diminishing Secretary of State William Rogers.

Trump had no rapport with his first secretary of state, Rex Tillerson, who once privately referred to him as a “moron” and was eventually fired by tweet.

But Biden is more of an institutionalist, having helped vet and confirm Cabinet secretaries throughout his 36 years as a senator. He also has an affinity with some members of his Cabinet forged through a long career in politics.

“Biden’s inner circle is so close-knit it’s almost familial,” said Chris Whipple, who recently published a book about Biden’s presidency. “It’s not so much a team of rivals but a bunch of team players. Those are just the people he chose. They’ve been pretty cohesive, and I don’t see a whole lot of movement.”

Biden and Secretary of State Antony Blinken have worked together for two decades, starting in the early 2000s, when Biden chaired the Senate Foreign Relations Committee and Blinken was the Democratic staff director.

Asked about Blinken’s primacy in foreign policy matters, Dunn said Biden’s “relationship with Tony is so deep and goes back so far that it’s just a given.” She laughed.

Another enticement for the Cabinet to stay is that the next two years may be more fun. After grinding negotiations, Biden spent the first two years passing trillion-dollar infrastructure and climate change bills that it’s the Cabinet’s job to implement. That means ribbon cuttings and visits to grateful states — all of which are helpful in cementing legacies in office.

“It’s just like any job,” said Tenpas of the Miller Center. “When there’s success, you want to keep doing it.”

CNN  —  Paris Saint-Germain has struggled in recent games, relatively speaking, but...
39 mins ago