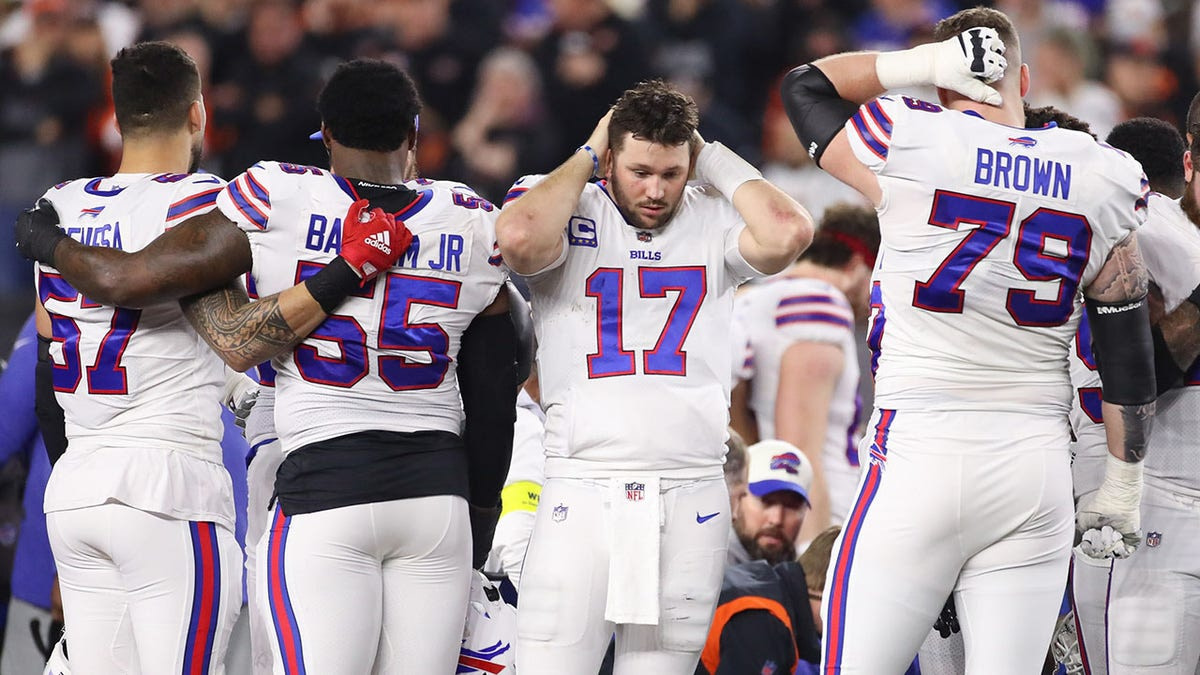 The NFL world received positive news Thursday when doctors revealed safety Damar Hamlin had made “substantial improvement” after suffering a cardiac arrest during Monday night’s game against the Cincinnati Bengals.

Officials from the hospital provided an update on Hamlin Thursday afternoon, saying the second-year pro has been communicating through writing because he is not yet able to speak.

Buffalo Bills safety Damar Hamlin warms up prior to a game against the Cincinnati Bengals Jan. 2, 2023, at Paycor Stadium in Cincinnati.
(Ian Johnson/Icon Sportswire via Getty Images)

Dr. Timothy Pritts of the University of Cincinnati Medical Center said Hamlin was “beginning to awaken” Thursday morning with his neurological condition and function appearing intact.

“I want to thank — I know coach mentioned it earlier — our training staff for going out there, not knowing what’s going on but going through a checklist … saving his life,” an emotional Allen told reporters.

“Being on that field, you lose sleep. You hurt for your brother. A lot of shared grief.”

“From a player’s view, hearing Mario talk to us, the words of encouragement he had for us,” Allen said of the call with Hamlin’s father. “And I had a chance actually to talk to him Monday night, and the only thing he said was ‘My son’s gonna be all right.'”

Doctors reported that Hamlin asked Thursday — in writing — about the result of Monday night’s game against the Bengals, something Allen said Hamlin’s father predicted during Wednesday’s call.

“His dad said that the first thing that he’s going to ask when he wakes up is ‘Who won the game?’” Allen said. “And, sure enough, that’s what he did. And, as teammates, you love hearing that response. That the first thing on his mind wasn’t ‘Poor me.’ It was ‘How are my teammates doing? Did we win this game?’

“And that’s powerful in itself, man. I don’t think people really understand the bond and the relationship and the brotherhood that you have as an NFL team. Especially this one here. Guys love each other. We really do. And for Damar to go through that and to come out the other side and to be thinking about his teammates … That’s Damar. That’s who he is though.”

Buffalo Bills A.J. Epenesa (57), Boogie Basham (55), Josh Allen (17) and Spencer Brown (79) react while safety Damar Hamlin (3) is attended to on the field during a game against the Cincinnati Bengals Jan. 2, 2023, at Paycor Stadium in Cincinnati.
(Ian Johnson/Icon Sportswire via Getty Images)

Allen told reporters that while the team is not sure when they’ll be able to speak to Damar, they’re “chomping at the bit” to see him.

“Tell him how much we love him as a team,” Allen said when asked what he’ll say to Hamlin when he first is able to speak with Hamlin. “He’s a kid that walks around the facility that you never see in a bad mood. He’s always upbeat. He just wants to be out there and play football. We’re looking forward to that.”

The Bills are scheduled to play the New England Patriots Sunday.

PrevPreviousWhy South Asians are the most politically liberal of all Asian Americans
NextTransfer Talk: Chelsea confident in beating Arsenal to sign Shakhtar’s MudrykNext
Back to Feed

Are you excited for any of the dozens of high-profile video game...
34 mins ago

8:10 AM ETESPN News Services Colorado State issued a public apology to...
57 mins ago