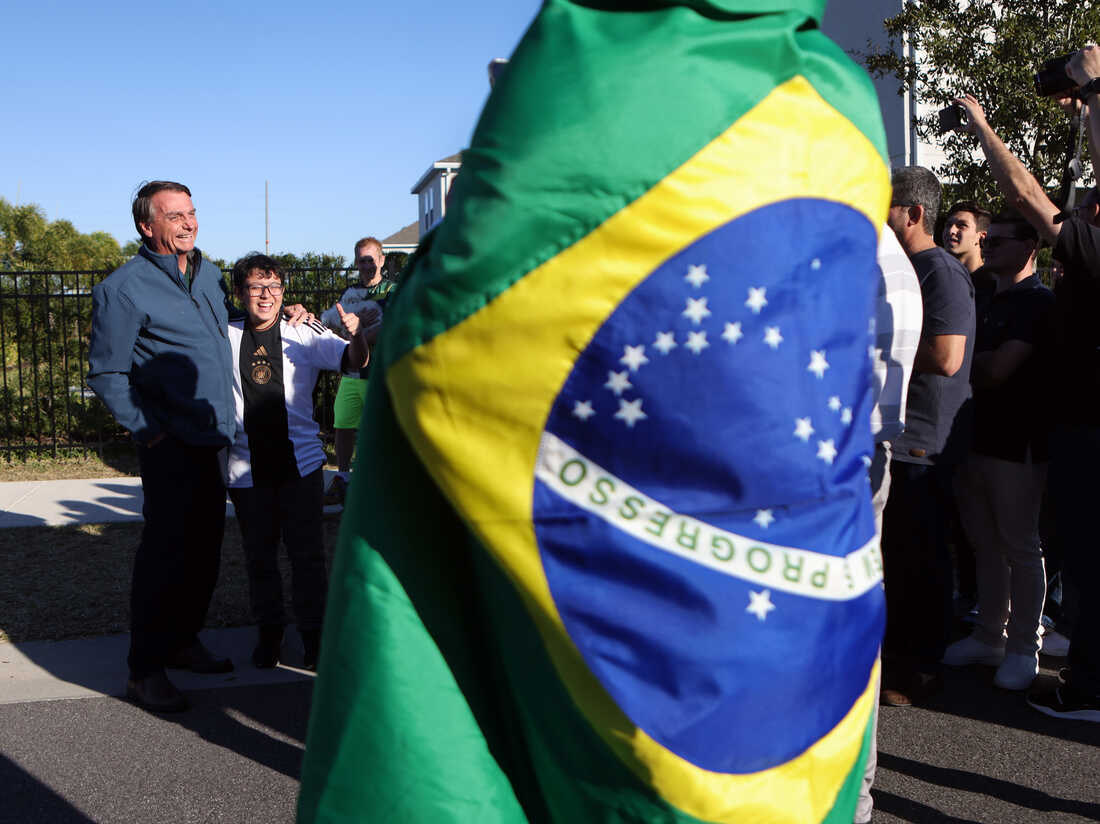 Former president of Brazil Jair Bolsonaro greets supporters on Jan. 17, 2023, outside of a home where he has been staying t in Kissimmee, Fla.

KISSIMMEE, Fla. — Rows of cars, some of them rentals, line the shoulder of a highway, outside the security office of a gated community in this Orlando suburb.

Lutty Sutton is among the dozens of people who have shown up at the gated community on a Tuesday afternoon in the hopes of seeing Jair Bolsonaro, the far-right former president of Brazil, who is staying in a vacation home there owned by Brazilian mixed martial artist José Aldo.

Bolsonaro came to Florida on Dec. 30, two days before he was supposed to hand over the presidential sash signifying the peaceful transition of power to the rival who had recently defeated him, Luiz Inácio Lula da Silva.

“He really just doesn’t like Lula and did not want to hand the presidential sash over to him at the inauguration.” says Bryan Pitt, assistant director at UCLA’s Latin American Institute.

Pitt says Bolsonaro may have taken inspiration from President Donald Trump, who also set a precedent by skipping Joe Biden’s inauguration in 2021.

“I cannot sleep, because the situation in Brazil is very dangerous,” says Sutton, who is visiting the U.S. from Rio de Janeiro.

Bolsonaro’s stay in a suburb of Orlando near Disney World has drawn criticism from U.S. lawmakers who have called for President Biden to revoke a diplomatic visa Bolsonaro used to enter the country, especially since he is no longer president of Brazil.

“We must not allow Mr. Bolsonaro or any other former Brazilian officials to take refuge in the United States to escape justice for any crimes they may have committed when in office,” the letter states.

Brazil’s supreme court approved an investigation into Bolsonaro in mid-January, expanding a wider probe into finding those responsible for the Jan. 8. riots. More than 1,000 people have been detained so far.

The nation’s electoral court is also processing 16 separate lawsuits related to Bolsonaro and his campaign.

“It may be that he’s hoping to stay in Florida until the heat comes off a little bit,” says Pitts.

Bolsonaro critics are noting the similarities between the Brazilian riot and the Jan. 6, 2021, attack on the U.S. Capitol by supporters of then-President Trump, who had recently lost his re-election bid.

“Nearly two years to the day the U.S. Capitol was attacked by fascists, we see fascist movements abroad attempt to do the same in Brazil. … The U.S. must cease granting refuge to Bolsonaro in Florida,” wrote Alexandra Occasio Cortez (D- New York) in a social media post in response to video of the Brazilian riots.

Former President of Brazil Jair Bolsonaro leaves supporters after greeting them and posing for photos with them Jan. 17 outside a home he has been staying at in Kissimmee, Fla.

Bolsonaro supporters are espousing similar conspiracy theories fueled by Trump backers, saying the U.S. stolen election served as a blueprint for the Brazilian one.

“It’s really similar. They copied it.” says Eileen Lopes, another supporter who came in the hopes of meeting Bolsonaro. “Everybody knows, the votes are stolen.”

Lopes believes Bolsonaro won the election although an investigation by the Brazilian military found no voter fraud.

Trump allies, including former adviser Steve Bannon, espoused the conspiracy theories before the Brazilian riots. Lopes believes, without evidence, that Bolsonaro fell victim to an elaborate scheme by the deep state in Brazil, the media and his political opponents to rig voting machines to steal the election.

“They are liars. We don’t have a ballot. We don’t have paper proof,” Lopes says about the Brazilian election, reiterating a similar conspiracy theory held by election deniers in the United States over electronic voting machines.

Courts in several states have rejected suits alleging that the U.S. election was stolen. Furthermore, no valid evidence has been found to support election fraud.

Much of their distrust is based on disinformation and outright lies on social media.

Former President of Brazil Jair Bolsonaro greets and takes photos with supporters outside a home he has been staying at in Kissimmee, Florida, U.S., January 17, 2023.

“I follow him on social media, on the Internet, ” says Sutton, who, like many Bolsonaro supporters, shares a distrust of news organizations. “The media don’t say anything. People that don’t follow social media, they don’t know the real situation. They don’t know.

“No one shows the truth, they only tell lies,” says Sutton, who makes an exception for far right media figures Tucker Carlson on Fox News and author Glenn Greenwald.

“Both of them really know the situation in Brazil,” she says.

Florida has proven to be a stronghold of support for Bolsonaro.

“Out of all the Brazilian electoral districts, both within Brazil and outside of Brazil, the highest percentage of votes that Bolsonaro got was in Miami,” says Pitt.

PrevPreviousGoldenEye finally comes to Xbox and Switch (you’ll probably want it on Switch)
NextTeacher shot by 6-year-old texted dire warning to a loved one before she was wounded, source saysNext
Back to Feed

Transportation Secretary Pete Buttigieg speaks during the annual winter meeting of the...
45 mins ago

Please enter your date of birth to view this video By clicking...
49 mins ago

WWE 2K23 is the follow-up to last year's successful relaunch of the...
49 mins ago

CD Projekt Red has rolled out a new patch for The Witcher...
54 mins ago