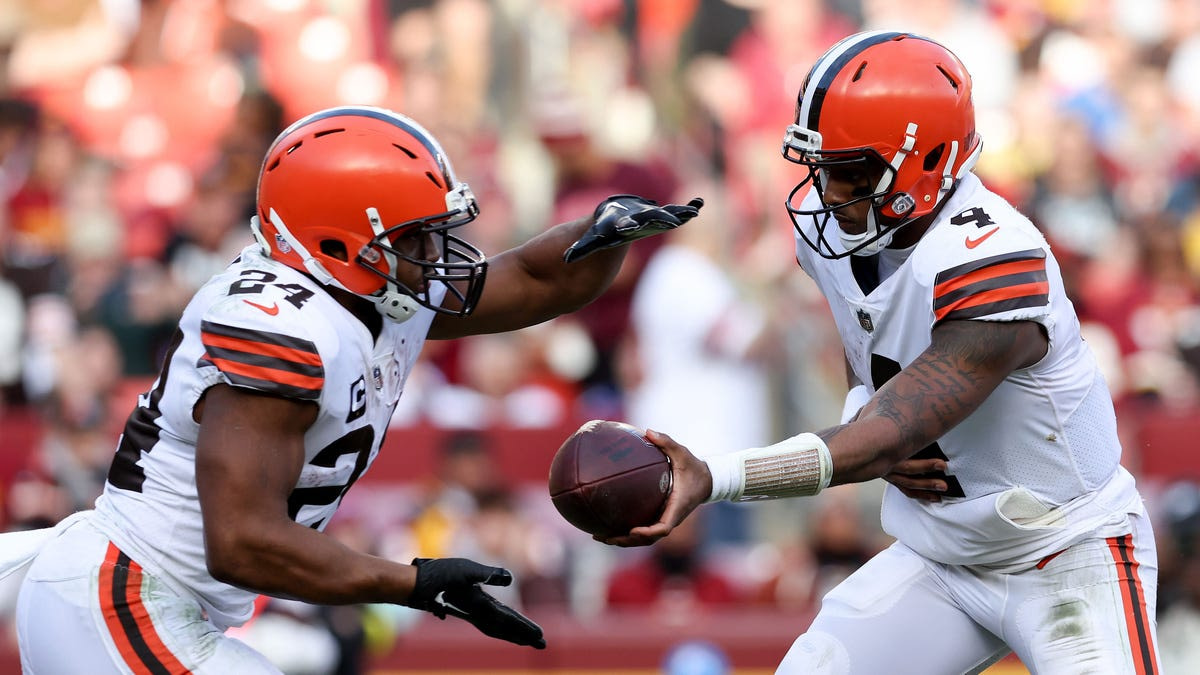 Fans booed Carson Wentz and chanted for Taylor Heinicke to no avail while it was becoming abundantly clear Ron Rivera’s quarterback change backfired on the Washington Commanders.

It snowballed so badly, it turned into another loss for a team once in control of its playoff chances.

Wentz threw three interceptions after getting the starting job back, defensive miscues added up and the Commanders’ postseason odds took a major hit with an embarrassing 24-10 defeat Sunday to the Cleveland Browns, who had nothing to play for.

Deshaun Watson #4 of the Cleveland Browns runs the ball during the fourth quarter against the Washington Commanders at FedExField on January 01, 2023 in Landover, Maryland.
(Todd Olszewski/Getty Images)

Washington (7-8-1) is winless in five games and would be eliminated if Green Bay beats Minnesota.

“I have high expectations for myself and this team, and we underperformed — I did, myself, as well,” said Wentz, who was 16 of 28 for 143 yards. “That’s not what I had in mind and what we had in mind as a team. Not the performance I envisioned. A lot of stuff I want back. Yeah, that was a tough one.”

The offense gained just 261 yards — 96 on Washington’s only touchdown drive — not exactly the spark Rivera was hoping for when he went back to Wentz. Fans making up the sparse crowd booed and chanted early on for Heinicke multiple times after Wentz missed open receivers or lobbed the ball into the hands of a Cleveland defender.

“I tried to be aggressive, tried to force a couple throws early, obviously, and kind of put us in a hole,” said Wentz, who similarly melted down with Indianapolis at this point last season when the Colts needed to win to get into the playoffs. “Then the rest of the way just didn’t make enough plays personally, as a team — the whole nine yards. I’m definitely kicking myself over some.”

Fans chanting, “Heinicke! Heinicke!” did not get their wish: Wentz remained in the game and struggled to move the ball beyond handing it to rookie running back Brian Robinson Jr., who rushed for 87 yards on 24 carries. Rivera said he contemplating going to Heinicke but decided against it once his team fell behind by 14 and he knew some downfield throws would be necessary.

Carson Wentz #11 of the Washington Commanders throws a pass against the Cleveland Browns during the first half of the game at FedExField on January 01, 2023 in Landover, Maryland.
(Todd Olszewski/Getty Images)

“Yeah, I thought we might (see Heinicke) just because he was available and the other quarterback was struggling a little bit, but they stuck with him,” said Browns safety Grant Delpit, who had two of the interceptions. “We had a good game plan for him, and it worked out.”

The Commanders’ fourth-ranked defense allowed a handful of big plays, including a 46-yard pass from Deshaun Watson to Amari Cooper that became a touchdown when top cornerback Kendall Fuller missed an open-field tackle.

Watson also connected with Cooper on a 33-yard TD pass in the fourth quarter that sent fans to the exits.

The Browns (7-9) were already out of the race in the AFC but made good on tight end David Njoku’s expectation they’d “give the Commanders hell.” Cooper had three catches for 105 yards, Nick Chubb ran 14 times for 104 yards and Watson finished 9 of 18 for 169 yards and the TD passes to Cooper and Donovan Peoples-Jones.

“That was definitely the potential of what the future can hold,” Watson said.