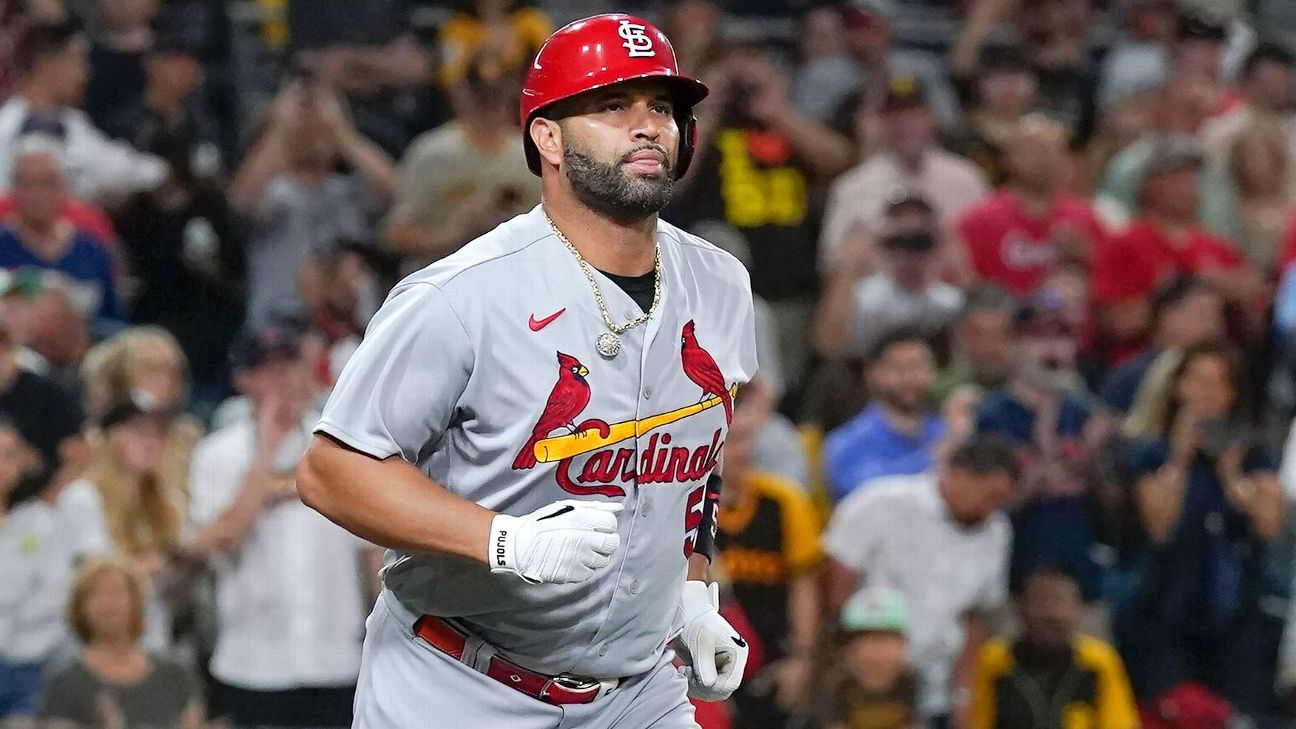 Pujols launched home run No. 699 in the third inning, a 434-foot, two-run shot to left-center field off left-hander Andrew Heaney that gave the St. Louis Cardinals a 2-0 lead. His 700th home run, another two-run blast, came an inning later.

The Cardinals are playing their 152nd game of the season. The team plays two more in Los Angeles, then a two-game series in Milwaukee before returning to St. Louis for its final homestand of the regular season, a three-game set.

Pujols’ two homers give him 2,207 RBIs for his career, seven away from tying Ruth for the second most all time.

Pujols’ final season has seen him play some of his best baseball down the stretch. He entered Friday’s game batting .313/.378/.657 with 13 home runs and 33 RBIs in 47 second-half games, during which he passed Alex Rodriguez (696) for sole possession of fourth place on the all-time home runs list. His surge has coincided with the Cardinals practically running away from the rest of the National League Central.

Pujols now has 18 20-homer seasons, third most in major league history behind only Aaron (20) and Bonds (19). He joins Bonds as the only players ever with 20 homers at age 42 or older, according to ESPN Stats & Information research.

PrevPreviousInside processing center handling influx of migrants
NextAlbert Pujols joins 700 HR club: The best stories from those who played with and against himNext
Reddit
Facebook
Twitter
LinkedIn
WhatsApp
Email
Back to Feed

7:40 AM ETAmanda LoudinCatherine Parenteau was pretty much born with a tennis...
6 mins ago

Piracy hasn't been as big a problem on Sony's recent PlayStation consoles,...
17 mins ago

“Driftmark,” this week’s episode of House of the Dragon, featured perhaps the...
21 mins ago

With a growing number of patients in states that now prohibit abortion...
24 mins ago

Another major piece of mobile M&A appears to be in the works...
28 mins ago

Hello and welcome back to Equity, a podcast about the business of startups,...
32 mins ago

Things compared include unused Breath of the Wild concept art, such as...
36 mins ago

Please enter your date of birth to view this video By clicking...
36 mins ago

As part of October's Steam Next Fest, Deep End Games has debuted...
36 mins ago
Load More