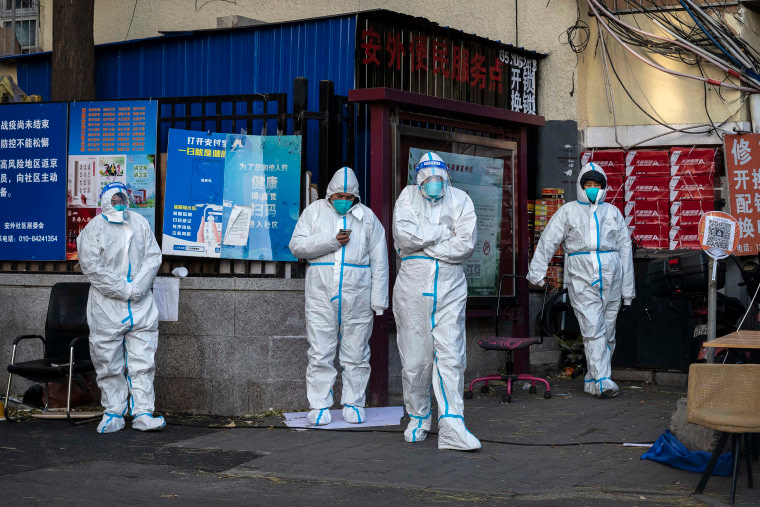 HONG KONG — Chinese authorities are moving to ease strict “zero-Covid” controls, in an apparent response to a nationwide wave of protests that have otherwise been suppressed.

Sun Chunlan, the vice premier in charge of the pandemic response, said China was facing “a new situation and new tasks in epidemic prevention and control” as the coronavirus becomes weaker, according to a report by Xinhua, China’s state-run news agency.

At a meeting with experts from the National Health Commission on Wednesday, Sun stressed the importance of improving treatment measures, preparing medications and other medical resources and increasing vaccinations, especially among the older population.

Notably, Sun did not mention President Xi Jinping’s “dynamic zero-Covid” policy that has guided China’s pandemic response and made it an outlier among the world’s major economies, all of which have lifted most Covid restrictions.

Though Chinese officials announced an easing of Covid measures last month, they say tough controls have been kept in place to save lives in an undervaccinated population that has barely been exposed to the virus. In recent weeks, outbreaks driven by the highly transmissible omicron variant have resulted in millions of people being confined to their homes.

Lockdowns are now being lifted in more and more places including Beijing, the capital, which reported a record 5,043 new infections on Thursday, up from 1,648 a week ago. Local officials said Wednesday that people with no need to leave home, such as older people and remote workers, would be exempt from mass testing.

Beijing resident Claire Han said the overall rules were still strict, with dine-in service banned at restaurants and a PCR test from the past 48 hours required for entry into most venues.

“The current policy is confusing and unclear. I’m not sure if it will get better or worse,” Han, 41, told NBC News on Thursday. “My friends and I have stockpiled a lot of food at home in case the policy gets stricter again.”

Easings have also been announced in major cities including Guangzhou, Zhengzhou and Chongqing. Covid unrest in Guangzhou began in mid-November and continued as late as Tuesday night, while Zhengzhou was the site of protests last week by workers at the world’s largest iPhone factory.

Government announcements this week about the easing of restrictions have not mentioned protests that broke out across China in recent days, with crowds demanding an end to Covid rules that they said contributed to a deadly fire in the western Xinjiang region. Some protesters went further, calling for democratic reforms and even for Xi to step down, in a show of defiance that had not been seen since he came to power in 2012.

Chinese authorities have mostly stamped out the protests, with heavy police presence at protesters’ former gathering sites. But experts have suggested protesters could find a new focal point in former Chinese President Jiang Zemin, whose death at 96 on Wednesday has set off a wave of nostalgia among people who associate him with relatively greater freedom compared with Xi.

Jiang came to power just after the Tiananmen Square crackdown in 1989 and led China during a decade of breakneck economic growth. A state funeral will be held for him next Tuesday at the Great Hall of the People in Beijing, state media reported Thursday, with Xi chairing the funeral committee.

Like other Chinese leaders, Jiang showed little tolerance for dissent, jailing activists and banning the Falun Gong religious movement. But the political environment has greatly tightened under Xi, leading some people in China to reassess Jiang’s legacy.

“Now they have pushed people to the edges, to the point I think ‘Toad’ isn’t that bad,” Umi Yang, who is in her 20s and from Beijing, told NBC News on Wednesday, using a nickname for Jiang that derives from his trademark glasses.

“I was born in the 1990s,” one user wrote on the social media platform Weibo. “I can’t remember exactly what I did in childhood, but I can remember the color was bright, and it was free and relaxed. RIP Grandpa Jiang.”

A Russian national was indicted for helping an oligarch evade US sanctions...
50 mins ago