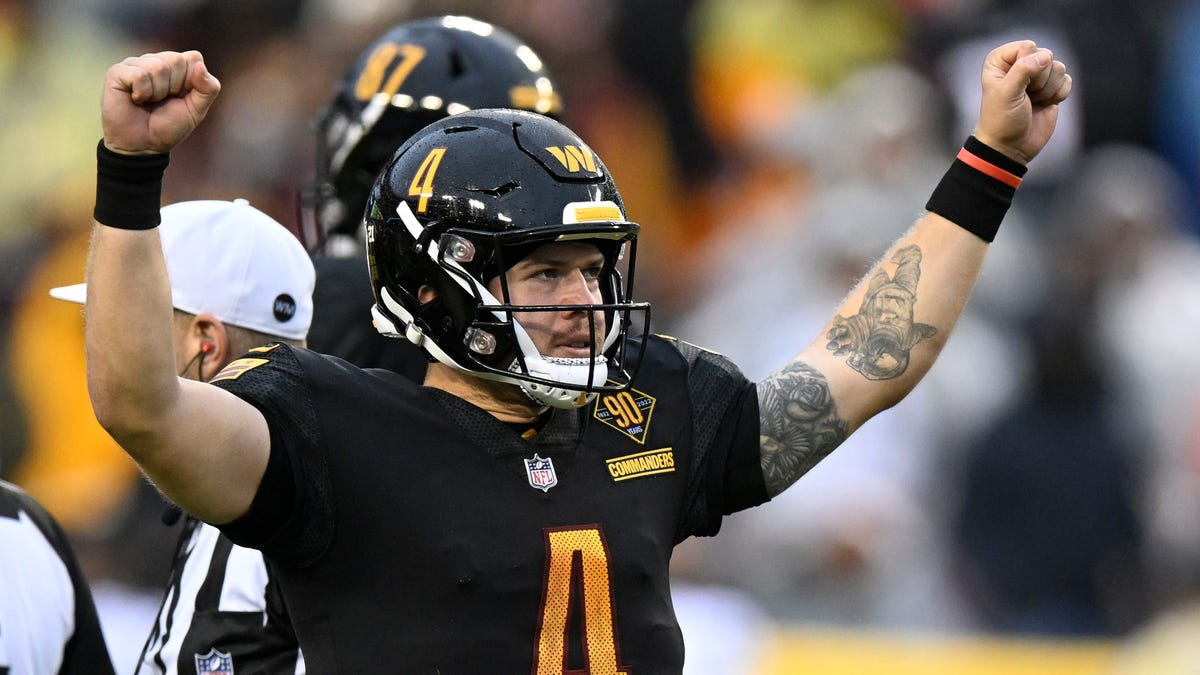 After running all over the Atlanta Falcons in what has become their offensive identity, the Washington Commanders got one last crucial play from their stout defense to preserve another important victory.

Kendall Fuller intercepted Marcus Mariota in the end zone with 58 seconds left after the pass was tipped by Daron Payne, and the Commanders beat the Atlanta Falcons 19-13 Sunday for their sixth win in seven games.

“We come in every day and work hard for each other and we have fun doing it,” said Taylor Heinicke, who threw for two touchdowns and improved to 5-1 since replacing Carson Wentz as the starting quarterback. “The defense came up huge there at the end, and Kendall just keeps making those plays.”

Antonio Gibson #24 of the Washington Commanders runs with the ball in the fourth quarter of a game against the Atlanta Falcons at FedExField on November 27, 2022 in Landover, Maryland.
(Rob Carr/Getty Images)

Fuller, who had a pick-6 last week at Houston, credited Payne with making this interception happen.

Mariota and the Falcons did the same.

“You’ve got to give credit to Washington: They made a play at the end,” coach Arthur Smith said. “Thought we had the look we wanted and the guy tipped the ball up and they caught it. Unfortunately that’s the way it went.”

Payne started running off the field after Fuller caught Mariota’s pass figuring the game was over. The Falcons would have gotten the ball back, but Ade Ogundeji ran into Commanders punter Tress Way with 32 seconds left to send Washington to its best record through 12 games since 2008.

“When you work hard, when you play hard, good things will happen,” said coach Ron Rivera, who won his 100th NFL game counting the regular season and playoffs.

Rivera said the rainy weather didn’t change his team’s approach. Playing to each team’s strength on offense regardless of the weather, the Commanders and Falcons were content to keep the ball on the ground and take some shots throwing it.

Marcus Mariota #1 of the Atlanta Falcons rolls out of the pocket in the fourth quarter of a game against the Washington Commanders at FedExField on November 27, 2022 in Landover, Maryland.
(Greg Fiume/Getty Images)

No one got it more for the Commanders (7-5) than rookie Brian Robinson Jr, who ran 18 times for a career-high 105 yards and averaged 5.8 yards an attempt three months after being shot twice in an attempted armed robbery. He also caught Heinicke’s first TD pass, getting into the end zone on a 14-yard play by bulldozing cornerback Darren Hall.

“Today was a good day on the ground,” Robinson said. “Probably because of the wet ball, we handed the ball off a lot more. I felt like the offensive line did a great job getting movement up front, moving on to the second level and just allowing me to get up on ’backers and finish.”

Heinicke also found tight end John Bates in the end zone for a 16-yard TD and finished 14 of 23 for 138 yards with an interception.

“It was a bonehead decision,” Heinicke said. “I just threw it right to the guy. It was an awful decision.”

While the Commanders bolstered their hopes of earning an NFC wild-card playoff spot, Atlanta (5-7) has now lost three of four despite surpassing 100 yards on the ground for the 10th consecutive game.

“It is tough,” said Mariota, who was 15 of 25 for 174 yards and a 4-yard TD pass to MyCole Pruitt. “These games as you’re progressing through the season get bigger and bigger. Unfortunately we didn’t pull this one out, but at the same time we’ve got to bounce back and get ready for Pittsburgh.”

Joey Slye #6 of the Washington Commanders kicks a field goal in the fourth quarter of a game against the Atlanta Falcons at FedExField on November 27, 2022 in Landover, Maryland.
(Greg Fiume/Getty Images)

Fifteen years to the day since his death, Washington unveiled a memorial for Sean Taylor on the concourse before the game: a glass-enclosed helmet, burgundy jersey, pants and cleats resembling the ones he wore on the field in mannequin form. The team retired his No. 21 last season.

Rivera opened his postgame news conference by saying, “This one was for the Taylor family.”

Falcons: OLB Arnold Ebiketie left in the second quarter with a forearm injury. … LG Chuma Edoga was inactive for the 10th time in 12 games, this time with a knee injury. Colby Gossett started in his place.

Commanders: RG Trai Turner left with an ankle injury in the second quarter and returned after halftime. … CB Benjamin St-Juste was out with an ankle injury. … DE Chase Young was ruled out several hours before kickoff because of his surgically repaired right knee and illness. Young has yet to play this season.

Taylor Heinicke #4 of the Washington Commanders celebrates after beating the Atlanta Falcons 19-13 at FedExField on November 27, 2022 in Landover, Maryland.
(Greg Fiume/Getty Images)

Sony released its latest earnings report this week, and it showed that...
32 mins ago

Sony released its latest earnings report this week, and it showed that...
32 mins ago

A new Nintendo Direct will reportedly be held next week, as Giant...
34 mins ago