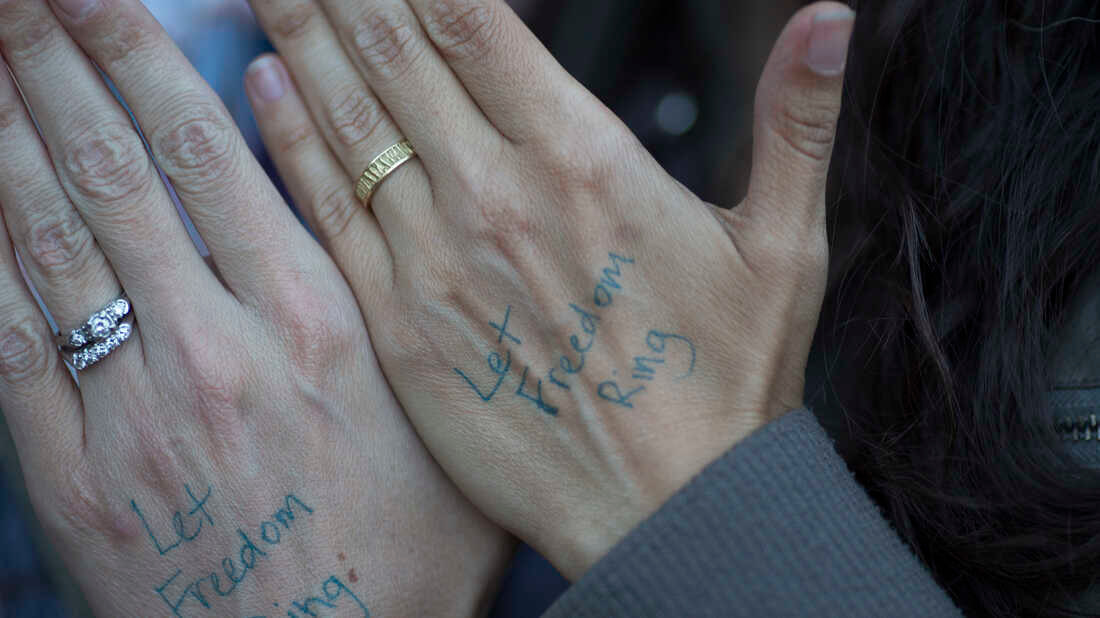 The landmark Supreme Court decision, Obergefell v. Hodges, ruled that same-sex marriage was constitutional in 2015. Now, Congress is set to move forward with The Respect for Marriage Act to codify same-sex marriages through federal protections.

Tanya McCloskey and Marcia Kadish exchanged their vows at Cambridge City Hall one early summer morning in Boston, after spending 20 years together. May 17, 2004 was a momentous day, not just for the two of them, but for the United States; that day, they became the first same-sex couple to be legally married in this country.

Back then, same-sex marriage was a deeply divisive issue in the United States. Even high-profile Democrats like former President Barack Obama were hesitant to share their support for same-sex marriage – although Obama did eventually become the first president to do so. Now, it has become a somewhat unifying issue, even within a divided government.

This week, the Senate is set to move forward with The Respect for Marriage Act (RMA) to codify same-sex and interracial marriages through federal protections. Dozens of Republicans have voted in support of the bill, including congressional leaders like Senator Thom Tillis who previously backed legislation that defined marriage as being between a man and a woman.
“It both reflects and accelerates the profound transformation of hearts and minds, as well as law and politics, around the treatment of gay people, ” says gay-rights advocate Evan Wolfson who founded the organization Freedom to Marry. The legislation would repeal the Clinton-era Defense of Marriage Act, and require that all states recognize interracial and same-sex marriages.

A Precipitous Shift in Politics and Public Opinion Alike

In 2004, when McCloskey and Kadish got married, the majority of Americans were in opposition to same-sex marriage, with about 30% in support of it. Now, polls show that over 70% of the U.S. population supports same-sex marriage, including 83% of Democrats and 55% of Republicans.
“The most difficult demographics to persuade have now come on board,” says Wolfson, pointing to support from Republicans as well as religious groups, including the Mormon church. He says the GOP’s evolution on same-sex marriage reflects the American public’s shifting opinion.

“Even conservatives, even Republicans have family members, have coworkers, have neighbors and people who are willing to open their hearts and change their minds.”

But, Wolfson says, supporting the protection of same-sex marriages is also politically strategic for Republicans. “Even though they are, in some sense, prisoners of their diminished but still present base that has extreme views that are out of touch with what the mass majority of Americans want, they can’t win with just that base.” South Carolina Republican Rep. Nancy Mace, who voted in favor of RMA in the House, reflected these sentiments when she said, “There are gay conservatives out there. And we just want to make sure they have a home.”

When we actually look at attitudes towards same sexuality in the past, it doesn’t look like a straight line at all.

A Brief History of Same-Sex Marriage in the U.S.

When same-sex marriage came into the forefront of mainstream American politics, conservatives often argued that it was a novel idea, as when Supreme Court Justice Samuel Alito said same-sex marriage is an “institution which is newer than cellphones or the internet” during oral arguments on California’s Proposition 8. But there isn’t exactly “a historical starting point for same sex marriage anymore than there is a historical starting point for marriage between men and women,” says Rachel Cleves, who is a professor of history at the University of Victoria and has studied same-sex relationships that go as far back as the 1800s.

In the wake of the 1969 Stonewall riots, the modern American gay rights movement gained momentum, with leaders like Sylvia Rivera and Marsha P. Johnson emerging, and made major political strides. However, it wasn’t until the 1990s that efforts to legalize same-sex marriage began to pop up across the country. Civil unions for same-sex couples existed in several states, often with “separate but equal” standards — same sex couples were denied access to more than 1000 federal rights that came with marriage for heterosexual couples. Then, in 1996, the Defense of Marriage Act (DOMA) was signed into law, defining marriage as an agreement shared between a man and a woman.

In 2003, gay rights advocates celebrated a win when the Supreme Court struck down sodomy laws in the Lawrence v. Texas decision and Massachusetts became the first state to legalize same-sex marriage. Though federal politicians, including President George W. Bush, opposed same-sex marriage, states began taking matters into their own hands, striking down bans and codifying same-sex marriage into state laws.

About a decade later, Edith Windsor challenged the Defense of Marriage Act and, in 2013, the Supreme Court deemed DOMA unconstitutional, though the decision was limited to 13 states and the District of Columbia. Two years later, in the landmark decision Obergefell v. Hodges, the Supreme Court held that same-sex marriage was a constitutional right in the U.S. and required all 50 states to perform and recognize such unions. That ruling is widely considered to be the most important same-sex marriage legislation in the U.S. and a turning point in the fight for gay rights.

Jim Obergefell and fellow plaintiff Luke Barlowe hug as they exit the Supreme Court on April 28, 2015 after oral arguments concerning whether same-sex marriage is a constitutional right.

Despite increasing public and political support for same-sex marriage, the road to legalization and marriage equality has not been a straightforward one.

“We have a popularized notion of the history of same-sex sexuality, which sees the past as undifferentiated, homophobic, and then there was a period of progress. But when we actually look at attitudes towards same sexuality in the past, it doesn’t look like a straight line at all,” says Cleves.

“We’ve just seen this extreme outburst of homophobia in the public sphere and in politics in the last year. And I think that same-sex marriage is under dire threat, so I find this legislation critically important.”

The push to codify marriage rights with the Respect for Marriage Act comes in the wake of the Supreme Court’s decision in Dobbs v. Jackson, which held that access to abortion was not a Constitutional right. Justice Clarence Thomas noted in his concurring opinion that the rationale used to overturn Roe v. Wade could be used to overturn cases establishing other rights. This led advocates to fear that same-sex and interracial marriage might be next.

In 2021, state legislatures introduced a record number of anti-LGBTQ bills, especially those targeting trans youth. LGBTQ advocates and even lawmakers have linked such legislation to the rise in hate crimes against LGBTQ people, including the deadly shooting at a queer Colorado nightclub last week.

When asked how he reconciles the passage of same-sex legislation through Congress with the ways in which queer people are under assault in much of the US, Evan Wolfson says, “Persuasion is not enough, even though it’s an essential element. It’s why you also need political engagement,” to which he attributes much of the success of the same-sex marriage movement. For other LGBTQ rights to find similar success, he says political engagement needs to happen not only on the federal level but at the states.

Historian Rachel Cleves also sees the Respect for Marriage Act as a starting point for equal rights in America. “I hope that political support for sexual and gender diversity does not end at this stopgap measure for protecting same sex marriage, but extends to protecting the rights of trans people, trans youth, to gender affirmation and gender expression.”

PrevPreviousPablo Eisenberg, a fierce critic of nonprofits and philanthropy, died at age 90
NextThe Buffalo Tops shooting suspect is expected to plead guilty to murder chargesNext
Back to Feed

The release of Dead Space Remake last month has been warmly received...
23 mins ago

Nick Offerman, who starred in the latest episode of HBO's The Last...
47 mins ago

Sony released its latest earnings report this week, and it showed that...
47 mins ago

Sony released its latest earnings report this week, and it showed that...
47 mins ago

A new Nintendo Direct will reportedly be held next week, as Giant...
49 mins ago