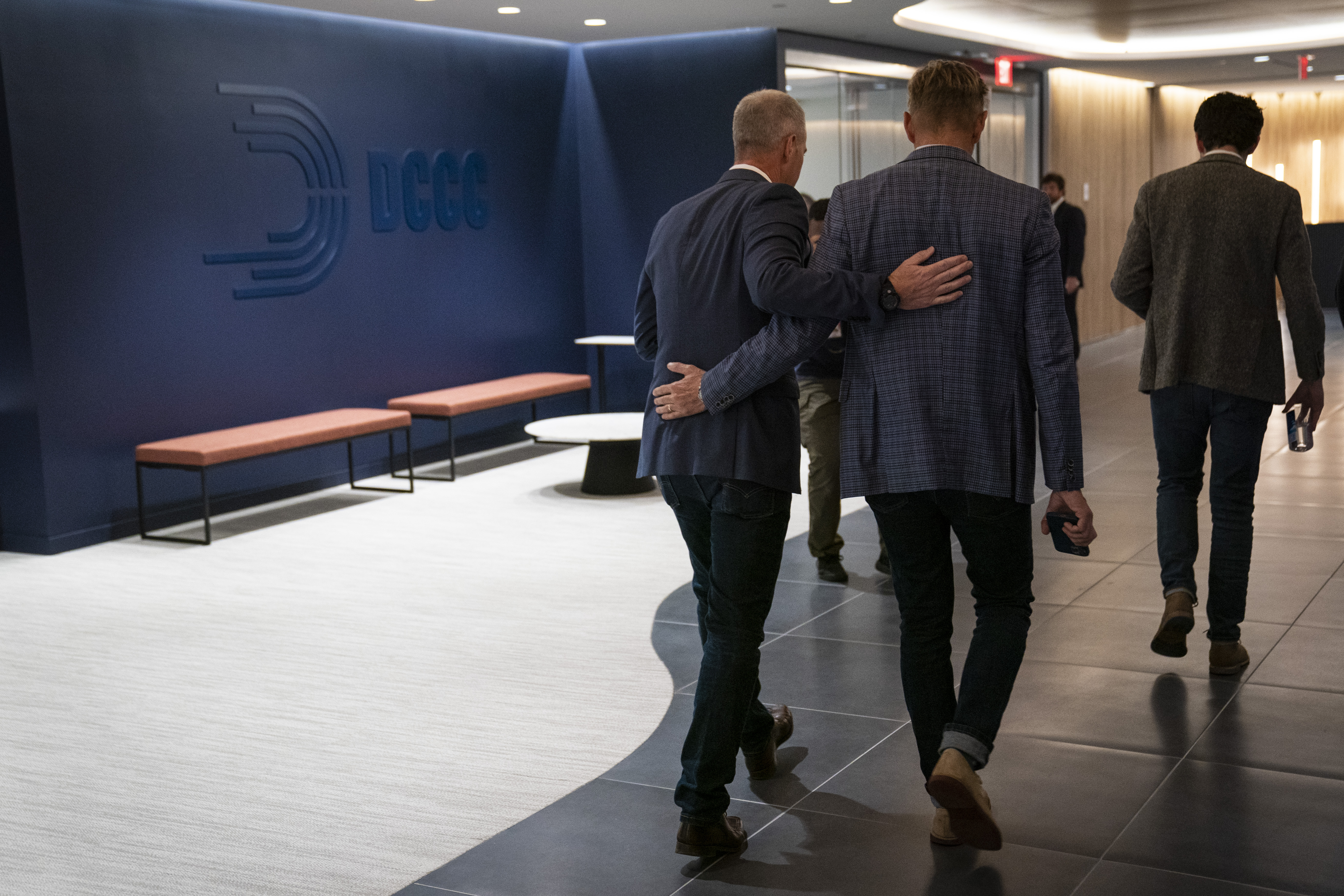 Sean Patrick Maloney departs with husband Randy Florke from a news conference at the DCCC on Nov. 9, 2022, in Washington, D.C. | Sarah Silbiger/Getty Images

House Democrats have tapped Julie Merz, a veteran of Rep. Steny Hoyer’s office, as the executive director of their campaign arm.

Merz most recently served in Hoyer’s office as the former majority leader’s director of member services. She also previously served as the head of Hoyer’s leadership PAC, AMERIPAC.

“In order to move our country forward and restore sanity to the halls of Congress, it’s critical that we elect Democratic leaders who will stand up for reproductive freedom, everyday families, and democracy – and reject a Republican party that bows to authoritarianism, prioritizes special interests, and embraces MAGA extremism,” Merz said in a statement announcing her new position obtained first by POLITICO.

The DCCC got a later-than-usual start staffing up its 2024 operation. The caucus punted the decision to House Minority Leader Hakeem Jeffries (D-N.Y.) after voting to once again make the position appointed instead of elected. Jeffries ultimately tapped DelBene over Reps. Ami Bera (D-Calif.) and Tony Cardenas (D-Calif.), the only two members who were publicly vying for the position.

“Julie’s experience and knowledge of the House and tough campaigns, her courage, and strong leadership will be a tremendous asset in our caucus’ fight to flip the House back to Democratic control in 2024,” DCCC chair Suzan DelBene (D-Wash.) said in a statement.

Merz most recently served in Hoyer’s office and previously worked at the DCCC’s independent expenditure arm in 2012. She has also been the campaign manager and district director over multiple cycles for former Rep. Dennis Moore (D-Kan.), who’d been a battleground member. She also worked for then-Assistant to the Speaker Rep. Chris Van Hollen (D-Md.) in member services.

House Democrats had a much better-than-expected midterm cycle. Defying predictions of a red wave, the majority of their incumbents survived, though Republicans did still win a razor-thin majority. Party operatives are optimistic about their chances to retake the House in a presidential election year.

The National Republican Congressional Committee will be chaired in 2024 by Rep. Richard Hudson (R-N.C.), but the committee has not yet named an executive director. Its outgoing executive director, John Billings, resigned in mid-November amid complaints about improper behavior.

1:46 PM ETSan Francisco 49ers running back Elijah Mitchell is inactive for...
43 mins ago

Editor’s Note: Lynda Lin Grigsby is a journalist and editor who has...
54 mins ago