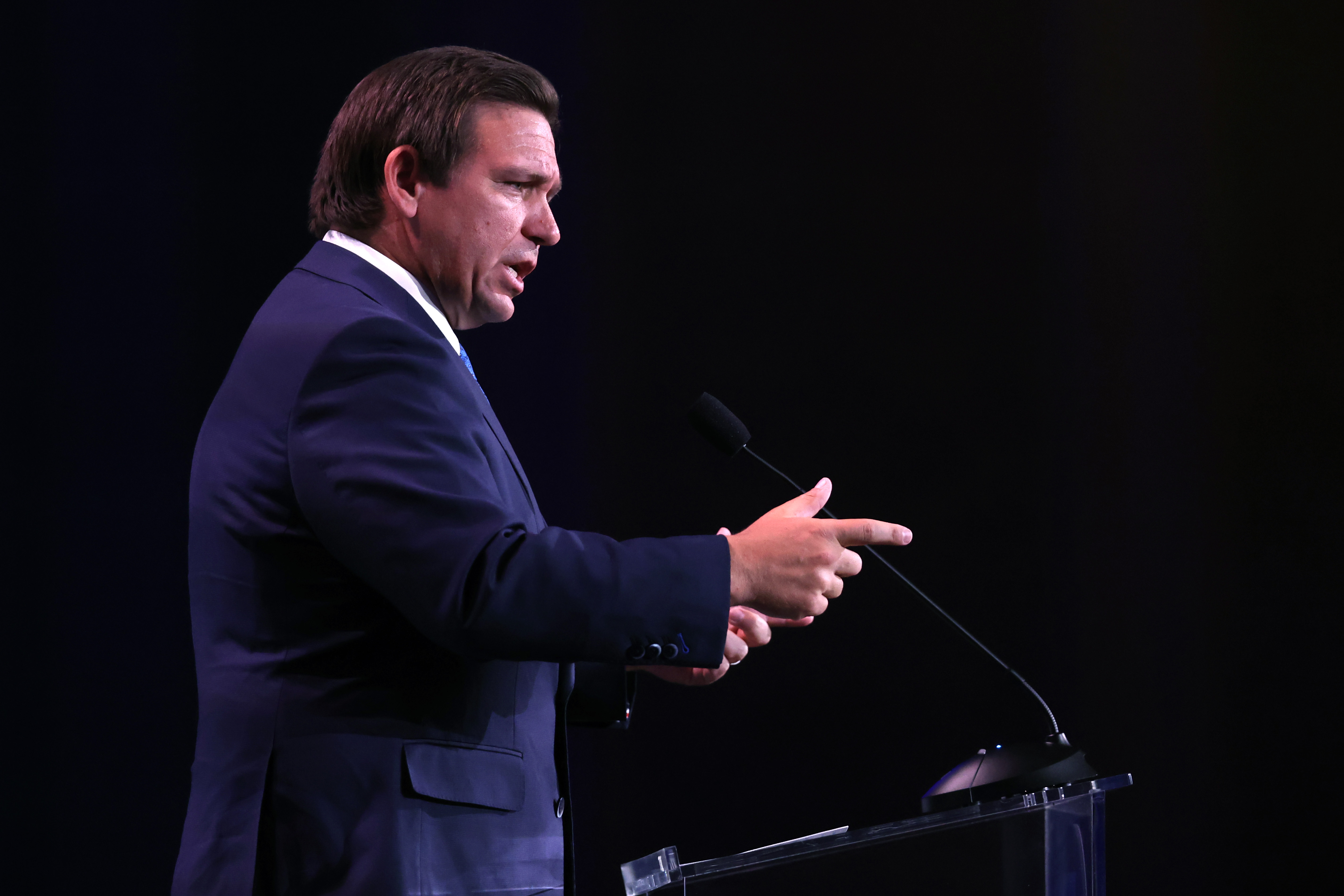 Gov. Ron DeSantis said that he supports banning the course being offered to some high school students because its lessons delve too far into political agendas. | Scott Olson/Getty Images

The Republican governor said that he supports banning the course being offered to some high school students because its lessons delve too far into political agendas, broaching topics such as queer studies and abolishing prisons. Black officials in the state, from Democratic lawmakers to faith leaders, however, are seeking to overturn the DeSantis administration’s determination that the class “significantly lacks educational value.”

Yet during a press conference Monday, DeSantis showed no signs of reversing the decision to bar the course in Florida. The College Board, the organization responsible for administering standardized tests like the SATs, had spent a decade developing the African American studies AP course and is offering it to more than 60 schools the country as a pilot program.

“When I heard it didn’t meet the standards, I figured, yeah, they may be doing CRT,” DeSantis told reporters at an event in Jacksonville. “It’s way more than that.”

In Florida’s latest crackdown on how race is taught in schools, state education officials earlier this month rejected the African American studies course from being implemented. The move drew swift backlash in the state and beyond, racking up criticism from by academics, advocacy groups and liberal policymakers including the Biden administration, which on Friday said that blocking the course was “incomprehensible.”

A coalition of Black faith leaders is now pushing to meet with the DeSantis administration over its decision to block students from taking the course and is planning a march on the capitol in Tallahassee next month. They join a chorus of Black state lawmakers who have denounced the move by the Florida Department of Education, claiming it is an attempt to whitewash history.

“When you devalue my history, and say it lacks educational merit, that is demeaning to us,” Rev. R. B. Holmes, Jr., pastor of Bethel Missionary Baptist Church in Tallahassee, told reporters Monday. “And it may be a problem in messaging, maybe they didn’t mean it that way. It already has national attention.”

Florida’s move to block the course follows a concerted effort by state republicans to restrict how race is taught in local classrooms. Under DeSantis, the state Education Department has rejected math textbooks over “impermissible” content, including teachings on critical race theory — something that Florida banned in education, along with the 1619 Project, through official action by its Board of education.

After the decision came to light last week, Florida’s education agency elaborated on rejecting the course in a tweet spelling out concerns with its lessons. The state took issue with several pieces of the College Board’s syllabus, such as parts on “Black Queer Studies,” advocacy for reparations, activism and intersectionality, which is a piece critical race theory, according to state’s education department.

Yet the agency’s defense did little to stem the criticism. Vice President Kamala Harris, who visited Tallahassee on Sunday to commemorate the 50th anniversary of Roe v. Wade, criticized “extremist so-called leaders” who block history classes and prevent teachers from discussing “who they are and who they love” — a reference to the state’s controversial law banning educations from leading classroom discussions on sexual orientation or gender identity for students in kindergarten through third grade.

“Every student in our nation should be able to learn about the culture, contributions, and experiences of all Americans — including Black Americans — who shaped our history,” Harris said.

Florida’s GOP-controlled statehouse in 2022 passed legislation to expand state anti-discrimination laws and prohibit schools and companies from leveling guilt or blame to students and employees based on race or sex. Dubbed the “Stop WOKE Act” by DeSantis, it created new protections for students and workers, including that a person should not be instructed to “feel guilt, anguish, or any other form of psychological distress” due to their race, color, sex or national origin.

Florida law requires public schools to teach students about the history of African Americans, including the “enslavement experience,” and steer them to develop an “understanding of the ramifications of prejudice, racism, and stereotyping on individual freedoms.” But the College Board lessons, according to DeSantis, are “pushing an agenda” on students.

“That’s the wrong side of the line for Florida standards. We believe in teaching kids facts and how to think, but we don’t believe they should have an agenda imposed on them,” DeSantis said Monday. “When you try to use Black history to shoehorn in queer theory, you are clearly trying to use that for political purposes.”

PrevPreviousThe Last Of Us TV Show Creators Discuss Backlash About Changes From The Game
NextMcKinsey, eyeing the MLOps space, buys Tel Aviv-based IguazioNext
Back to Feed