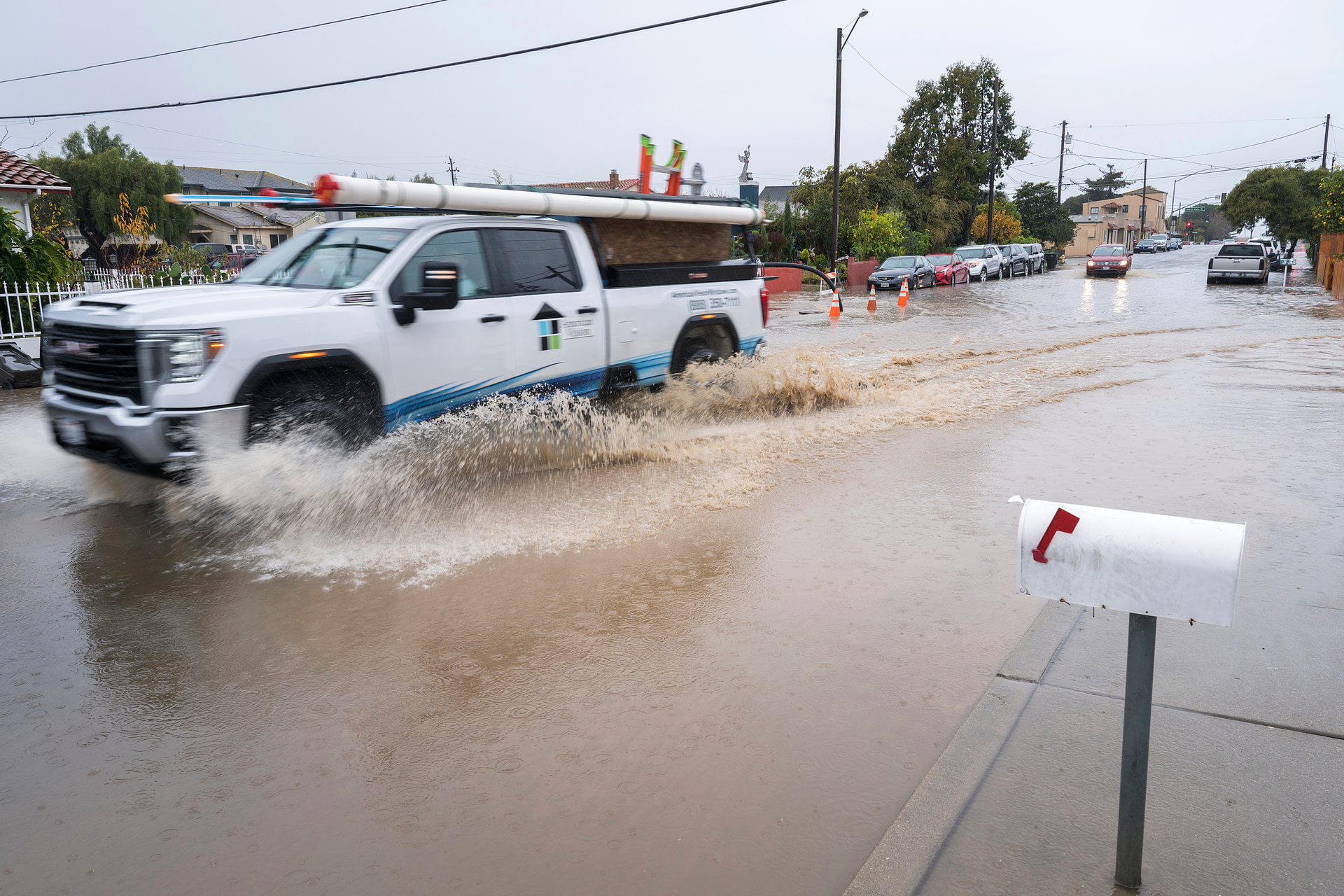 A truck drives through a flooded intersection in Salinas, Calif., on Dec. 27, 2022. | Nic Coury/AP Photo

A powerful storm heading toward California prompted Gov. Gavin Newsom to declare an emergency Wednesday, with large parts of the state expected to face flooding, power outages and hazardous conditions.

The storm was part of what the National Weather Service said was a “bomb cyclone” series of systems that left thousands without power in Northern California and forced the temporary closure of two major highways due to flooding. At least one person was killed.

State authorities stockpiled emergency supplies, urged people to avoid non-essential travel and said the National Guard would be ready to respond if needed. Dangerous conditions were expected for days.

“This is storm one of at least three or four,” said Brayden Murdock, a National Weather Service meteorologist in Monterey. “The forecast looks quite unsettled through the week and into the weekend, even next week.”

Wet winters used to be the norm in California but the state has suffered in recent years through repeated cycles of severe drought, with 2022 the second-driest year in 128 years. Accumulated snow in the Sierra Nevada is at about 174 percent of the average for this time of year but officials said they won’t be able to make determinations about the state’s vast water storage systems until March or April.

The state’s Office of Emergency Services was preparing to respond to mudslides in wildfire-scarred parts of the state that were bone-dry just months ago. Utility companies were warning customers of potentially lengthy outages.

California’s Department of Water Resources said it planned to help farmers reinforce and repair levees that hold back rising rivers. Several broke during the New Year’s Eve weekend, a factor in the flooding that closed a section of Highway 99 in the Central Valley — the state’s agricultural heartland. Drivers were stranded in the rising waters, prompting helicopter rescues and the one reported death.

The still-soggy ground in the Central Valley increased the risk that wind gusts, which were forecast to reach speeds of 50 to 60 miles per hour, would knock over destabilized trees. Forecasters and officials also expected urban flooding. In the San Francisco Bay Area, the city of Richmond recommended the evacuation of about 15 homes in the Seacliff neighborhood because of the potential for mudslides from nearby hills.

The storms underscore the cyclical nature of a disaster-prone state that is highly susceptible to more dramatic weather fluctuations due to climate change, which has doubled the risk of a “megaflood” that could cause catastrophic flooding, according to a paper recently published in Science Advances.

So far, the January storms haven’t differentiated themselves from historical patterns, Mark Anderson, the state climatologist, told reporters. But state scientists are watching for anomalies in the pace of the storms, their size and where they’re falling, he said.

While damage estimates aren’t yet available, local officials are already comparing the rains to those that came in 2017, prompting evacuations of more than 150,000 people below Oroville Dam, one of the state’s largest.

“At this point we would say it’s just as bad,” said county spokeswoman Kim Nava.