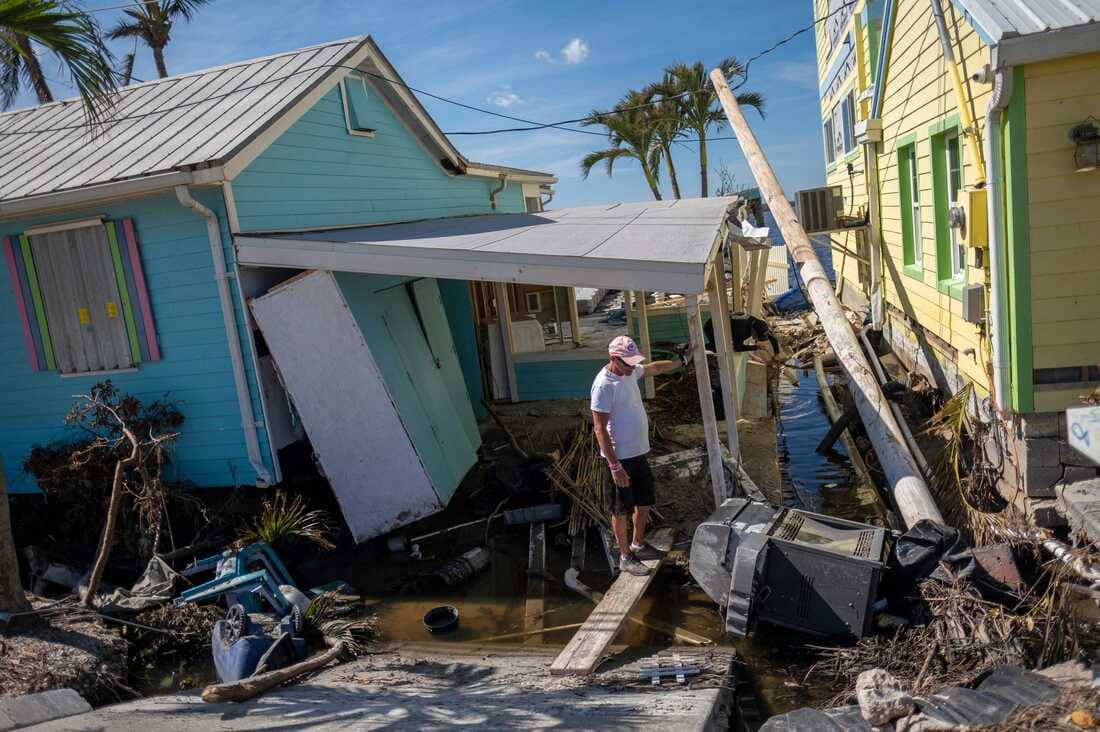 A man stands in front of his destroyed house in the aftermath of Hurricane Ian in Matlacha, Florida on October 3, 2022.

Even before Hurricane Ian made landfall in Florida last week, the state’s property insurance market was already in its own state of disaster.

Homeowners in Florida pay the highest premiums in the country: nearly three times the national average, according to the Insurance Information Institute, an industry group. And Floridians’ premiums are rising much faster – about 33% each year – than the typical American’s annual increase of 9%.

But in Florida, hurricanes aren’t the only factor driving up costs. Rampant litigation and soaring reinsurance costs are other components, experts say.

Six insurance carriers have declared insolvency this year alone. Others have dropped customers or stopped writing new policies. As a result, the number of policyholders on the state-backed insurer of last resort, Citizens Property Insurance, has ballooned.

Now, as Floridians look to recover from an estimated tens of billions of dollars in damage caused by the Category 4 storm, some have worried that Ian could be the final straw for even more private insurers, driving up costs and sending Florida’s precarious insurance market closer to catastrophe.

“The simple truth is you can’t be the most hurricane-prone state and the most litigious state, and expect lower property insurance rates,” said state senator Jeff Brandes, whose district covers part of Pinellas County in the Tampa Bay region, which avoided the worst of Ian.

Even though no hurricane made landfall on Florida in 2020 or 2021, the state’s insurance industry reported net underwriting losses exceeding $1 billion each year. Even before Ian, 2022 was already projected to be the same.

The average premium for homeowners has topped $4,000 per year in five different Florida counties, mostly in the Miami and Palm Beach areas, according to a state report from July. In Monroe County, home to the Florida Keys, the average premium is $6,700. Nationally, home insurance costs about $1,600 per year on average.

“We were in crisis three years ago. But we are in wholesale collapse at this point,” Brandes said.

Florida accounts for most of the country’s insurance lawsuits

A major piece of the problem in Florida is insurance litigation. “What we’ve been facing in Florida for many years is a man-made crisis, nothing to do with hurricanes,” said Mark Friedlander, a spokesperson for III, in an NPR interview this week. “We’ve got a real problem on our hands here.”

A handful of different factors unique to Florida have combined to create such a litigious environment, experts say, including unique rules around attorneys’ fees and lax regulation of “assignment of benefits” agreements for policyholders.

The lawsuits often originate like this: A contractor contacts a homeowner about potential damage, perhaps to their roof. The homeowner signs what’s called an assignment of benefits agreement, which allows the contractor to handle the insurance claim. The insurance company can then deny the claim or dispute the amount, and then the contractor can file suit against them– sometimes even without the knowledge of the policyholder.

Attorneys’ fees can dwarf the size of the disputed claim. In 2019, the III estimated that excess litigation had collectively cost Floridians policyholders $1.6 billion. The number of lawsuits has risen even higher over the past two years.

Insurance companies operating in Florida say they have been forced to raise rates to cover the costs of handling lawsuits. “We’re all paying for that frivolous litigation,” said Lisa Miller, a former deputy Florida insurance commissioner who now works as an insurance industry consultant in Tallahassee.

A member of the City of Miami Florida Task Force 2 Search and Rescue team checks a home for victims in the wake of Hurricane Ian in Fort Myers Beach, Florida on October 3, 2022.

Hurricanes in Florida have gotten costlier in recent years. That’s due partly to climate change, which can intensify hurricanes and cause more rain and flooding.

Florida’s population growth is another factor. No state in the eastern U.S. is growing as rapidly as Florida. And its fastest-growing metro areas include Orlando, Tampa and Cape Coral-Fort Myers – all areas affected by Ian.

These days, Florida’s private insurance market is primarily made up of small, regional companies, or Florida affiliates of national insurers.

Smaller companies aren’t able to build the same kinds of capital reserves as large ones. As a result, they often rely on their own form of insurance – known as reinsurance – to pay out claims during major costly events.

Those costs get passed along to consumers, Miller said. Between 35% and 50% of a homeowner’s insurance premium goes toward the cost of reinsurance.

Citizens, the state-backed insurer, recently crossed the 1 million policyholder mark – more than double its number of policies two years ago – as a result of private insurers raising costs or dropping customers.

Because Citizens is state-backed, it is limited in its ability to increase rates and is often significantly cheaper than competitors. Private insurers say that makes it difficult to compete, especially in storm-prone ZIP codes where only a handful of insurers offer policies.

Even as damage estimates rise, officials have expressed confidence that insurers will be able to pay out Hurricane Ian claims.

It is too early to know exactly how much the claims will cost. One analytics firm estimated that wind and storm surge losses would be between $28 and $47 billion. Another estimate of the total loss to private insurers put the total as high as approximately $63 billion.

It’s possible the state could see a million total claims across all types of insurance, including flood insurance, said Miller, the insurance industry consultant. (Most Florida homes affected by Ian did not have flood insurance, and there are likely to be legal disputes over whether damage was caused by wind or flood.)

The fear is that such a massive payout from a single storm could be the final straw for companies already struggling to deal with the other challenges of doing business in Florida.

If rates continue to rise by 30% or more, as they have done for many Floridians in recent years, some Florida homeowners may end up paying more for insurance than they do for their mortgage, said Brandes, the state legislator.

“You’re going to price the middle class out of residential homeownership. That’s just not sustainable,” said Brandes, who said the cost of his own home insurance has risen about 60% in the past two years. “It is the Achilles heel of our real estate market across the state.”

The state legislature held a special session in May in which legislators passed a bill addressing some of the issues with roofs and attorneys’ fees. Afterward, some Democrats complained that the bill did not do enough to provide immediate relief to homeowners.

The May session “treated the flu when the property insurance market had stage-4 cancer,” said Brandes, a Republican, who added that he hoped another session could be convened before January.

“This is the perfect opportunity to make some really tough decisions,” he said. “You’re going to have to do some things that historically have just not been on the table, but have to be on the table in order to save this market going forward.”

PrevPrevious66 clinics across 15 states have stopped offering abortions post-Roe
Next‘We told you so’: For Black athletes racism from college fans is a familiar storyNext
Reddit
Facebook
Twitter
LinkedIn
WhatsApp
Email
Back to Feed

TALLAHASSEE, Fla. -- A statewide grand jury empaneled at the request of...
17 mins ago

The long winter nights are a great time to unplug and unwind...
35 mins ago

It’s Monday morning. Groggy from a lack of caffeine, you pull into...
36 mins ago

2:08 PM ETAlberta Gaming, Liquor and Cannabis on Friday reinstated betting on...
39 mins ago

ST. PETERSBURG, Fla. -- Production of oranges in Florida this season is...
40 mins ago
Load More