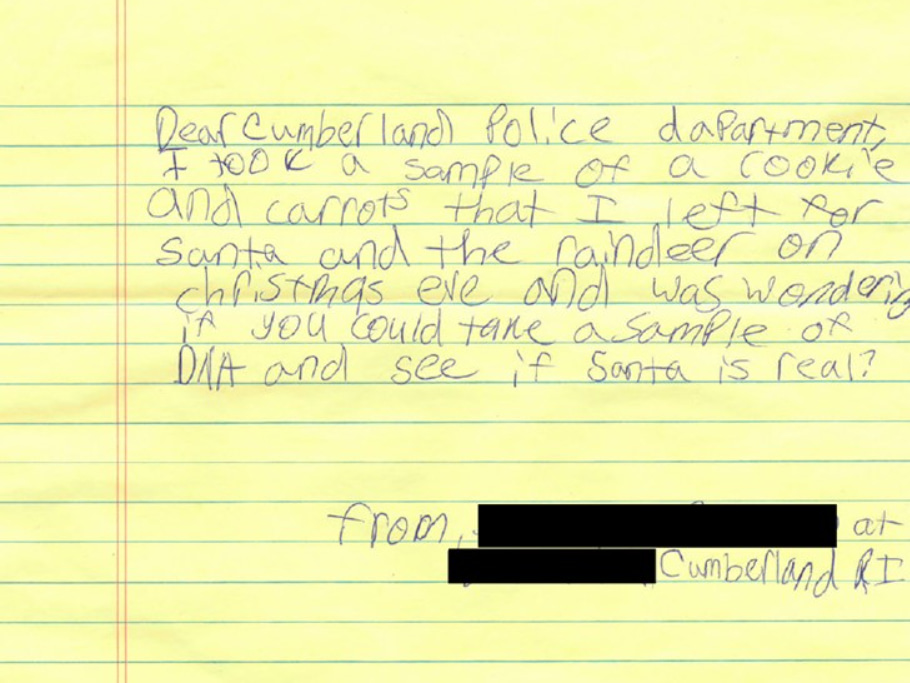 A young girl’s note to the police department asked to test for evidence of Santa.

A local police department in Rhode Island has received an unusual query: running a DNA test on evidence to prove the existence of Santa Claus.

The authorities in Cumberland, north of Providence, received a handwritten letter from a young girl earlier this month, according to a press release on Friday.

The young girl asked the police to run a DNA test on a partially eaten cookie and carrot remains presumably consumed by Santa Claus and some of his nine reindeer on Christmas Eve. The food remains were forwarded to the state’s Department of Health-Forensic Sciences Unit for analysis, police said.

“This young lady obviously has a keen sense for truth and the investigative process and did a tremendous job packaging her evidence for submission,” Cumberland’s police chief, Matthew J. Benson, said in the release. “We will do our very best to provide answers for her.”

PrevPreviousMost Americans say overturning Roe was politically motivated, NPR/Ipsos poll finds
Next50 years after Roe v. Wade, many abortion providers are changing how they do businessNext
Back to Feed

A Russian national was indicted for helping an oligarch evade US sanctions...
60 mins ago