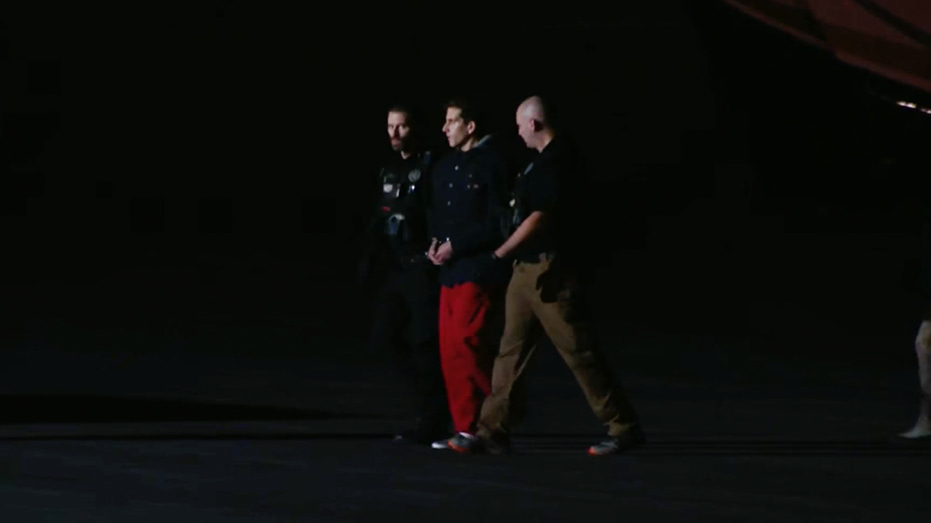 MOSCOW, Idaho — Bryan Kohberger flew into Pullman, Washington, Wednesday evening and is expected to face murder charges in Moscow, Idaho, in connection with the brutal killings of four college students in an off-campus house in November. From the airport he was taken to the Latah County Courthouse in Moscow, Idaho, by truck.

Kohberger, 28, has been in custody since Dec. 30 when authorities raided his parents’ home in Monroe County, Pennsylvania. He was flown to Idaho on a Pennsylvania State Police plane a day after he waived his extradition to Idaho on Tuesday.

The suspected killer left on a Pennsylvania State Police Pilatus PC-12 single-engine turbo-prop plane, which has a range of 1,800 nautical miles and a max speed of more than 300 MPH, out of Wilkes-Barre Scranton International Airport around 7 a.m. PT Wednesday, flight records show.

The plane then departed Champaign, Illinois, around 10 a.m. PT, likely to refuel, and then took off again headed west around 11 a.m. PT. There was another stop in Rapid City, South Dakota, and took off again around 3 p.m. PT. By 6:22 PT, police escorted Kohberger off the plane in Pullman, Washington, across the state line and just 7 miles from the Idaho crime scene.

Bryan Kohberger is escorted off of a plane by law enforcement in Pullman, Washington on Wednesday, January 4, 2023. Kohberger has been extradited from Pennsylvania to face charges for the murder of four University of Idaho students in November last year.
(Fox News Digital)

Internet sleuths from across the globe on Wednesday tracked the nearly 12-hour flight across three time zones from the time it took off to the time it landed. The flight had 19,000 viewers as of Wednesday evening on the Flight Radar app.

A plane carrying Bryan Kohberger is lands in Pullman, Washington on Wednesday, January 4, 2023. Kohberger has been extradited from Pennsylvania to face charges for the murder of four University of Idaho students in November last year.
(Fox News Digital)

The four victims, 20-year-olds Ethan Chapin and Xana Kernodle, who were in a relationship, and 21-year-olds Kaylee Goncalves and Madison Mogen, were stabbed multiple times, likely while sleeping, on the second and third floors of a six-bedroom house just steps off the University of Idaho campus, according to Latah County Coroner Cathy Mabbutt. Two roommates on the lowest level were not attacked. The victims and their roommates were students at the University of Idaho.

Kohberger was pursuing a doctorate in the Criminal Justice and Criminology Department at Washington State University, 7 miles away from UI. He had driven with his father in a 2015 white Hyundai Elantra from Pullman, Washington to Pennsylvania before authorities caught up with him.

Police said they were looking for a 2011 to 2013 white Elantra that was believed to have been seen near the crime scene.

Ethan Chapin, 20, Xana Kernodle, 20, Madison Mogen, 21, and Kaylee Goncalves, 21, along with the women’s two other roommates in Kaylee Goncalves’ final Instagram post, shared the day before the slayings.
(@kayleegoncalves/Instagram)

Local and federal authorities used DNA evidence to track down the accused killer nearly seven weeks after the four students were found killed in the early morning hours of Nov. 13.

Kohberger’s family members said in a statement that they “have fully cooperated with law enforcement agencies in an attempt to seek the truth and promote his presumption of innocence rather than judge unknown facts and make erroneous assumptions.”

A view of the Sigma Chi house at the University of Idaho through fog on Dec. 13, 2022. Inset: A reference image showing the type of Hyundai Elantra police were looking for in their search for Bryan Kohberger.
(Michael Ruiz/Fox News Digital. Inset: Moscow PD)

Prior to the attacks, Chapin and Kernodle were seen at a party at the university’s Sigma Chi fraternity house on campus around 9 p.m. on Nov. 12, a Saturday. They returned home around 1:45 a.m. on Nov. 13. Goncalves and Mogen spent the evening of Nov. 12 in downtown Moscow, stopping at a popular college bar and then a food truck on the way home. The returned to the house around 1:56 a.m.

Officials believe the victims were stabbed between 3 a.m. and 4 a.m. that morning. Around noon that day, Moscow police officers responded to a 911 call reporting an “unconscious person” from the house where the murders occurred, but several people had gathered at the crime scene by the time police arrived, officials said.

Bryan Christopher Kohberger is seen for the first time since his arrest Friday outside the Monroe County Courthouse in Stroudsburg, Pennsylvania. He’s accused of the Moscow, Idaho, quadruple homicide.
(The Image Direct for Fox News Digital)

The Moscow Police Department continues to urge the public to submit any images or information that they think could be important or useful to their investigation. They can do so by calling 208-883-7180, submitting tips through tipline@ci.moscow.id.us and sending digital media here.

Audrey Conklin is a digital reporter for Fox News Digital and FOX Business. Email tips to audrey.conklin@fox.com or on Twitter at @audpants.