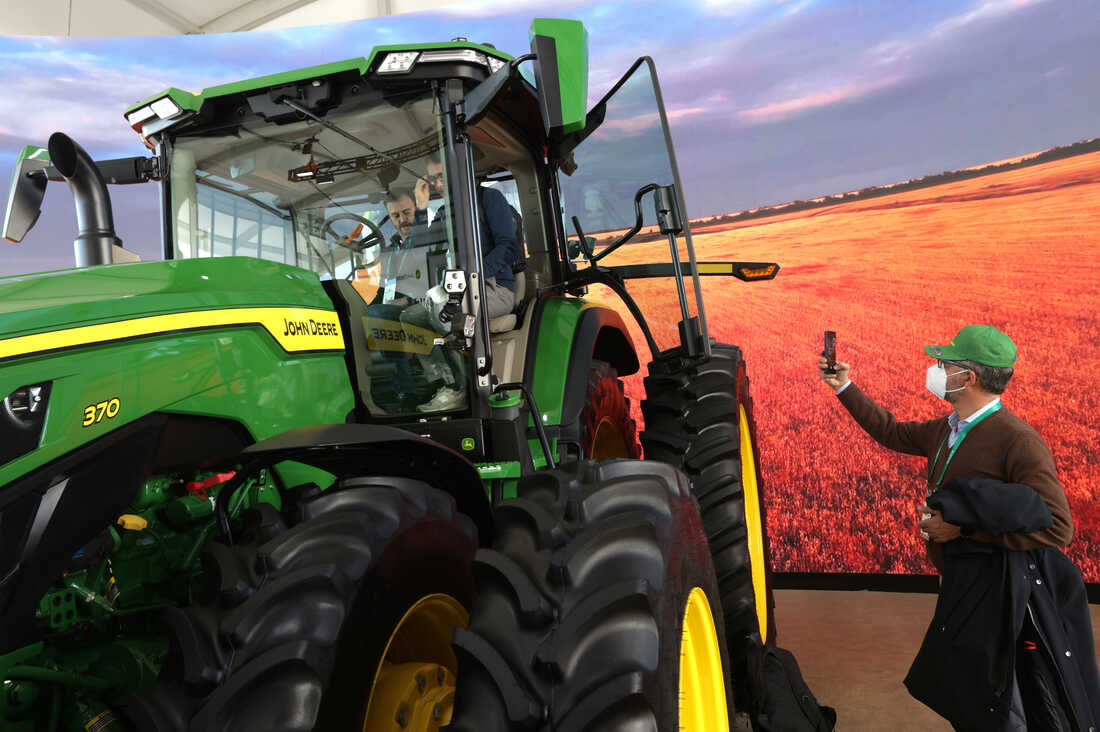 John Deere vows to open up its tractor tech, but right-to-repair backers have doubts

A John Deere autonomous tractor is on display at CES 2022 in Las Vegas, Nevada.

Like many parts of modern life, tractors have gone high-tech, often running on advanced computer systems.

But some manufacturers are tight-lipped about how these electronics work, making it difficult or nearly impossible for farmers and independent repair shops to diagnose and fix problems with the equipment.

An agreement by John Deere may finally give farmers a greater hand in repairing the company’s products.

The American Farm Bureau Federation announced Sunday that it had reached a memorandum of understanding with John Deere promising farmers and independent repair shops information they would need to service the company’s equipment.

The company said the agreement “reaffirms the longstanding commitment Deere has made to ensure our customers have the diagnostic tools and information they need to make many repairs to their machines.”

But some in the agricultural field worry that the latest agreement doesn’t go far enough and is a veiled attempt to stave off the passage of “right-to-repair” legislation at the federal and state levels.

“There’s no commitment from anyone to enforce it,” Walter Schweitzer, president of the Montana Farmers Union, told NPR.

Schweitzer, a third-generation farmer and rancher, questioned why John Deere would reach a private agreement and pointed to a provision that allows the company to pull out of the memorandum if any right-to-repair legislation is enacted.

“If they truly, honestly wanted to give farmers and ranchers and independent repair shops the right to repair equipment, why are they so afraid of legislation that authorizes that?” he added.

The deal comes after years of pressure from farmers and right-to-repair advocates urging John Deere to make it easier to identify and repair problems with its popular yellow and green tractors and farm equipment.

Under the memorandum of understanding, farmers and independent repair shops will be able to buy access to John Deere’s software, manuals, and other information need to service their equipment.

Previously, farmers generally had to wait for technicians from the company and authorized repair shops for fixes.

The federation and John Deere have also agreed to meet at least twice a year to discuss any issues related to the deal.

Sam Kieffer, the American Farm Bureau Federation’s vice president of public policy, told NPR that the group preferred to reach a private agreement with the company.

“Our members asked us to pursue a private sector agreement, and our members wanted to avoid a patchwork quilt of different rules across state lines, recognizing that manufacturers — not just Deere, but manufacturers in general — will need to be operating at the national level, even internationally,” Kieffer said.

The federation agreed to encourage state farm bureaus to “refrain from introducing, promoting, or supporting federal or state ‘Right to Repair’ legislation that imposes obligations beyond the commitments in this MOU.”

Under the agreement, John Deere can also protect its trade secrets and bar users from overriding safety features in its equipment.

Kevin O’Reilly, the right-to-repair campaign director at the Public Interest Research Group, said the memorandum of understanding appeared to be a step forward but noted that Deere and other manufacturers have made similar promises in the past.

“If this document, if this MOU, completely comes through on what it’s stated to do, then this would be a win for farmers,” O’Reilly told NPR. “But we’re not totally convinced that that will be the case.”

John Deere noted that it currently provides customers some diagnostic tools to identify problems with their equipment.

But according to Schweitzer, many farmers can be blocked from diagnosing or fixing problems with their tractors, combines, and other equipment and are forced to wait for a John Deere technician to be available.

He said in the past he’s had to wait weeks for John Deere to fix his tractor, a significant chunk of time for farm equipment to be out of commission.

“Rain can wreck a crop in two, three hours. A hailstorm can destroy your whole crop in just a matter of minutes,” Schweitzer said. “If you’re sitting there with a $100,000 or a $500,000 piece of equipment that you can’t repair, then you’ve got a paperweight. What good is that?”

President Biden issued an executive order in July 2021 encouraging the Federal Trade Commission to make rules cracking down on manufacturers that limit users and third party companies from repair their electronics.

Shortly after, the FTC said it would devote more resources to combating unlawful repair restrictions.

There have also been recent attempts to enact laws guaranteeing consumers a right to repair the electronics they’ve bought.

Last year Sen. Jon Tester, a Democrat from Montana, introduced legislation to limit repair restrictions in the agricultural industry, and more than half of U.S. states are considering right-to-repair laws.

In December, New York Gov. Kathy Hochul signed a right-to-repair law that requires equipment manufacturers to provide repair information and parts for some consumer electronics, though some products such as medical devices and home appliances were carved out.

New York CNN  —  Unionized workers at Disney World have rejected a...
55 mins ago

Hong Kong/Tokyo CNN  —  Hideya Tokiyoshi started his career as an English...
1 hour ago