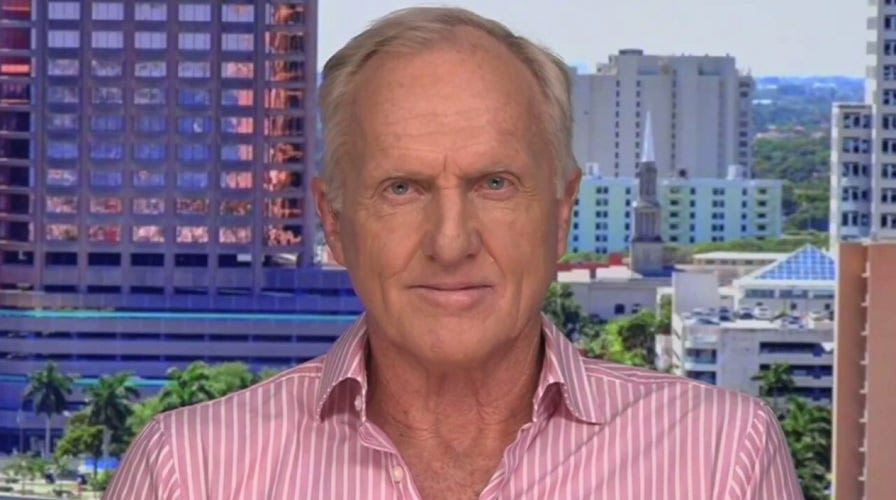 World Golf Hall of Famer and LIV Golf CEO Greg Norman discussed the franchise’s plans in the coming years after securing a TV deal with The CW.

Norman said the partnership is “critical” to what they’re doing and credited the fans, players and sponsors for the franchise’s success.

Norman said he prides himself over LIV Golf being a new platform that brings competition to the game that has “dearly needed it.”

He addressed the disputes between the PGA and LIV Golf.

Greg Norman, CEO and commissioner of LIV Golf, being introduced to the crowd during the team championship stroke-play round of the LIV Golf Invitational – Miami at Trump National Doral Miami on October 30, 2022 in Doral, Florida.
(Eric Espada/Getty Images)

“It’s an identification of the fact that there was virgin space left untouched, and it’s the first time in golf’s history that you’ve had private equity or money coming in to invest into this virgin space, to unlock this opportunity and create an ROI,” he said. “There’s nothing wrong with that.”

“We identified this ability, and what is that? It’s called the franchise model. All these great players we’ve had come over here have seen that ability for them to be able to be part of this franchise growth in the game of golf that’s never happened before.”

Tiger Woods looks on from the second tee during the second round of The Masters at Augusta National Golf Club on April 08, 2022 in Augusta, Georgia.
(Photo by Gregory Shamus/Getty Images)

Norman addressed recent comments made by Tiger Woods calling him out, saying if Norman steps aside, then both the PGA and LIV can talk.

“I think it’s sad for Tiger that unfortunately he made a comment that he doesn’t know the facts about because obviously I’m still here. Obviously, he doesn’t control what we do within LIV. So just making those comments, I think, is an indication that he might be a bit of a mouthpiece for the PGA Tour to try to get us to create turmoil created internally within LIV.”

LIV GOLF FINDS US BROADCAST HOME FOR 2023 SEASON AND BEYOND

LIV Golf is financed by the Public Investment Fund of Saudi Arabia and has come under mixed criticism in its early run over its involvement.

“PIF is our single-source investor,” Norman said. “There’s no question about that. No denying about that, but everything is up to LIV Golf investments. It’s up to me and my executive team to run and govern this thing going forward. So we’re very comfortable sitting back here with the business model we’ve created going forward.”

Norman defended the professional golf tour and said before he became CEO and commissioner of LIV, himself and other players were already building golf courses in Saudi Arabia.

“Now all of a sudden, we’re out here as professional golfers and because we’ve got a whole new platform, it’s like we’re the pariah,” he said. “It doesn’t make any sense.”

Norman added that there’s 23 PGA Tour sponsors who invest up to $40 billion into Saudi Arabia.

“Why don’t people come down on them?” Norman asked.

He said there’s a big question mark as to why they’re “attacking” LIV’s credibility.

PrevPreviousAl Gore has history of climate predictions, statements proven false
NextSelma, Alabama is in recovery after devastating storms earlier this monthNext
Back to Feed

CNN  —  The deep-pocketed network associated with billionaire Charles Koch is preparing...
52 mins ago

A version of this story first appeared in CNN Business’ Before the...
59 mins ago