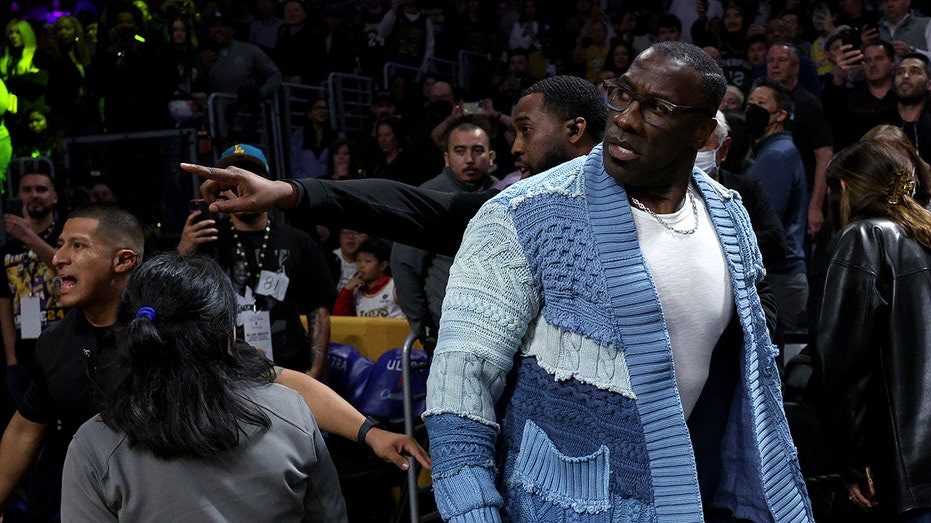 Shannon Sharpe and the Memphis Grizzlies’ Ja Morant and Dillon Brooks were involved in an apparent courtside incident at Friday evening’s game in Los Angeles.

Sharpe, the co-host of Fox Sports’ “Skip and Shannon: Undisputed,” was sitting courtside at the game but was briefly escorted away by security officials after he allegedly yelled at the players and an incident ensued.

According to Memphis Commercial Appeal, the altercation happened after the final possession of the first half. Morant was walking off the court toward the locker room before he paused and turned toward Sharpe.

Shannon Sharpe reacts after he is restrained by security from Ja Morant #12 of the Memphis Grizzlies after a verbal altercation after the first half against the Los Angeles Lakers at Crypto.com Arena on January 20, 2023, in Los Angeles, California.
(Harry How/Getty Images)

Video of the incident appears to show others quickly got involved, including Morant’s father Tee Morant, and a crowd of people formed in the area.

Security officials separated the group and the players left for the locker room before returning for the third quarter.

LEBRON JAMES PUSHES BACK ON CLAIM HIS PATIENCE IS ‘WANING,’ NOT FRUSTRATED WITH THE LAKERS

ESPN’s Dave McMenamin reported the incident may have initially started with Brooks, a small forward who was covering the Lakers’ LeBron James.

LOS ANGELES, CA – JANUARY 20: LeBron James #6 of the Los Angeles Lakers looks on during the game against the Memphis Grizzlies on January 20, 2023 at Crypto.Com Arena in Los Angeles, California.
(Andrew D. Bernstein/NBAE via Getty Images)

LOS ANGELES, CALIFORNIA – JANUARY 20: LeBron James #6 of the Los Angeles Lakers drives to the basket on Dillon Brooks #24 of the Memphis Grizzlies during the first half at Crypto.com Arena on January 20, 2023 in Los Angeles, California.
(Harry How/Getty Images)

Sharpe joked that Brooks was “too small” to guard him.

“They do all that talking and jockeying and I ain’t about all that jockeying,” Sharpe added.

Sharpe, an NFL Hall of Famer who is widely regarded as one of the greatest tight ends of all time, stands over 6’2″ and is bigger than most of the athletes on the court.

Other videos of the incident appear to confirm that Brooks yelled at Sharpe, who yelled back and pointed at the ground in front of him as if to gesture for him to come over.

Sharpe and Tee Morant were both allowed to return to their seat for the third quarter.

A surge by the Lakers in the fourth quarter and a key steal by the Lakers’ Dennis Schroder sealed the victory.

On the other side of the court, James had 23 points and the Lakers were led in scoring by Russell Westbrook, who had 29.

LOS ANGELES, CALIFORNIA – JANUARY 20: Shannon Sharpe is retrained by security from Ja Morant #12 of the Memphis Grizzlies after a verbal altercation following the end of the first half against the Los Angeles Lakers at Crypto.com Arena on January 20, 2023 in Los Angeles, California.
(Harry How/Getty Images)

LOS ANGELES, CALIFORNIA – JANUARY 20: Ja Morant #12 of the Memphis Grizzlies reacts as he walks to the bench during the first half against the Los Angeles Lakers at Crypto.com Arena on January 20, 2023 in Los Angeles, California.
(Harry How/Getty Images)