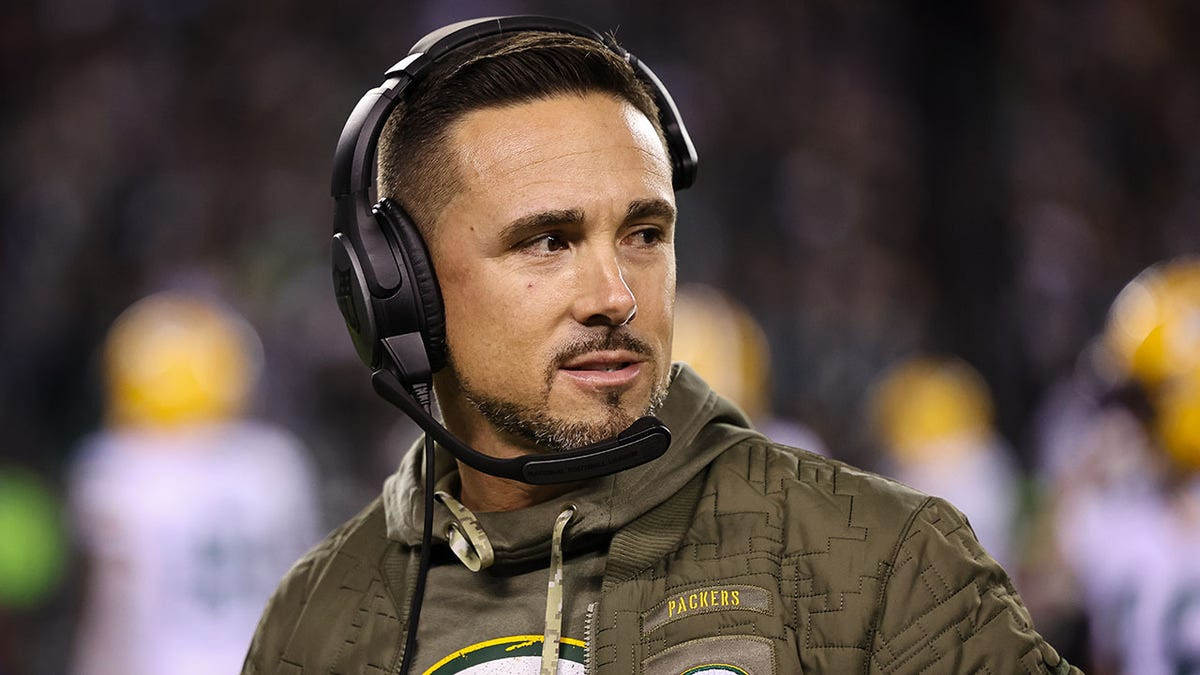 Packers head coach Matt LaFleur began his meeting with the media Wednesday with a long opening statement about Damar Hamlin.

LaFleur said Green Bay Packers players will have access to specialists after practices during the week if anyone needs assistance coping with the situation.

The coach said he was not watching the Monday night game but quickly learned what happened and started discussing the situation with other Packers coaches.

Head coach Matt LaFleur of the Green Bay Packers reacts to a play against the Philadelphia Eagles during the second half at Lincoln Financial Field Nov. 27, 2022, in Philadelphia.
(Scott Taetsch/Getty Images)

Hamlin’s situation is impacting teams across the league. While acknowledging injures are a part of football, LaFleur said he had “never witnessed anything quite like” what happened to Hamlin.

“What we all witnessed Monday night,” LaFleur said, “it was a sad deal. It was very traumatic and kind of puts what we do into perspective and how that supersedes anything in life, is just these players’ health and safety, and everybody’s health and safety. That was tough to watch. Obviously, our thoughts and prayers are with Damar Hamlin and his family and the Buffalo Bills.”

Hamlin has shown “signs of improvement” since he was rushed to the hospital after suffering a cardiac arrest during a game, the team said Wednesday.

“Damar remains in the ICU in critical condition with signs of improvement noted yesterday and overnight,” the team said in a post on Twitter.

“He is expected to remain under intensive care as his health care team continues to monitor and treat him.”

As the Packers met Wednesday morning to start their preparation for Sunday’s game against the Detroit Lions, a game the team must win to advance into the playoffs, LaFleur spoke with players about what happened to Hamlin.

The Packers have not missed the postseason during LaFleur’s tenure.

While the team is preparing to play, Hamlin remains on the minds of the Packers players, LaFleur said. He said it was a “very, very quiet” room, everyone still trying to process the severity of Hamlin’s medical condition.

LaFleur noted that he asked one of the Packers’ team trainers to address the players in Wednesday’s morning meeting. The fourth-year head coach then put things into perspective by sharing his priorities with players.

“I just tried to speak from my heart,” LaFleur said, “in terms of just how serious, and how tough it was to watch. You knew something was not right with the amount of time that it took to get him into an ambulance. And how often do you ever see an ambulance on the field? It definitely supersedes the importance of any kind of game. You’re talking about life.”

LaFleur said he sent Bills coach Sean McDermott a text message Monday and spoke with Bengals coach Zac Taylor. LaFleur worked on the same coaching staff with Taylor in 2017 when they both worked for the Rams.

The NFL has announced that Week 18 games will proceed as scheduled.

“I’ve had a couple coaches ask [about delaying games]. … It’s whatever the league decides,” LaFleur said. “I do think the league decided, obviously, the correct decision the other night to postpone or cancel [Monday Night Football].”

The coach acknowledged playing a game on Sunday will be a challenge.

“It’s not easy,” LaFleur said, “but you’ve got to do the best job you can. I think the thing about it is, I think every team is dealing with this right now. I mean, we all are. And it speaks to the brotherhood of this league, and how important these guys are to one another and the compassion that we have for one another.”

PrevPreviousSony at CES 2023: Everything Announced
NextTexas A&M basketball game delayed after Aggies forget uniforms at hotelNext
Back to Feed

1:46 PM ETSan Francisco 49ers running back Elijah Mitchell is inactive for...
26 mins ago

Editor’s Note: Lynda Lin Grigsby is a journalist and editor who has...
37 mins ago