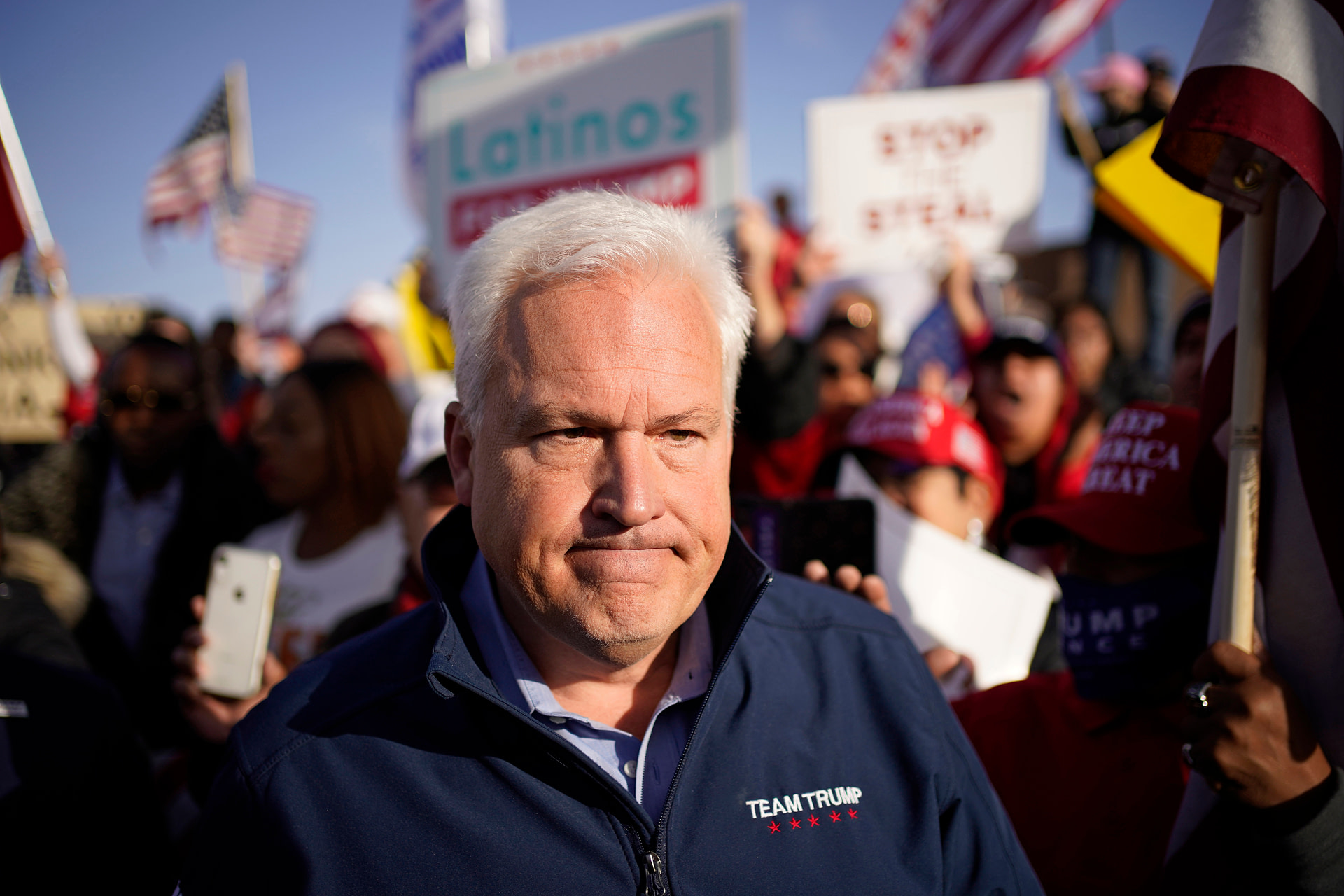 The male staffer said Republican political operative Matt Schlapp, without consent, “groped” and “fondled” his groin while the staffer was driving Schlapp back to his hotel Oct. 19. | John Locher/AP Photo

Matt Schlapp, a top Republican political operative, and his wife Mercedes Schlapp, a one-time Donald Trump aide, are being sued by a former Herschel Walker campaign staffer over allegations that he sexually assaulted him while on the campaign.

A lawyer for Schlapp on Tuesday said his clients deny the accusations and are considering “counter-lawsuit options.” The suit was filed in Virginia Circuit Court for the city of Alexandria.

The former Walker staffer, who filed the lawsuit anonymously, is seeking $9.4 million in damages from the Schlapps, saying not only did Matt Schlapp commit sexual battery, but he and his wife defamed him afterward.

Reached for comment, Schlapp’s attorney Charlie Spies called the complaint “false,” and said the “Schlapp family is suffering unbearable pain and stress” as a result. Schlapp also tweeted the statement from Spies.

“No family should ever go through this and the Schlapps and their legal team are assessing counter-lawsuit options,” said Spies, who is representing the couple.

The lawsuit follows claims earlier this month by the former Walker campaign staffer, who said Schlapp sexually assaulted him in Georgia in October while Schlapp was visiting the state to stump for the Republican Senate candidate.

The male staffer said Schlapp, without consent, “groped” and “fondled” his groin while the staffer was driving Schlapp back to his hotel Oct. 19. POLITICO confirmed the existence of the allegations, which were first reported on Jan. 6 by the Daily Beast.

The pair had gone out for drinks in Atlanta after Schlapp spent the day campaigning with Walker in Perry, Ga., Walker campaign officials told POLITICO.

In interviews with the alleged victim and four campaign staff members, POLITICO confirmed that a small number of campaign officials were made aware of the staffer’s claims about Schlapp within hours of the alleged assault occurring. They advised the staffer not to get back in a vehicle with Schlapp as he was scheduled to do for a campaign event in Macon, Ga. the next day. The staffer said he ultimately did not drive Schlapp again.

After consulting with higher-ups on the campaign the morning of the 20th, the alleged victim sent Schlapp a phone number for a private driver unaffiliated with the Walker campaign, according to two people aware of the events. Schlapp ultimately did not show up at the Macon rally, and Walker campaign staff who had previously coordinated with Schlapp’s team said they never heard back from them or an explanation on why he cut his trip short.

A senior Walker campaign official said that even if Schlapp had found his own transportation to the Macon rally, he would not have been permitted to speak after his alleged misbehavior the night before.

“If he had shown up to the event, we were not going to have him speak,” said the senior Walker official. “We were going to politely decline.”

Walker himself was eventually made aware of the situation, according to a person on the campaign with knowledge of the matter, and advised another staff member to put the alleged victim in touch with the campaign’s attorney to offer legal help. The Walker campaign also informed the staffer they would cover the cost of therapy. The staffer told POLITICO that he never heard directly from Walker on the matter.

After a few days of Walker officials following up with the staffer to make sure he felt the situation was being handled appropriately, the alleged assault was never mentioned again, the senior campaign official said.

In late-December, however, the staffer in question tweeted out a veiled reference to misbehavior by Schlapp and tagged his wife Mercedes Schlapp, before eventually deleting the post. The tweet was part of a series of posts about “Festivus” grievances, according to two people who saw it.

The staffer alleges in his suit that he was defamed by both the Schlapps and conservative operatives aligned with them. The lawsuit includes a screenshot, purportedly of a text Mercedes Schlapp sent to a neighborhood group chat Jan. 7, calling the accuser a “troubled individual.” The text message describes the man as someone who was “fired from multiple jobs,” including for “lying on his resume.” The staffer claims none of the allegations are true.

The lawsuit comes weeks before CPAC is set to host its largest annual conference March 1 through 4. The event is returning to Gaylord National Harbor in Maryland after a stint in Orlando during the Covid pandemic. CPAC has expanded its conference schedule, hosting other summits over the past year in Texas, Mexico, Hungary, Israel and Australia.

Two ACU board members released a statement of support for Schlapp after the Daily Beast story published on Jan. 6, and a previously scheduled CPAC donor gala that weekend went on at Donald Trump’s Mar-a-Lago resort as scheduled.