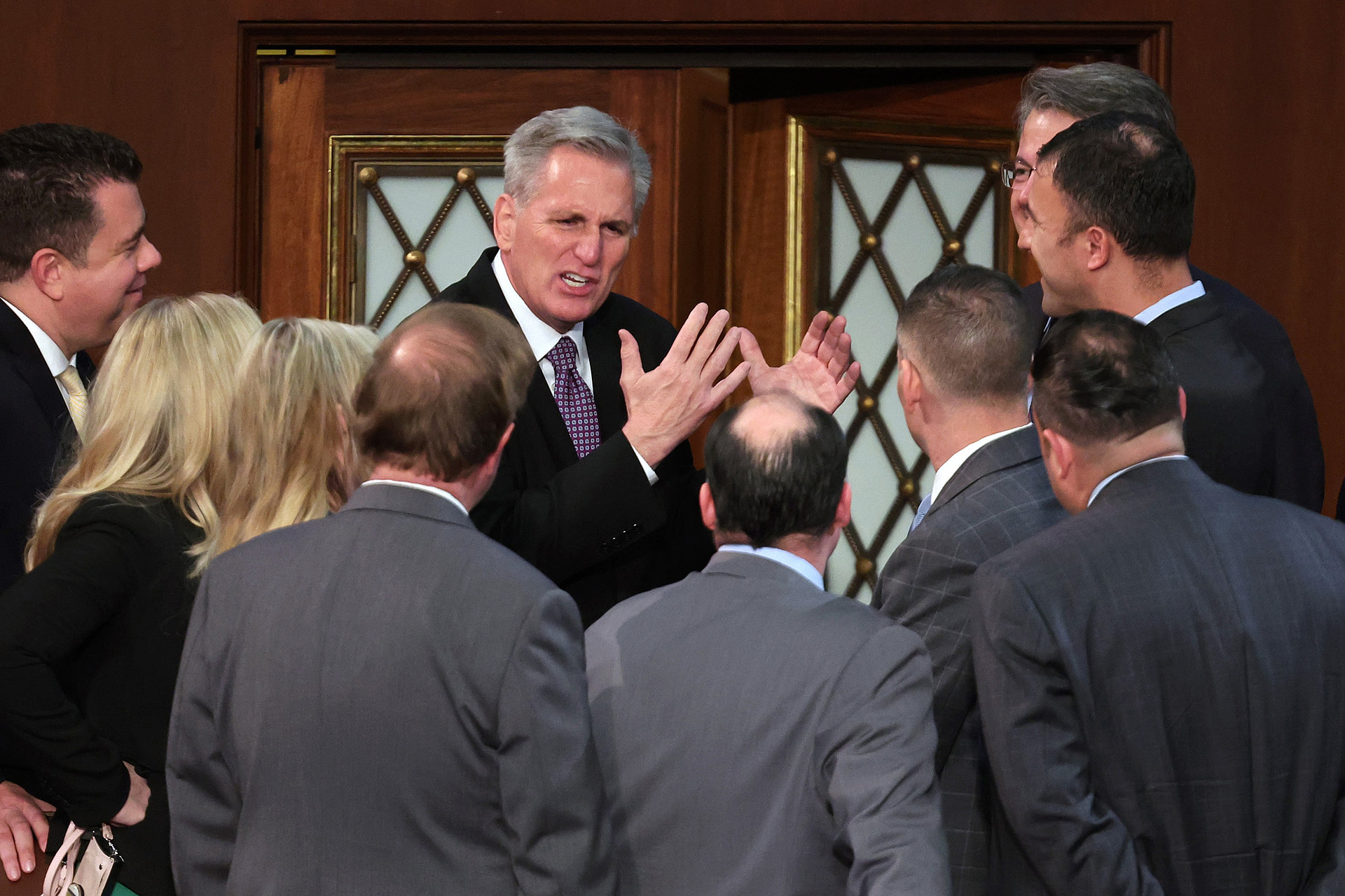 McCarthy’s bid for speaker of the House enters third day

There are no rules, technically, in the House.

That’s because without a speaker settled, the House hasn’t gone to the next items on the agenda, like passing the rules.

But House clerk Cheryl Johnson — who is in charge of the chamber until a speaker is selected — made clear that the clerk is responsible for preserving “order and decorum.”

Boebert reiterates opposition to McCarthy bid, says ‘there is a trust issue’

Rep. Lauren Boebert of Colorado, a key McCarthy opponent, said Thursday she still won’t support McCarthy’s speakership bid regardless of any concessions he may offer at this point.

“I don’t know what negotiations he could come up with that get the even more people now that were against him on board,” she said. She added, “It was never a personal issue. There is a trust issue for sure.”

Seventh round of speaker votes begins

The House has begun its seventh round of voting for speaker.

At noon, the House reconvened for a third day as the battle to elect a speaker continued.

The chamber should hear a prayer and say the pledge of allegiance before getting down to business.

Speaking with reporters, McCarthy said all of the members he talked to have been “very productive” in their discussions and ideas amid his efforts to salvage his bid for speakership.

“I think we’re having good discussions,” McCarthy said. “I think we’ll be able to find a solution. And the good thing about it is if we work this all out in a day, we’ll have the rest of Congress.”

As he walked back to the speaker’s office, McCarthy said everyone’s attitudes in meetings signal that “they want to find a solution and that’s positive.”

Rep. Ken Buck, R-Colo., an opponent of McCarthy’s speaker bid, said that “I think we probably vote into the weekend” regardless of whether the GOP factions make a deal on Thursday.

“Even if we had a solution today, it would take a period of time to get those votes to occur,” he told Fox News.

His comments came after House Democratic Whip Katherine Clark said Democrats were prepared to vote through the weekend.

Elon Musk backs McCarthy, then suggests he should run instead

Later Thursday morning, Musk appeared to be questioning that support, tweeting, “Subtle, but I am beginning to suspect opinions differ on this matter. … If not McCarthy, then seriously who?”

Minutes later he answered his own question:

This isn’t the first time Musk has voiced his support for Republicans. A day before the November midterm elections, Musk urged “independent-minded” Americans to elect a Republican Congress “given the Presidency is Democratic.” Musk has also previously voiced his support of Florida Gov. Ron DeSantis in 2024 if he runs for president.

GOP lawmaker reiterates opposition to McCarthy: ‘You don’t ever have to ask me again’

Rep. Bob Good, R-Va., who voted against McCarthy for all six ballots in the past two days, said his opposition to the GOP leader’s bid for speakership hasn’t wavered.

Hannity grills Boebert over GOP deadlock: ‘Is this a game show?’

Hannity and Boebert sparred as the Fox News host repeatedly pressed her about the faction of Republicans who refuse to back McCarthy’s bid for speaker, causing McCarthy to fall short of the simple majority required to win the race.

“Isn’t it time for you and your side to pack it in considering he [McCarthy] has over 200 [votes] and you have 20?” Hannity asked Boebert.

After Boebert expressed her dismay with the GOP leader, Hannity asked who she would want as speaker. Boebert replied that she’s willing to have conversation with the GOP conference to come up with a “consensus candidate.”

“Is this a game show? Like we’re gonna pick Jim Jordan one day, Trump the other day?” Hannity fired back.

House Democratic whip Rep. Katherine Clark, D-Mass, said her caucus will stick around and continue voting in the speaker race.

“We are here. We are in full attendance. And we are going to remain so,” Clark said.

She said Democrats will stay through the weekend if needed.

“Yes, and this is not a hard sell,” Clark said.

Here’s who is voting against McCarthy for speaker

The following 20 House Republicans have voted against McCarthy for speaker:

Rep. Warren Davidson, R-Ohio, said Thursday that McCarthy “may never make it to 218” votes in his quest to secure the speaker’s gavel.

“The tough part is I think the number that will never vote for Kevin McCarthy is more than, is more than four,” Davidson, a McCarthy ally, said in an interview on CNN. 218 is the number he currently needs to win over assuming the entire chamber votes.

Davidson suggested there are “a couple procedural paths” where McCarthy could become speaker if Republicans changed the threshold needed to win the election. Any lawmaker voting present or not voting also lowers the threshold below 218.

Asked about the possibility of McCarthy withdrawing from the race, Davidson said that’s for both the conference and McCarthy to decide, but noted that even if someone else were to run, there are people who only want to support McCarthy.

Davidson added that if McCarthy can’t secure the speakership, “We can go through the coping phases and everything else, and be mad about it, but at some point, we have to say, we have to have a speaker.”

Prior to entering politics, Rep.-elect Eli Crane, R-Ariz., was known as a former Navy SEAL and small business owner in Tucson. Crane on Wednesday voted against the motion to adjourn proceedings alongside three of McCarthy’s most prominent opponents; Reps. Matt Gaetz of Florida, Lauren Boebert of Colorado and Andy Biggs of Arizona.

Prior to his congressional run, Crane and his wife started a company called “Bottle Breacher” that produces hand-crafted .50-caliber bottle openers — a venture that billionaire Mark Cuban backed on the TV show “Shark Tank.”

On his campaign website, Crane describes his business as one that “employs and gives back to veterans nationwide.”

As McCarthy flails, Republicans refuse to cut a speaker deal with Democrats

WASHINGTON — Many House Republicans are furious with a band of far-right rebels who they say are holding the party hostage by repeatedly rejecting its nominee for speaker.

But there’s one thing they’re so far unwilling to do: work with a faction of Democrats to elect a centrist speaker to govern the narrow GOP majority and teach the rabble-rousers a lesson.

“That’s really off the table,” said Rep. Tom Cole, R-Okla., who has built a reputation as an institutionalist over the years. “I don’t think anybody voted to do that. I don’t think that works very well in any time. I think it’s particularly unsuited to these times. The polarization is too great.”

Cole said that for all the House GOP divisions, “there’s no question” that most members in the caucus are closer in policy and vision to the anti-McCarthy rebels than they are to centrist Democrats.

McCarthy on whether he has the votes today: ‘We’ll see’

McCarthy arrived on Capitol Hill Thursday, where the House is expected to attempt to elect a speaker for a third day in a row.

He told reporters that he believes progress is being made toward his election, adding that it is a “good sign” that Republicans are having conversations about a path forward.

Asked directly whether he has the votes, he said, “We’ll see.”

COVINGTON, Ky. — A key part of the White House plan to combat the new House GOP majority was on vivid display Wednesday: President Joe Biden talked about bridges and bipartisanship, while Republicans bickered among themselves.

As Biden celebrated an upgrade to an aging bridge linking Kentucky and Ohio, House Republicans deadlocked on the basic task of electing a speaker, foreshadowing what is likely to be two years of infighting.

There is little doubt that once Republicans figure out who will run the House, they plan to aim the chamber’s subpoena power straight at Biden.

Former House Speaker Nancy Pelosi said she finds the impasse among Republicans to elect a speaker “sad” and accused them of treating the process as a “frivolous matter.”

“You see this frivolity and this cavalier attitude of our responsibilities here in this Congress, that’s very sad,” Pelosi told reporters Wednesday night.

Pelosi also appeared to criticize Republicans who took “deals” to secure support for McCarthy in the speaker’s race. The McCarthy-aligned Congressional Leadership Fund and the conservative Club for Growth agreed to not pick sides in some competitive House GOP primary races in exchange for supporting McCarthy’s bid for speaker.

“The service should be taken seriously by those who serve instead of the frivolity of making deals on who’s going to be supported in elections in primaries, to have a reflection on what the responsibilities are in the Congress of the United States,” Pelosi said. “So it’s sad.”

During the six speaker votes this week, 20 conservatives have stuck together to deny GOP leader Kevin McCarthy of California the 218 votes needed to win the speaker’s gavel. Because Republicans won a paper-thin majority in November, nearly all of their 222 members will need to agree on a pick for speaker.

The chaotic process moves to a seventh ballot when the House reconvenes at noon on Thursday. But while McCarthy allies and foes remained deadlocked on Wednesday, there were some real signs of progress.

McCarthy offered a package of key concessions to his right-wing detractors, including reinstating a rule that a single House member could force a vote to oust the speaker in the middle of the Congress, according to Rep. Matt Gaetz, R-Fla., one of the leaders of the anti-McCarthy group. Earlier, McCarthy had agreed that a “motion to vacate” only could be made with support from at least five members.

“Anyone, anywhere, anytime,” Gaetz said about the power members will have to call for a vote of confidence in their speaker.

6:03 AM ETAssociated PressRory McIlroy overcame a final-round charge from Patrick Reed...
37 mins ago