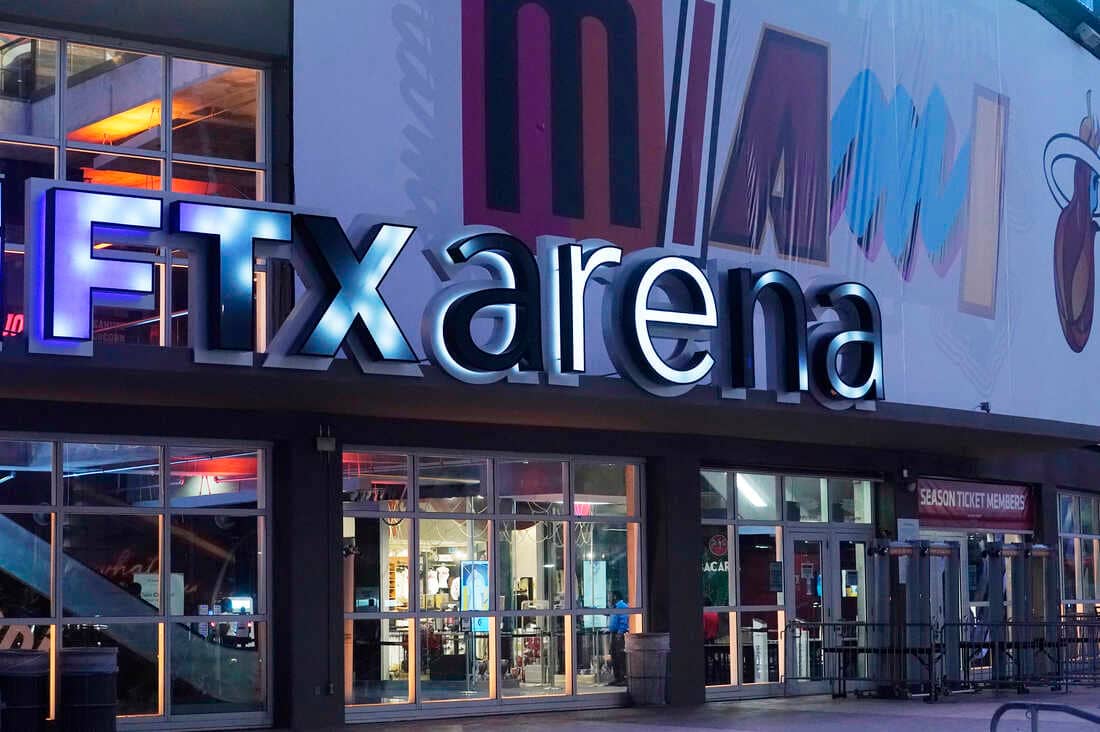 Miami-Dade County, stuck in a 19-year contract with FTX, seeks to rename its arena

Signage for the FTX Arena, where the Miami Heat basketball team plays, is seen illuminated on Saturday. The rapid collapse of cryptocurrency exchange FTX into bankruptcy has driven arena owner Miami-Dade County to seek a break in its naming rights deal with FTX.

In the wake of FTX’s collapse, Miami-Dade County wants the logo of the now-bankrupt cryptocurrency exchange company removed from its sports arena, where the NBA’s Miami Heat plays its home games.

The county, which owns the arena, asked a federal judge to immediately end a 19-year, $135 million naming rights deal with FTX, in a motion filed Tuesday with the Delaware court where the FTX bankruptcy proceedings are taking place. Miami-Dade argued that continuing the agreement with the failed company would cause “significant hardship” for the county and hurt efforts to find a new arena sponsor.

FTX founder Sam Bankman-Fried and his company are under investigation by the Department of Justice and the Securities and Exchange Commission for allegedly mishandling customers’ funds, much of which may have been funneled to Bankman-Fried’s hedge fund, Alameda Research.

After FTX filed for bankruptcy protection on Nov. 11, a judge issued a “stay” order that prevents any entity from acting against the company, which includes Miami-Dade’s desired termination of its sponsorship agreement.

A hearing for the case is set for Dec. 16. Unless the court grants the county relief from the stay order, Miami-Dade and the Heat will remain locked into the deal, which began last year.

FTX already has paid Miami-Dade almost $20 million, and has a $5.5 million payment due in January. Under the deal’s terms, a default on FTX’s part would require the company to pay the county for three years. That amounts to $17 million, which the county is seeking in damages, according to the county’s court filing.

Under Bankman-Fried, the Bahamas-based FTX quickly grew to become the third-largest cryptocurrency exchange, and recently was valued at some $30 billion. Good branding and press helped cast the 30-year-old entrepreneur as a promising leader who could bring legitimacy to a largely murky and unregulated industry.

The Miami Heat deal was just one of several sport sponsorship contracts FTX has signed, according to Decrypt. In 2021 alone, the crypto company had secured deals with Major League Baseball, the Golden State Warriors and the Washington Wizards of the NBA, the Washington Capitals of the NHL, and esports giant TSM.

In an interview with the cryptocurency news outlet that year, then CEO Bankman-Fried was asked how his two-year-old company had the long-term stability necessary to honor a nearly 20-year deal.

“Without going into the details, it’s been a pretty good year for us,” Bankman-Fried said. “To the point where, frankly, we don’t need to rely on the other 18 years to have the funds for this.”

A year and a half later, his company owes creditors more than $3 billion, while new leadership struggles to account for the disappearance of an unknown amount of customer money.

LeBron James queries why media asked him about Irving but not Jerry...
15 mins ago

Two months ago, the Securities and Exchange Commission (SEC) said it had...
19 mins ago

Money is tight these days. Holiday shopping, ballooning inflation, and a looming...
19 mins ago

Who could’ve guessed that after three pandemic years’ worth of bad PR,...
19 mins ago

Art of the QB leap: How Bills’ Josh Allen brings ‘backyard’ style to the NFL

Will Mac Jones return to his rookie form and overcome Patriots’ offensive struggles?

The Little Mermaid - Official Teaser TrailerCheck out the teaser trailer for...
48 mins ago
Load More