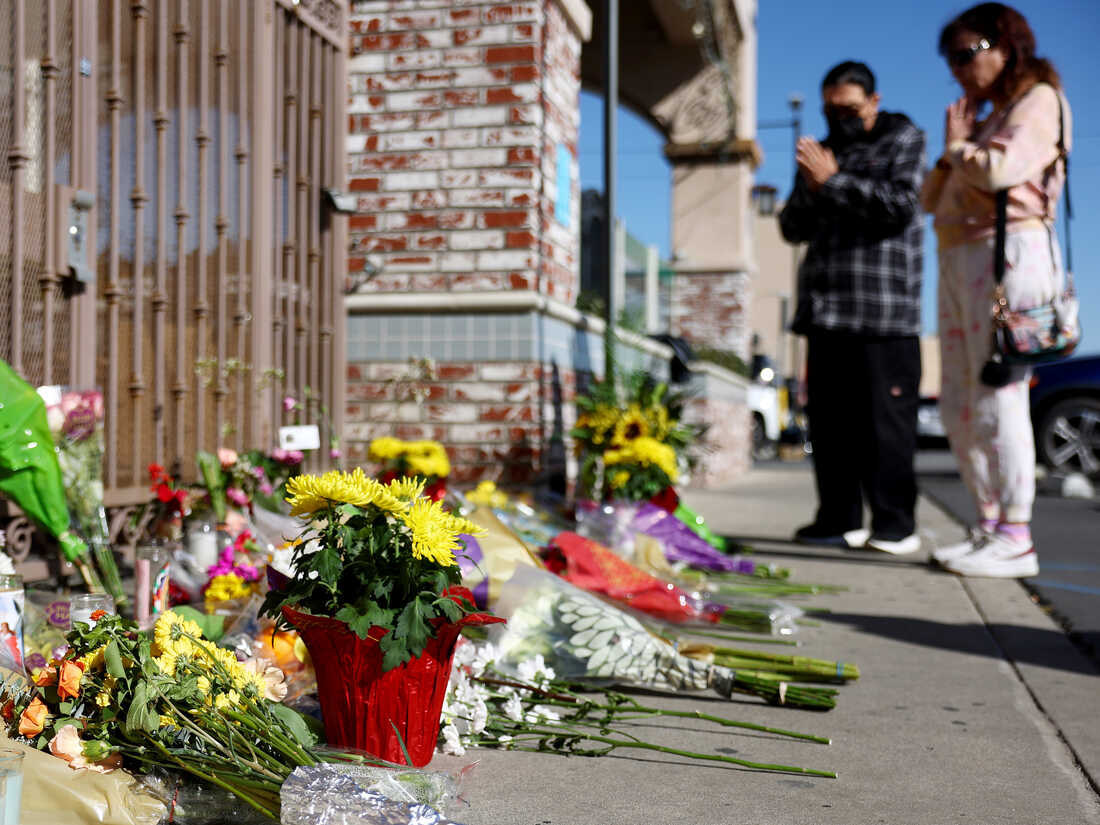 People stand at a makeshift memorial near the scene of the shooting.

As early evening settled in on Sunday, members of the Monterey Park, Calif., community came and went near the Star Ballroom Dance Studio, mourning and trying to process what had happened the night before.

Police tape, barricades and memorials of candles, flowers and handwritten notes offered a somber mood on what was meant to be a day of celebration for Lunar New Year.

The residents had come to mourn the mass shooting that left 11 people dead and many others injured.

“I would’ve still been outside enjoying the festivities, eating the good food, watching … the plays, the lights, the fireworks, whatever’s going on that they have scheduled because it was a three-day event,” Monterey Park resident Yang Zuo, 34, said of what should have been happening on Sunday.

Instead, Zuo was visiting the intersection near the dance studio with his daughter, the two of them holding hands, as he spoke with NPR about how the attack was impacting the community that is more than 65% Asian.

“Chinese community-wise, I don’t think we’ve ever encountered anything of this magnitude,” Zuo said.

When he first heard the news, he said he was “jaws to the floor” shocked.

“Because this is a very conservative community where everybody is, for the most part, over 40,” he said.

“Everybody just minds their own business. They’re just here to make an honest living. The dance studio is behind the Bank of America that everybody goes to, it’s also right next to the sheriff’s station. So this is a very safe neighborhood.”

Nearby, Adam Jona, a ballroom dance instructor at the studio, said he was still in denial about what had transpired less than 24 hours before.

Jona said he was supposed to be teaching at Star Ballroom on Saturday night, but last minute scheduling changes led to his class being canceled. He said that while the majority of patrons of the studio were elderly or retired Asian Americans who came for recreational classes, the shooting would impact the global ballroom dancing community.

“A lot of highly acclaimed famous dance coach[es] come here and give classes and private lessons and prepare before showcases,” Jona said. “So it does not only affect this community but a much larger dance community as well.”

Prior to the shooting, Jona described the atmosphere as one where people could come to take a load off and relax – and that was what was planned for the Lunar New Year’s Eve celebration.

“People come in, they have fun, they dress up, they draw raffles and they dance,” he said. “This is not a violent place.”

When Jona spoke to NPR, none of the names of the victims had been released yet, but he said he was bracing himself to hear that some of the people he knew were gone.

Makeshift vigils of candles, flowers and notes started to appear on Sunday after the shooting. One note read “My deepest [and] most heartfelt condolences to the lives lost [and] the lives who are forever changed by this night. May the AAPI community do what we do best — take care of one another.”

Min Zhao, a professor of sociology and Asian American Studies at UCLA, has taken classes at the dance studio before, but was not there on Saturday.

She doesn’t live in the community, but said she, like many others of Asian descent, visits frequently. The draw to the area began in the ’80s, she said.

“In the 1970s, Monterey Park was a multi-racial community already and then in the 1980s there has been very strong foreign investment in the community from Taiwan and other parts of Asia … and then that investment really kind of started to attract immigrants from Asia,” Zhao said.

“So as the suburban Chinese community, as it’s evolved, it becomes a magnet for the more resourceful middle-class Chinese immigrants.”

Throughout Monterey Park, the signs of businesses and community centers are written in Chinese characters. This is a reflection of the vibrant character of the city that attracts immigrants and Asian Americans alike, she said.

Zhou said she was devastated when she heard the news of the shooting.

She said she believes this attack cannot be separated from the rise in anti-Asian incidents across the U.S.

“Whatever the motive of the killer, one thing to me is for certain: that that person is definitely emboldened by the gun culture in this society and also by the violence against Asians in recent years, especially during the pandemic,” Zhou said.

As for how this attack will impact individuals in the Asian community, Zhou said that even walking down the street can be scary for her personally.

“That fear is kind of traumatizing,” she said.

CNN  —  A powerful blast inside a mosque in Pakistan’s northwestern city...
40 mins ago