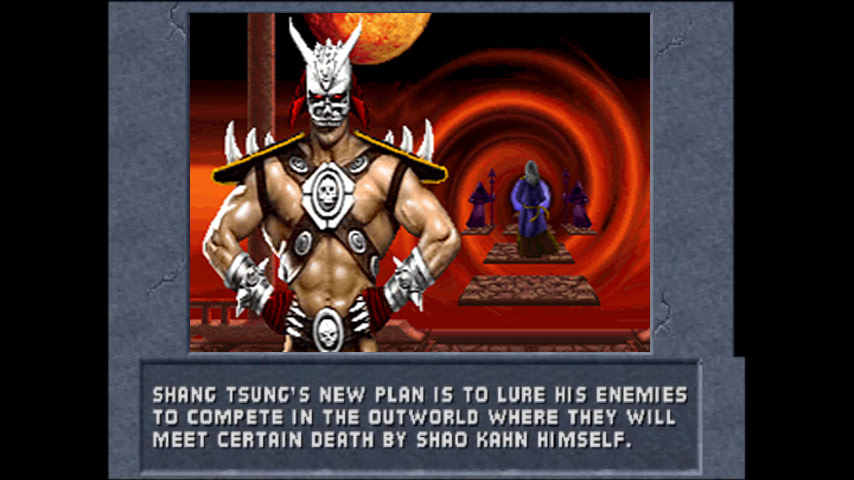 The source code for 1993’s Mortal Kombat 2 was published to GitHub over the holidays, purportedly revealing new artwork and an alternative storyline. Now Warner Bros.’ lawyers have gotten involved, filing a DMCA takedown demand that GitHub has honored. Naturally, all this has drawn renewed attention to the leak.

The code landed on GitHub in a Dec. 27 post, and with it, images of an alternate, attract-mode screen setting up the fighting game’s narrative. The story is still the same; Shang Tsung, pleading for his life, is granted a reprieve from Shao Khan. Shang Tsung then lures the Earthrealm kombatants to fight a tournament in the Outworld “where they will meet certain death by Shao Kahn himself.”

The alternate screen has the same picture of Shao Kahn flexing, but puts it over a background showing a dimensional portal with shadowy evil wizards in the background. It doesn’t really change Mortal Kombat 2’s story, but it does go a little further to sell the idea that nonplayable bosses Kintaro and Shao Kahn have a home field advantage in the Outworld.

On Friday, someone from Warner Bros. Discovery (the corporate parent of NetherRealm Studios and therefore Mortal Kombat’s copyright holder) sent a DMCA request to GitHub, which then wiped the archive of material from the site. It had been uploaded by the user historicalsource, who has posted source code for other old video games before.

The source code dump also revealed other animations, combos, and fighter moves that weren’t used in the arcade game. Mortal Kombat fans have already combed through everything, finding a scrapped Shao Kahn fatality (his fist comes through a portal above his victim’s head, crushing them flat) as well as Reptile performing a mid-air Acid Spit, among other things.

Polygon has reached out to WB Games and NetherRealm Studios for comment on the leaked code and cutting-room floor animations.

1:46 PM ETSan Francisco 49ers running back Elijah Mitchell is inactive for...
27 mins ago

Editor’s Note: Lynda Lin Grigsby is a journalist and editor who has...
37 mins ago