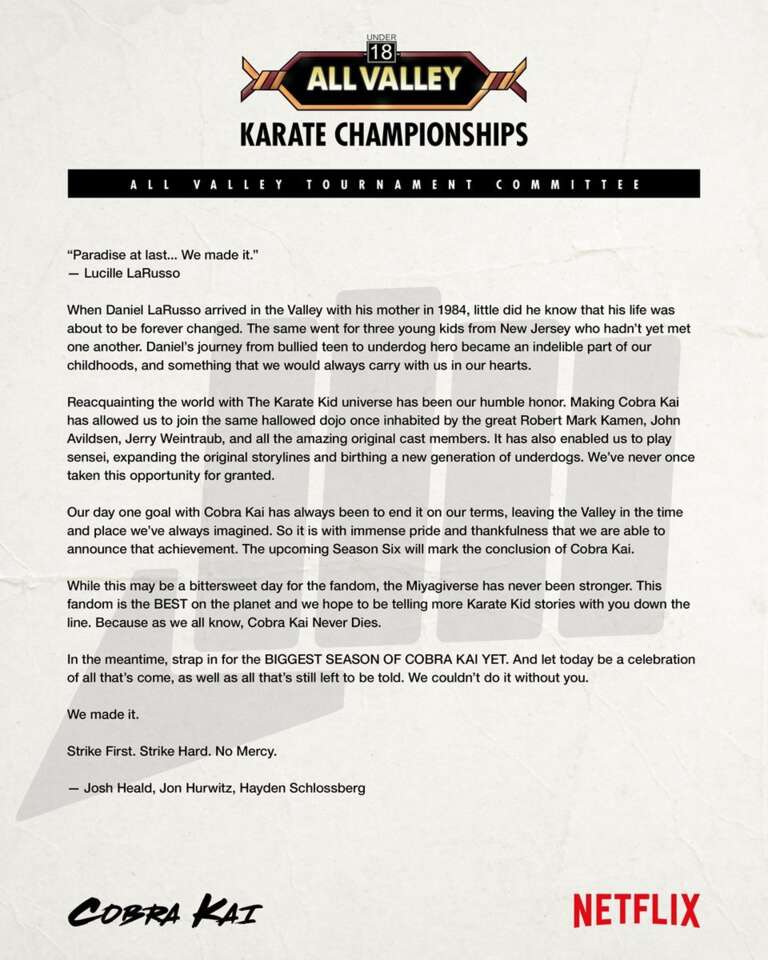 Netflix has announced that Cobra Kai, the Emmy-nominated hit comedy that continued the Karate Kid story for a new generation, will return for its sixth and final season. No air date was confirmed, but fans were promised it would arrive “soon.”

Co-creators Josh Heald, Jon Hurwitz, and Hayden Schlossberg wrote a letter–designed as All Valley Karate Championship stationary–thanking fans for going on this journey with them, and saying that they ended the series on their terms.

“Our day one goal with Cobra Kai has always been to end it on our own terms, leaving the Valley in the time and place we’ve always imagined,” it read. “Reacquainting the world with the Karate Kid universe has been our humble honor.”

You can read the full letter below:

Season 5 of the hit show premiered back in September, which finally gave fans Daniel Larusso once again using his trademark crane kick. While this creative team’s next movie is another spin-off, this time with the valet’s from Ferris Bueller’s Day Off, they also haven’t ruled out spin-offs of Cobra Kai down the line.

“Every option is on the table. It’s a special piece of entertainment that we’re connected to,” Hurwitz told Entertainment Weekly last year. “And now, even more than five years ago, we are dying to explore more.”

Cobra Kai has been nominated for eight Primetime Emmy Awards, including Best Comedy Series back in 2021.