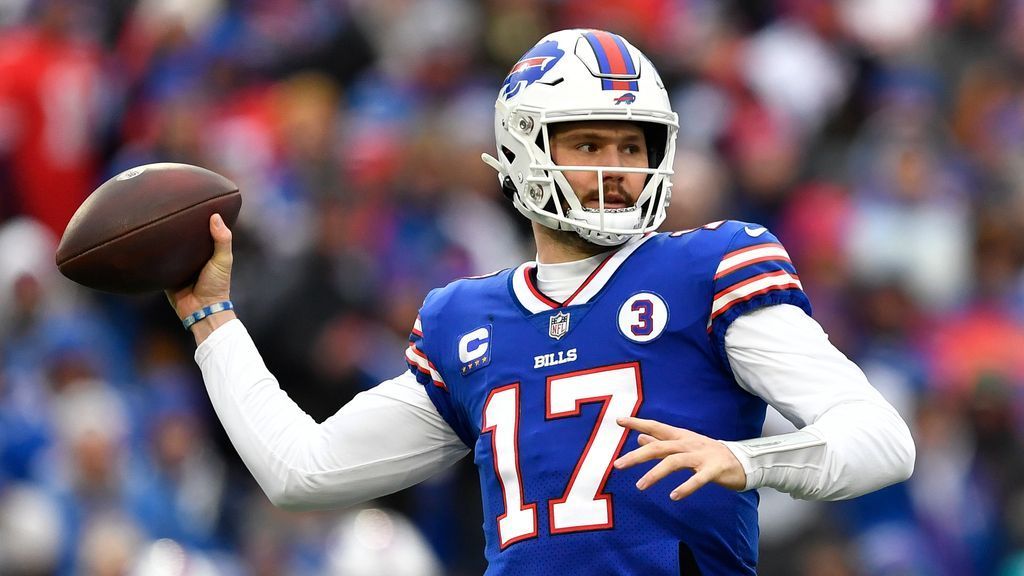 The NFL Wild Card weekend begins Saturday afternoon and with new overtime courtesy of last season’s wild AFC Championship game. The weekend’s slate features a number of new faces, including young quarterbacks, experienced receivers and tight ends and dynamic running backs taking the field. All of that put together means plenty of options for prop bets.

Need some last-minute advice while putting together your parlays for the weekend?

Our ESPN Fantasy Football experts have got you covered. They have studied and analyzed all of the players across the league from a fantasy perspective all season and are ready to offer insight on which player props are the most profitable for Saturday and Sunday’s games.

Which QBs do you think will go over or under their passing total this week?

Mike Clay: Josh Allen under 255.5 yards. My projection for Allen (220 yards) checks in well below this mark, which is hardly shocking considering he reached 256 yards in only seven (44%) of 16 games during the regular season. Allen hit 300 yards in the two regular-season meetings with Miami, but both were close games (including a loss), whereas Buffalo is a massive 13-point favorite this week with Skylar Thompson under center for Miami. Note that prior to 2022, Allen was 7-1 against Miami and reached 256 yards in only two of those games. Miami allowed 250.5 pass yards per game during the regular season, which was fifth-highest in the league, but still below this prop.

Field Yates: Daniel Jones could sail past his 238.5 prop, as he faces a Vikings defense that he carved up once already this season (334 passing yards on Christmas Eve) and that allowed the second-most passing yards in the league during the regular season. The Vikings searched for answers all season on defense and didn’t find them … at least not yet.

Matt Bowen: I like the under on Joe Burrow‘s passing totals at 272.5 given the Ravens coverage structure versus the Bengals quarterback during the two regular-season games. In those matchups — Week 5 and Week 18 — Baltimore lowered the blitz rate (under 11%) and played heavy split-safety coverage. Cover 2 and quarters. Get two-deep over the top to cap vertical routes down the field, with seven (and sometimes eight) dropping in coverage. The idea here is to limit the deep ball throws and in-breakers, staples of the Bengals route tree, while forcing Burrow to take the unders. As a result, Burrow failed to top 220 yards passing in both games played this season. And I would expect the same coverage script again from the Baltimore defense on Sunday night.

Tristan H. Cockcroft: Josh Allen’s prop just pops off the page, doesn’t it? He threw for more than 300 yards in both of his meetings with the Dolphins this season, and let’s not forget that the Dolphins allowed the sixth-most passing yards during the regular season. He’s by far my favorite from this list, though I think Daniel Jones and Brock Purdy are pretty solid bets to exceed those totals, too.

Eric Karabell: Josh Allen threw for 400 yards in the first Miami meeting and 304 yards in the second one, and the only reason he may not get near these totals again is because this game may be so lopsided in his favor after 30 minutes (no Tua Tagovailoa for Miami, remember). Actually, even then, I think Allen will keep throwing. It seems like a low line for Allen, who threw 103 passes in the Miami games. I see the Dolphins piling on the points, and generally that means Allen is throwing.

Eric Moody: Tom Brady has a better chance of passing for 272.5 yards against the Cowboys than most people think. He has surpassed 272.5 passing yards in 77.8% of his games this season. Brady leads the league with 490 completions and 733 attempts. and is 7-0 against the Cowboys in regular season games, averaging 277.8 passing yards per game. With rainy weather and winds in the forecast in San Fransisco, I’m gravitating toward Brock Purdy going under 224.5 passing yards. The Seahawks scored just 20 points against the 49ers during the regular season and San Francisco will likely rely heavily on the running game to get an early lead and dominate the time of possession.

Watch the Dallas Cowboys take on the Tampa Bay Buccaneers only on “Monday Night Football” to cap off wild-card weekend. Only on ESPN/ABC/ESPN+

Which running back do you think will go over or under their rushing total this week?

Clay: Ezekiel Elliott over 48.5 yards. Elliott’s rushing yardage prop is egregiously low for a player that hit 49 yards in 80% (12 of 15) of his games, while averaging 58.4 yards per game during the regular season. His projection is 62.1 yards on 15 carries, though he only required 10 carries to reach 52 yards against Tampa Bay when these teams met in Week 1. The Bucs’ run defense has been elite in past years, but not so much in 2022, having allowed 14 RBs to hit 49 yards in a game. Backs averaged 4.4 yards per carry against Tampa Bay, which is actually the 14th-highest in the league.

Yates: Kenneth Walker III under 59.5 rushing yards seems like close to the best bet here, as the 49ers didn’t concede a 60-plus yard rusher in a game until Week 17 of the regular season. While current weather conditions could lead to more running of the ball (the forecast calls for a wet Sunday in San Francisco), the Niners defense is a brick wall.

Bowen: Travis Etienne Jr. over 75.5 rushing yards meshes with the Jags offensive game plan versus a leaky Chargers’ run defense. He needs to see run game volume in this one. And I would focus on Etienne’s rushing attempts with 11 personnel in the game (1RB, 1TE, 3WR). During the regular season, Etienne totaled 615 yards rushing — on 99 carries — with three wide receivers on the field. That’s 6.2 yards per carry — against an L.A. defense allowing 5.4 yards per carry versus 11 personnel. Reduce the formation and attack the edges. Run downhill on zone schemes. Or, pull the guard to carve out some daylight here. And Etienne has some home run ability, too. Get one explosive play here and that over will hit.

Cockcroft: I think both of the running backs from the Seahawks-49ers game have good odds of exceeding their totals, though Christian McCaffrey stands out because of the strength of the matchup. On one hand, the 49ers at times kept his workload in check during the regular season, which perhaps casts doubt upon how many carries he might get in this game, but I also think that was by design to keep him fresh for these critical games. It’s probably the best matchup any running back has this weekend.

Karabell: When in doubt, go with the best, and this week that means Christian McCaffrey. First, only five NFL defenses permitted more rushing yards per game than the Seahawks. Second, McCaffrey tore up the Seahawks for 108 rushing yards in Week 15. Try not to overthink things. Sure, the 49ers can throw with their rookie QB, but why risk things if you have McCaffrey?

Moody: Saquon Barkley might end up with the most rushing yards after wild card weekend. He is the Giants’ top offensive playmaker and should see at least 20 rushing attempts. The Vikings’ offense is loaded with talent so New York will have to keep them off the field to win this game. The Giants will look to run the ball efficiently and convert third downs as they have all season. Expect Barkley to be busy against the Vikings on Sunday.

Which WR/TE do you think will go over or under their receiving total this week?

Mike Clay: Ja’Marr Chase over 77.5 yards. Chase’s projection checks in at 86.7 yards after he reached 78 yards in eight of 12 games (67%) during the regular season. Chase’ volume has been nothing short of elite, as he’s averaged 11.2 targets per game, including at least 11 targets in four straight outings. Chase has caught at least seven passes in eight straight games, six of which resulted in 78-plus yards. He’s been targeted at least 10 times in all four career games against Baltimore, three of which resulted in 86-plus yards. The Ravens have been up and down against WRs this season, but they’ve allowed the fifth-most yards to the position and nine receivers have hit 78 yards against them.

Yates: With Mike Williams out, the door is open for Austin Ekeler to go over 36.5 receiving yards against the Jaguars. Ekeler surpassed 36.5 yards in nine of 17 games this season, seeing particularly strong volume when either Williams or Keenan Allen was unavailable.

Bowen: I’m taking T.J. Hockenson over 47.5 receiving yards after watching the Week 16 head-to-head tape versus the Giants. In that game, Hockenson caught 13 of 16 targets for 109 yards with two scores. But this is more about how he is deployed as a pressure read for quarterback Kirk Cousins versus a Giants defense that registered a blitz rate of 43.1% in the regular-season matchup. Hockenson caught 6 of 7 targets versus the blitz, logging 47 yards and a touchdown. Quick throws to the flat, inside stick routes, more. I’m betting on the former Hawkeye here to make himself available to Cousins as an underneath target when the Giants turn up the heat.

Cockcroft: Both of the Buccaneers’ wide receivers, Chris Godwin and Mike Evans, are attractive picks at those projected totals, but Evans is the one who stands out as more of a perimeter receiver facing a defense that struggled to contain those on the outside in the regular season’s final weeks. The Bucs should be competitive in what should be a pass-oriented game, and I’d expect Tom Brady will need to throw 40 times.

Karabell: I’ll stick with the Bills and go all-in here with their top wide receivers, too. Stefon Diggs didn’t top this line in either matchup this season, but there’s more on the line this time and Buffalo’s game plan versus Miami was definitely to throw. Dawson Knox had 98 receiving yards against the Dolphins in Week 15. I like him on the over, but this is the playoffs, and I stick with the top options. Diggs and Gabe Davis for the over.

Is there any other prop on the board you are looking at playing?

Bowen: I’d look at Christian McCaffrey over 114.5 total yards. McCaffrey had 138 total yards — on 32 touches against the Seahawks defense in Week 15. While his total volume could decline with Deebo Samuel back in the mix, McCaffrey’s versatility in the 49ers passing game makes me feel much more comfortable taking this bet. Expect screens, backfield releases, flexed alignments. Kyle Shanahan will scheme targets for McCaffrey to get loose in space in catch and run situations.

Moody: Dak Prescott over 0.5 interceptions. Prescott has averaged 1.25 interceptions per game this season and his passer rating drops significantly under pressure. The Buccaneers don’t blitz much, but they do use unconventional four-man rushes.