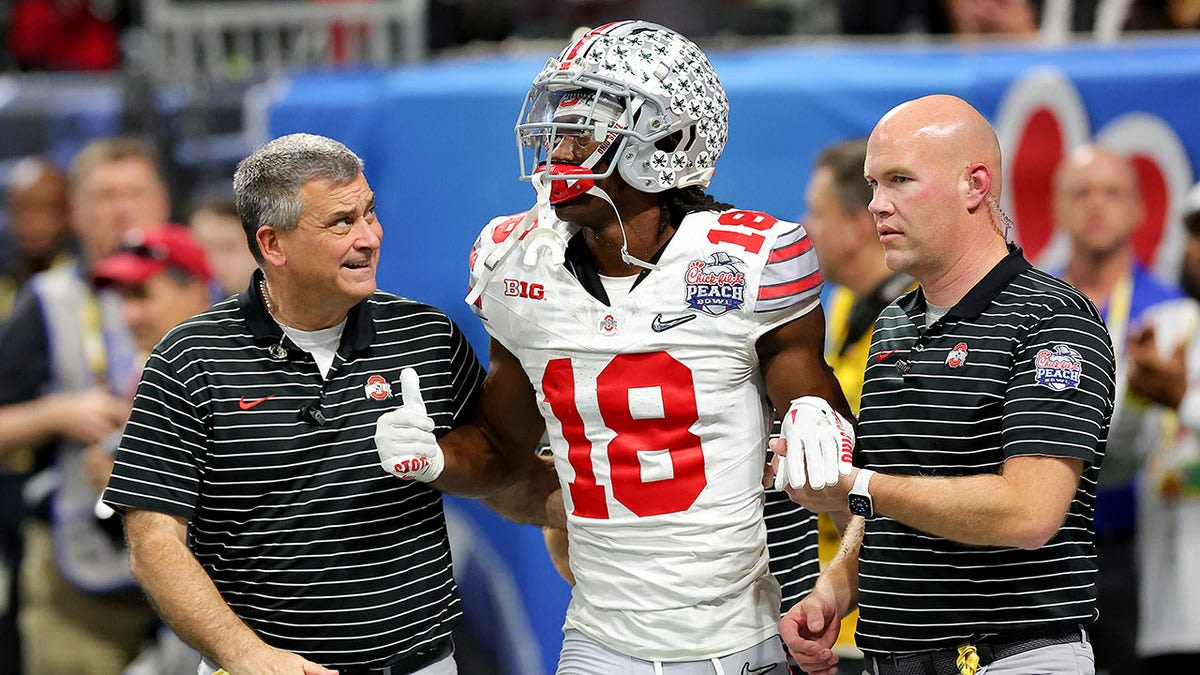 Georgia dominated TCU for a 65-7 victory, which marked the largest margin of victory ever in a bowl game.

Last season, the Bulldogs beat the Alabama Crimson Tide in the national championship game to capture the school’s first title in over 40 years.

Alabama head coach Nick Saban was inside SoFi Stadium for Monday’s championship game and offered his opinion about a controversial hit on a star wide receiver during Georgia’s semifinal matchup.

Marvin Harrison Jr. (18) of the Ohio State Buckeyes is helped off the field after being injured during the third quarter against the Georgia Bulldogs in the Chick-fil-A Peach Bowl at Mercedes-Benz Stadium Dec. 31, 2022, in Atlanta.
(Kevin C. Cox/Getty Images)

“Well, I think the play on Marvin Harrison Jr. was targeting as well,” Saban said on “College Gameday.”

Late in the third quarter of the Peach Bowl, Bulldogs defensive back Javon Bullard delivered a hard hit on Harrison. The officials initially flagged Bullard for targeting, but a referee in the booth later reversed the call.

The hit knocked Harrison out of the game, and he was unable to return due to a concussion. Ohio State was up 35-24 when he was injured and lost the game 42-41.

TCU ACKNOWLEDGES STILL ANOTHER STEP TO BE TAKEN AFTER BEATDOWN AGAINST GEORGIA: ‘WE’LL LEARN FROM IT’

Ohio State coach Ryan Day said after the game that the loss of Harrison had an impact on the game’s outcome.

“To say that losing Marvin had an impact on the game, it absolutely did,” Day said, via ESPN.

Saban made a guest appearance on ESPN’s telecast during the pregame and halftime of the national championship game. During the broadcast, Saban said he believed the targeting call should have stood.

Marvin Harrison Jr. (18) of the Ohio State Buckeyes attempts to catch a pass during the third quarter against the Georgia Bulldogs in the Chick-fil-A Peach Bowl at Mercedes-Benz Stadium Dec. 31, 2022, in Atlanta.
(Carmen Mandato/Getty Images)

Ohio State would have been granted an automatic first down if the call was not overturned. Advancing the ball and getting a fresh set of downs did not guarantee that the Buckeyes would have scored a touchdown on the drive, but the call seemed to help swing momentum.

After the penalty flag was picked up, Ohio State settled for a field goal and increased its lead to 38-24.

Social media went into a frenzy during the halftime show when ESPN college football analyst and former Bulldogs linebacker David Pollack declared Georgia football was the top program in the nation.

“We love the Cinderella story, and we love when this comes about, but this isn’t really the Cinderella ending. Georgia, obviously, we’ve seen from the past couple seasons now, really, they’ve taken hold of college football.” Pollack said when Georgia led TCU 38-7 at the end of two quarters.

A stone-faced Saban, who was sitting right next to Pollack, stared at the former Georgia Bulldog a prolonged period of time.

“Unbelievable job. This is a young football team,” Pollack added.

Saban led the Crimson Tide to a 10-2 record this season, which earned Alabama the No. 5 spot in the year’s final College Football Playoff rankings. Alabama dominated the Big 12 champions, Kansas State, 45-20 in the Sugar Bowl.

CNN  —  Paris Saint-Germain has struggled in recent games, relatively speaking, but...
46 mins ago