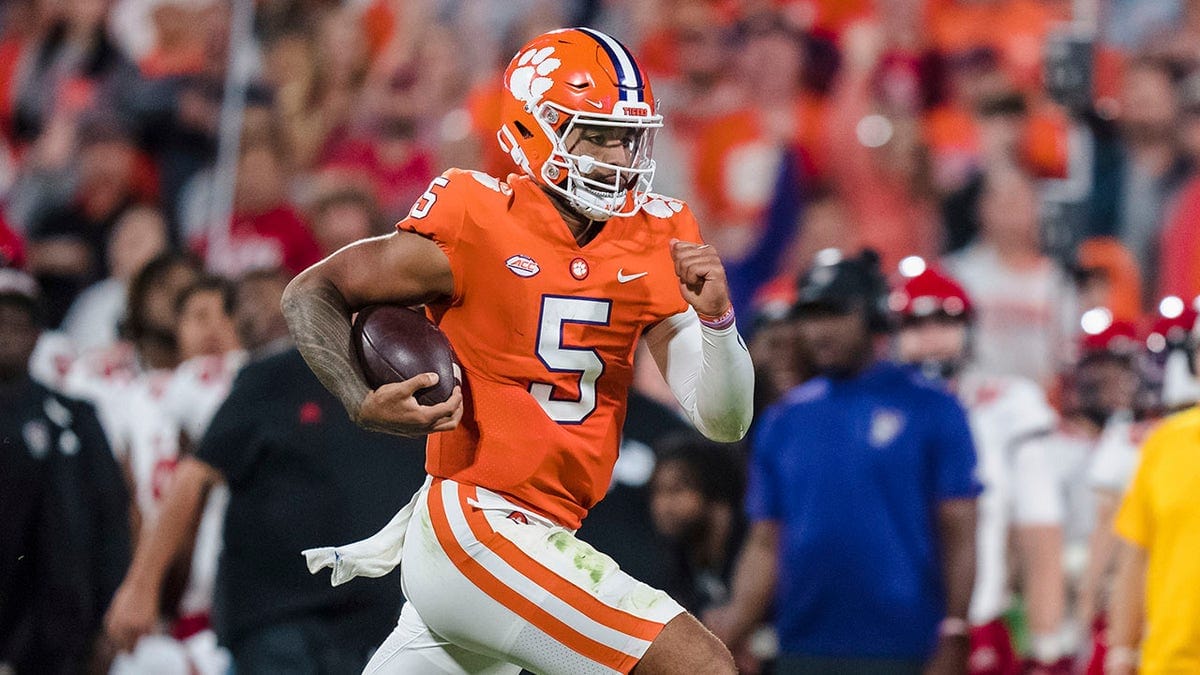 CLEMSON, S.C. (AP) — DJ Uiagalelei ran for two touchdowns and threw for a third as No. 5 Clemson won its 11th consecutive game, its 37th straight at home and took control of the ACC Atlantic with a 30-20 victory over No. 10 North Carolina State on Saturday night.

The Tigers (3-0 ACC) started 5-0 for the seventh time in eight years and completed a two-week stretch where they bested the two teams thought most likely to block their return atop the division — first with a 51-45 OT win at No. 22 Wake Forest last Saturday and now the Wolfpack (4-1, 0-1) at Death Valley.

Uiagalelei ignited the Tigers right before and right after the half to build a lead that N.C. State, playing in its first-ever Top 10 matchup, couldn’t overcome.

Uiagalelei finished a 75-yard scoring drive by stretching the ball over the goal for a 1-yard score to move in front 13-10. Then, after Clemson’s defense forced a three-and-out with a pair of sacks on ‘Pack quarterback Devin Leary, Uiagalelei cashed in again with 7-yard touchdown throw to tight end Jake Briningstool.

Clemson quarterback DJ Uiagalelei (5) runs with the ball in the second half of an NCAA college football game against North Carolina State, Saturday, Oct. 1, 2022, in Clemson, S.C.
(AP Photo/Jacob Kupferman)

Clemson’s defense did the rest, holding the potent Wolfpack to just a field goal over the first 29 minutes of the second half in building a 17-point lead. The Tigers also picked off Leary and recovered a fumble when N.C. State went for it on 4th-and-13 down 10 with less than nine minutes left.

Clemson, which hasn’t lost at home since November 2016, matched Florida State’s ACC mark of 37 straight at home set from 1992-2001. The Tigers’ 11 in a row since last season in the longest current streak in the FBS.

Clemson also holds tiebreakers in the division over the Demon Deacons and Wolfpack.

Clemson and N.C. State came in with two of the highest-scoring offenses in the ACC and figured to trade trips to the end zone throughout. Instead, it was a struggled for each to find points in the first 30 minutes.

NO. 9 OKLAHOMA STATE GETS REVENGE ON NO. 16 BAYLOR IN BIG 12 TITLE REMATCH

The Wolfpack and preseason ACC player of the year Devin Leary broke through first with a 2-yard TD to tight end Cedd Seabrough late in the second quarter to go up 10-6 with less than two minutes left in the half.

That’s when Uiagalelei got things going with his scoring run to send the Tigers into the break ahead 13-10 instead of trailing. He sealed the win with a 9-yard touchdown run with 3:04 left. Uiagalelei completed 21 of 30 passes for 209 yards and ran for a team-high 73 yards.

Leary was 28 of 47 passing for 245 yards and an interception. He also rushed for a 4-yard TD with less than a minute left as the Wolfpack finished with their fewest points this season.

North Carolina State: The Wolfpack have plenty of talented players, but got rattled in that time right around halftime to allow Clemson’s two touchdowns. NC State now has to cross its fingers that the Tigers lose twice in their final five ACC games.

Clemson: The Tigers have had to prove their offense was legit all season and, while they didn’t pile up the points like in their first four games, they made enough plays to show themselves once again as the ACC’s top contender.

Starting defensive tackle Bryan Bresee missed his second game of the past three after dealing with a non-football medical condition that Clemson said involved blood tests and observation. Bresee and his family are still mourning 15-year-old Ella Bresee, who died of brain cancer last month and has been an inspiration to her brother’s team with the phrase, “Ella Strong.” Bryan Bresee got good news about the tests late this week and his condition won’t have a long-term impact, Clemson said.

Clemson running back Will Shipley (1) runs with the ball in the first half of an NCAA college football game against North Carolina State, Saturday, Oct. 1, 2022, in Clemson, S.C.
(AP Photo/Jacob Kupferman)

North Carolina plays No. 23 Florida State at home next Saturday.

The families and their advocates of U.S. citizens wrongfully detained in China...
47 mins ago

LOS ANGELES — Hundreds of thousands of undergraduate students at the University...
47 mins ago

TALLAHASSEE, Fla. -- A statewide grand jury empaneled at the request of...
50 mins ago

DC fans have had a bumpy week with the revelation that Wonder...
52 mins ago

The former Minneapolis police officer who kneeled on George Floyd’s back while another officer...
55 mins ago
Load More