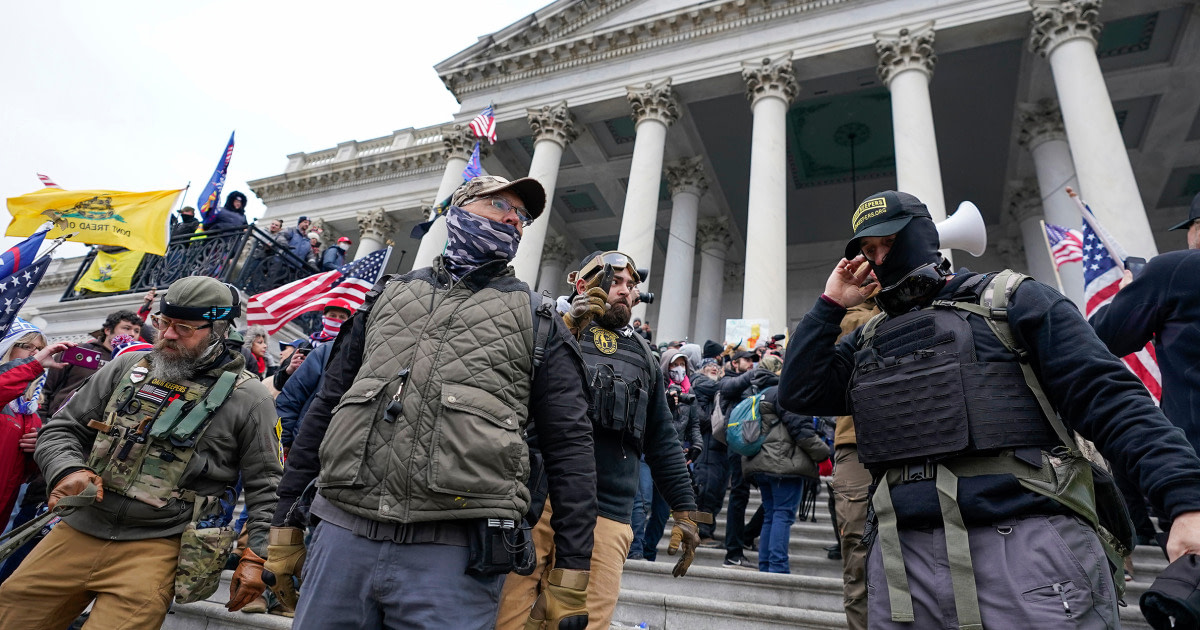 A jury on Monday convicted four members of the extremist group the Oath Keepers of seditious conspiracy.

The jury started deliberations Thursday morning after a trial that spanned five weeks.

“Attacking the Capitol was a means to an end,” Assistant U.S. Attorney Louis Manzo told jurors during closing arguments Wednesday. He said the group took advantage of the riot and seized the opportunity to fulfill their goal of preventing Congress from counting the electoral votes and confirming Joe Biden as the winner of the 2020 presidential election.

“January 6 was just a battle. The full conspiracy was to stop the transfer of power,” Manzo said.

Prosecutors said Vallejo was staged at a Virginia hotel with a stockpile of rifles — which they have called a “Quick Reaction Force” — while Hackett, Moerschel and Minuta led groups to breach the Capitol building.

The trial, which started Dec. 12, included testimony from Brian Ulrich, a member of the Oath Keepers’ Georgia chapter who had pleaded guilty to seditious conspiracy and obstruction of an official proceeding. Ulrich testified that he took part in the storming of the Capitol because he wanted to stop the counting of the Electoral College votes.

“There’s no other reason to go in that building at that point,” Ulrich said.

Manzo also pointed jurors to clips from a selfie-style video of Minuta, filmed in what appears to be his car. In the video, a furious Minuta yells about fake ballots, complains that Congress hasn’t done enough about the problem and said children would become “slaves” if people don’t act.

“Millions will die,” Minuta said in another clip from the same video. “So what. So what…. I’m not afraid and I’m ready to f—ing go.”

The four defendants were charged as part of the same seditious conspiracy case involving Oath Keepers founder Stewart Rhodes that went to trial in October. The case was split into two trials due to the number of defendants.

Rhodes and Kelly Meggs, the leader of the group’s Florida chapter, were convicted of seditious conspiracy in November. Three additional defendants from the first trial — Jessica Watkins, Kenneth Harrelson and Thomas Caldwell — were acquitted of seditious conspiracy but convicted on other felony charges, including obstruction of a federal proceeding. All five are awaiting sentencing.

Lawyers for the defendants in the second trial said their clients had been overcharged and did not conspire to overthrow the government.

Defense attorney Angela Halim argued that Hackett, whom she said had no military or law enforcement experience, was lumped into a “narrative” crafted by prosecutors about the Oath Keepers.

Scott Weinberg, an attorney for Moerschel, took a similar tack. “This is not some highly organized group,” he said.

Vallejo, an Arizona resident, veteran and former Oath Keeper, came to Washington for Jan. 6 with “nothing but a servant’s heart,” his lawyer told jurors.

“Ed brought 30 days of food with him, not just for himself but for a group, and he believed he was going to a campground where he would set up a food kitchen and cook for protesters,” defense attorney Matthew Peed said in opening statements. “And it would be kind of a, kind of like a festival.”

He also stressed that Vallejo hadn’t met his co-defendants until the day of jury selection in the trial.

“There was literally zero coordination between these people,” Peed said.

PrevPreviousFuneral for Palestinian boy killed during Israeli raid highlights growing tensions
NextDeal Alert: The 48″ LG UltraGear 48GP900 4K OLED Gaming Monitor Is Down to $897Next
Back to Feed