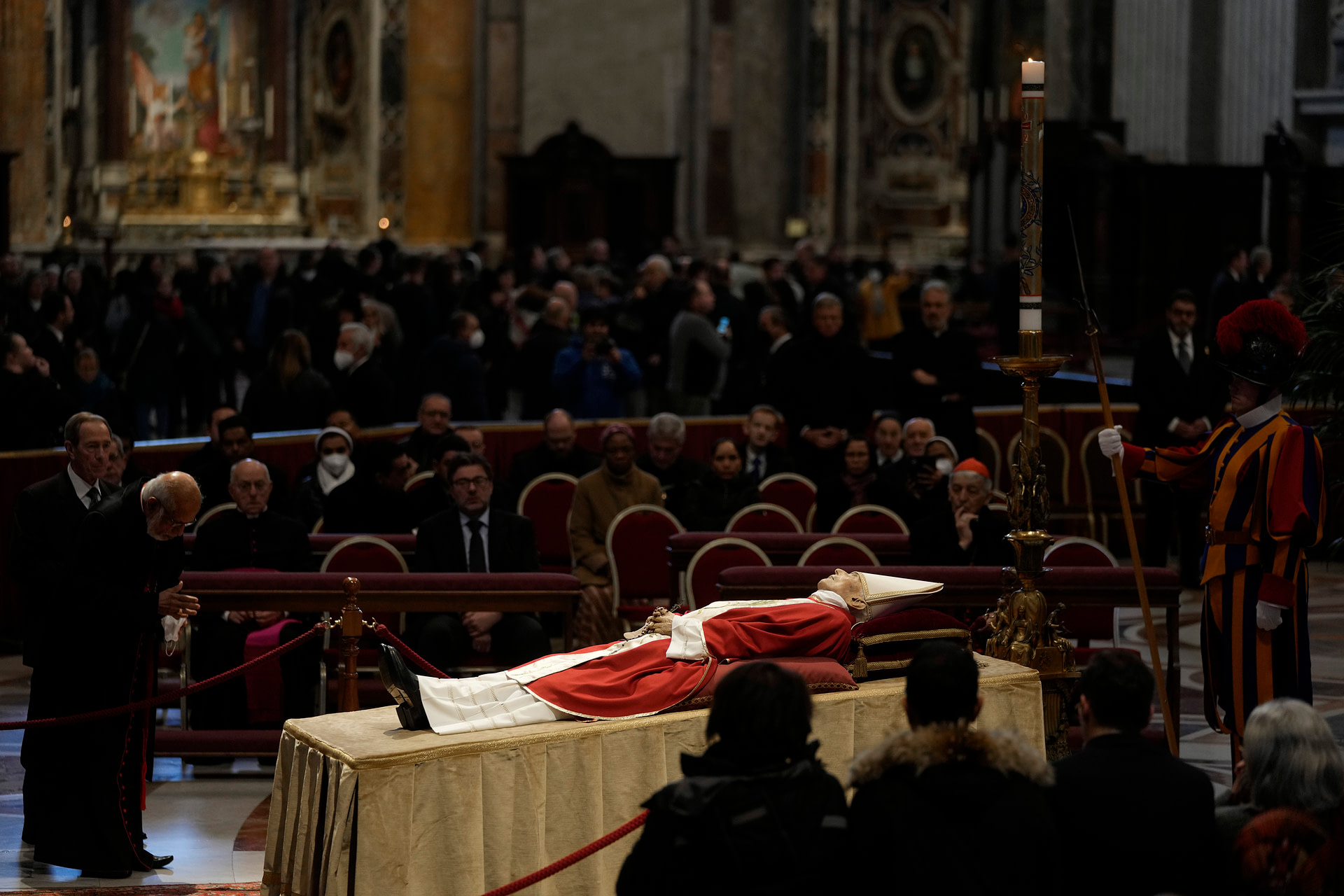 Francis is due to preside over the late German pope’s funeral on Thursday, an event that is drawing heads of state and royalty despite Benedict’s requests for simplicity and Vatican efforts to keep the first Vatican funeral for an emeritus pope in modern times low-key.

Francis drew applause when he opened his remarks by noting all those who were outside paying tribute to Benedict, whom he called a “great master of catechesis.”

“His acute and gentle thought was not self-referential, but ecclesial, because he always wanted to accompany us in the encounter with Jesus,” Francis said.

Later Wednesday, Vatican officials were to place Benedict’s body in a cypress coffin — the first of three coffins —along with a brief, written summary of his historic papacy, the coins minted during his pontificate and his pallium stoles.

After the funeral, the retired pontiff’s remains will be carried back into the basilica, where the coffin will placed inside a zinc one, and then finally into another made from oak.

In keeping with Benedict’s wishes, his remains will be placed in the crypt once occupied by the tomb of St. John Paul II in the grottos underneath the basilica.

Benedict, who was elected pope in 2005 following John Paul’s death, became the first pope in six centuries years to resign when he announced in 2013 he no longer had the strength to lead the Catholic Church. After Francis was elected pope, Benedict spent his nearly decade-long retirement in a converted monastery in the Vatican Gardens.

“We can’t forget the example that he gave in his resignation, that he more or less said, ‘Look, I’m not in this for the prestige, the power of the office, I’m in it for service, as Jesus taught,’” recalled Cardinal Timothy Dolan, whom Benedict named archbishop of New York in 2009 and cardinal in 2012. Dolan came to Rome for the funeral.

Thursday’s rite takes into account the unusual situation in which a reigning pope will preside over a funeral for a retired one, making important changes to a funeral ritual for popes that is highly codified.

Two key prayers, from the diocese of Rome and the Eastern rite churches, that were recited during John Paul’s funeral, for example, will be omitted because Benedict wasn’t pope when he died and because both branches of the Catholic Church still have a reigning pope as their leader: Francis.

While the funeral will be novel, it does has some precedent: In 1802, Pope Pius VII celebrated the funeral in St. Peter’s of his predecessor, Pius VI, who had died in exile in France in 1799 as a prisoner of Napoleon, the Vatican noted Wednesday.

PrevPreviousTwitter says it will relax ban on political advertising
Next‘Do you know how to put on a samurai suit?’: Inside the ambitious Bellator-Rizin crossover in JapanNext
Back to Feed