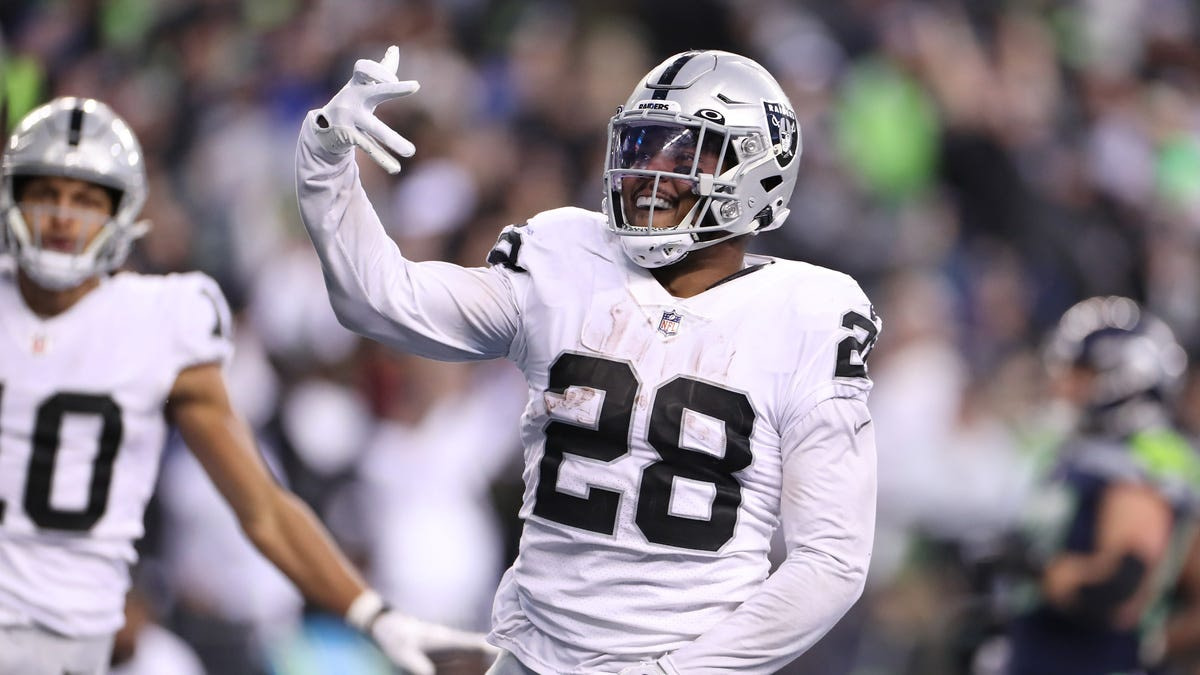 The Las Vegas Raiders snapped a three-game losing streak last week in an overtime victory over the Denver Broncos on the road. This week against the Seattle Seahawks on the road, they started a win streak in overtime.

Josh Jacobs took his 33rd carry of the night 86 yards to not only give himself 229 yards on the ground for an NFL season-high in 2022, but more importantly, for the walk-off win over Seattle in a thrilling 40-34 victory.

Jacobs got a hole on the right side of his offensive line after the Seahawks were forced into a three-and-out and punted to the Las Vegas 14-yard line and made a couple defenders miss before seeing a wide-open Seattle turf and no one left to beat. He hit the jets and the Raiders celebrated before he even reached the end zone.

Josh Jacobs (28) of the Las Vegas Raiders runs with the ball in overtime against the Seattle Seahawks at Lumen Field on Nov. 27, 2022, in Seattle, Washington.
(Steph Chambers/Getty Images)

Jacobs is now the NFL’s leading rusher with 1,159 yards, surpassing Tennessee Titans running back Derrick Henry, who has 1,048 now after only rushing for 38 yards in a 20-16 loss to the Cincinnati Bengals on Sunday.

This game was as thrilling as they come, with tons of ups and downs, including in the fourth quarter when Geno Smith’s fumble resulted in a Raiders recovery, which resulted in a turnover on downs for Las Vegas, which then resulted in a touchdown to put the Seahawks up 34-27 after Travis Homer’s 18-yard reception. It’s that back-and-forth play that kept fans on the edge of their seats all game long.

But the Raiders weren’t going down without a fight, and Derek Carr had more than enough time to tie this game. He went 10 plays and 75 yards on the ensuing drive to find Foster Moreau for a 5-yard score, tying it up after Daniel Carlson knocked home the extra point.

Once overtime came around, Las Vegas won the coin toss but couldn’t push the ball down into the red zone. Instead, Carlson set up for a 56-yard field goal to at least allow the defense a chance to end the game. But he missed it wide right, giving Seattle great field position on their own 38-yard line.

The Raiders wouldn’t give them an inch to work with, though, as Seattle punted in three plays and set up the eventual Jacobs score.

Geno Smith of the Seattle Seahawks jogs across the field in the third quarter against the Las Vegas Raiders at Lumen Field on Nov. 27, 2022, in Seattle, Washington.
(Steph Chambers/Getty Images)

He wasn’t just productive in the ground game but also the receiving game with 74 yards to tie Davante Adams as the team’s leader on six catches. Adams had seven receptions on 11 targets from Carr, but he wasn’t one of the recipients for Carr’s three touchdown passes.

Instead, it was Ameer Abdullah getting an 18-yard catch for the team’s first touchdown of the game. Then, Mack Hollins found the end zone on a 36-yard strike from Carr to make it a 14-13 game.

As they have all season, the Seahawks performed well at home behind Smith, who had 328 yards and two touchdown passes. Tyler Lockett had his other touchdown pass for 35 yards.

On the ground, rookie running back Kenneth Walker III was stopped a bunch with just 26 yards on 14 touches. However, he had two rushing touchdowns for Seattle, who liked to use him in red-zone scenarios.

Josh Jacobs (28) of the Las Vegas Raiders celebrates after scoring a touchdown in overtime to beat the Seattle Seahawks at Lumen Field on Nov. 27, 2022, in Seattle, Washington.
(Steph Chambers/Getty Images)

With the loss, the San Francisco 49ers now have sole possession of first place in the NFC West after picking up their seventh win of the season on Sunday. Seattle falls into second at 6-5 but will take on the Los Angeles Rams next Sunday to try and get back into first.

The Raiders, now 4-7, don’t have playoffs in their sights right now but could play spoiler against the Los Angeles Chargers next Sunday.

Transportation Secretary Pete Buttigieg speaks during the annual winter meeting of the...
45 mins ago

Please enter your date of birth to view this video By clicking...
49 mins ago

WWE 2K23 is the follow-up to last year's successful relaunch of the...
49 mins ago

CD Projekt Red has rolled out a new patch for The Witcher...
54 mins ago