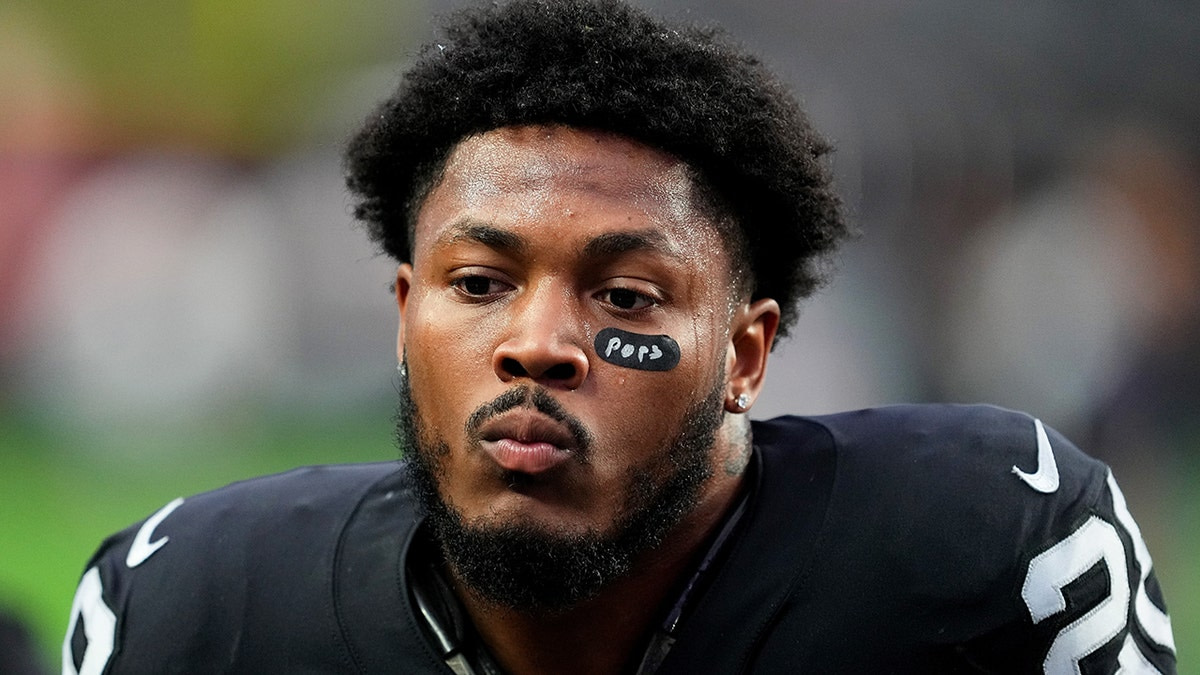 Las Vegas Raiders star Josh Jacobs was playing Saturday’s game against the Kansas City Chiefs with a heavy heart as his dad was rushed to the hospital during the week.

Jacobs had gone back home to Tulsa, Oklahoma, when his father Marty underwent emergency heart surgery. Jacobs’ 6-year-old son Braxton, was the one who found Marty and called 911, according to multiple reports. Marty woke up on Friday and the NFL running back returned to Las Vegas.

Josh Jacobs of the Raiders and Eric Bieniemy of the Kansas City Chiefs meet after their game at Allegiant Stadium on Jan. 7, 2023, in Las Vegas.
(Jeff Bottari/Getty Images)

“My son and my dad are like best friends, you see one you see the other,” the running back told reporters after the game. “Man, I’m just happy [my son is] really smart enough to understand what’s going on in that situation and… my pops said he’s his hero.”

Jacobs wrote the word “POPS” on his eye black for the game at Allegiant Stadium. He said he wasn’t going to come back to play but his father insisted. He said he was on about four hours of sleep.

“I wasn’t gonna come back – for me, family always before anything,” Jacobs said. “Especially the severity of what was going on, what’s currently going on. But my dad had woke up and he told me he wanted me to play, so that’s why I’m here.”

Jacobs said the love and support he received from his teammates and the Raiders organization made the decision to return much easier.

“That’s what made coming back good,” Jacobs said. “The whole team, even people upstairs that don’t really work with me every day. I definitely got that love and that support…. Everybody had my back and they knew it wasn’t really about football, so I appreciate them. That’s just the love that they got for me and I got the same type of love for them.”

Josh Jacobs wrote the word “POPS” on his eye black for the game at Allegiant Stadium on Jan. 7,, 2023, in Las Vegas.
(Chris Unger/Getty Images)

Jacobs had 45 yards on 17 carries as the Raiders lost to the Chiefs 31-13. He wrapped up his fourth seasons with the Raiders with 1,653 rushing yards and 12 rushing touchdowns.