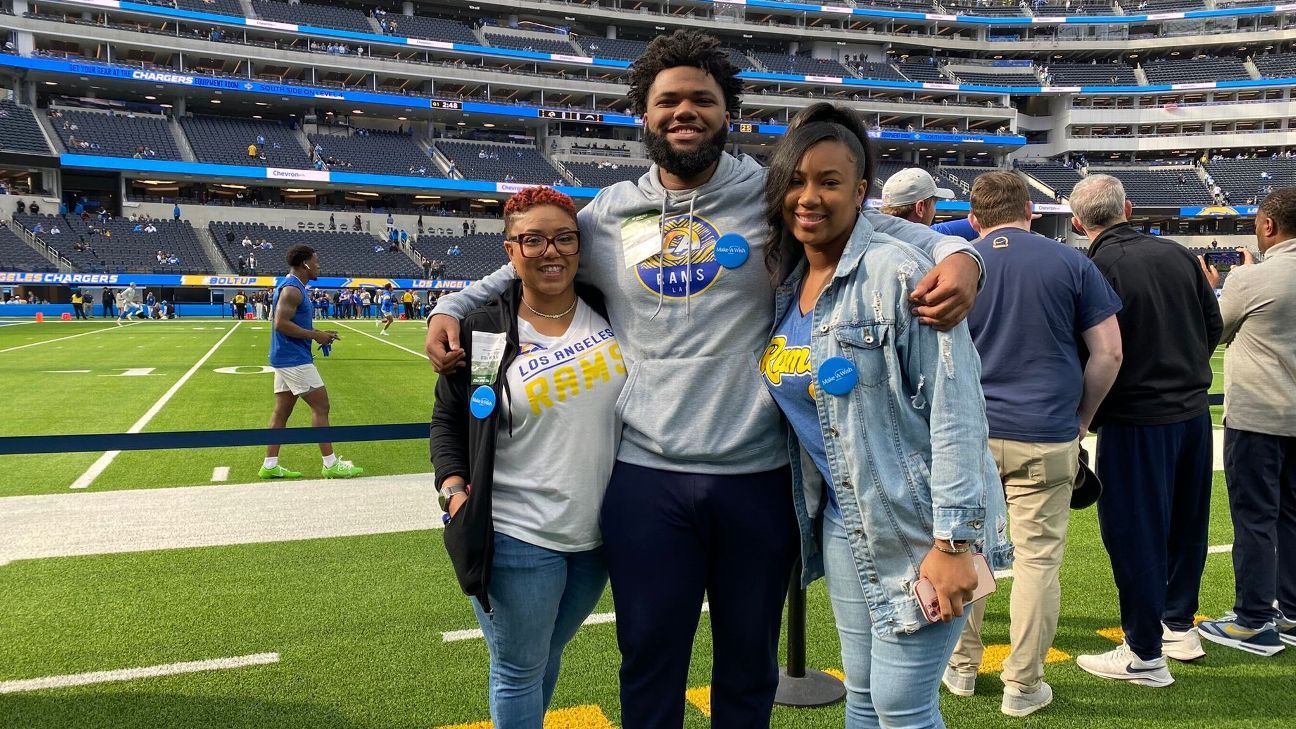 INGLEWOOD, Calif. — Kyle Frazier was working out with Justin Lovett, the Los Angeles Rams‘ director of strength and conditioning, when they were interrupted.

Frazier, who was at the Rams facility while having his wish granted through Make-A-Wish, was going through the workout when All-Pro defensive tackle Aaron Donald walked in.

The pair had met previously over Zoom, when Frazier’s wish could not be fulfilled in person due to the COVID-19 pandemic. In 2019, while Frazier was in high school, he was diagnosed with Hodgkin’s lymphoma. Four months after his diagnosis, he was declared cancer-free, and he wanted to meet Donald, his favorite football player.

Frazier, 21, said the call with Donald was “emotional” and really helped him through his journey.

“Oh my God, he was so nervous,” Frazier’s mom, Kenya James, told ESPN. “He said, ‘Ma, I didn’t even know what to say. I was so nervous talking to him.’ … It just kind of drove him. Just more motivation for him to continue to grow and learn and do in the sport and in class.”

And so, two years later, the Rams and Make-A-Wish partnered to bring Frazier to spend a weekend with the team, first getting a workout in at the team facility and then signing a one-day contract with general manager Les Snead. Frazier, who is a sophomore offensive lineman at Savannah State, stayed at the team hotel on Saturday night and took the bus to SoFi Stadium on Sunday to watch the Rams play the Los Angeles Chargers. And while the whole weekend has been great, Frazier said, he was “ecstatic” to get to work out with Donald.

“Just to be in the same presence as somebody I look up to was amazing,” Frazier said. “… And the workout caught me off guard. Now he put me through something, but every minute of it, I loved it. I cherished it. I’ll never forget it.” pic.twitter.com/vSvGQNiVMm

“Just to be in the same presence as somebody I look up to was amazing,” Frazier said. “I was lost for words. And the workout caught me off guard. Now he put me through something, but every minute of it, I loved it. I cherished it. I’ll never forget it.”

Lovett said as soon as Donald walked in to join the workout, “it was time to elevate what me and Kyle were doing.”

“AD’s super competitive as it is, and he doesn’t care if it’s me or you working out with him,” Lovett said. “He’s going to beat one of us. And it happened to be Kyle. So he showed him love, but also showed him that there’s a different level of how you push yourself to get where he’s at. So that was pretty neat and unique and exciting to see come in and jump in with him.”

As Frazier went through cancer treatment, he lost almost 60 pounds. But it was football that kept him going. Frazier had already committed to Savannah State and his coach assured him his spot would be waiting for him.

“[After hearing that] my tears dried up. I just asked my doctor a few questions, ‘Is my cancer curable?’ and ‘Would I be able to play football?’ And once I got the word that both of them was a yes, that was just my goal right then and there.”

On Sunday morning before the game, Frazier stood on the sideline at SoFi Stadium, watching the Rams warm up. He had goosebumps, he said, being that close.

A Russian national was indicted for helping an oligarch evade US sanctions...
47 mins ago

CNN  —  CNN Opinion contributors assess the high and lows of President...
57 mins ago