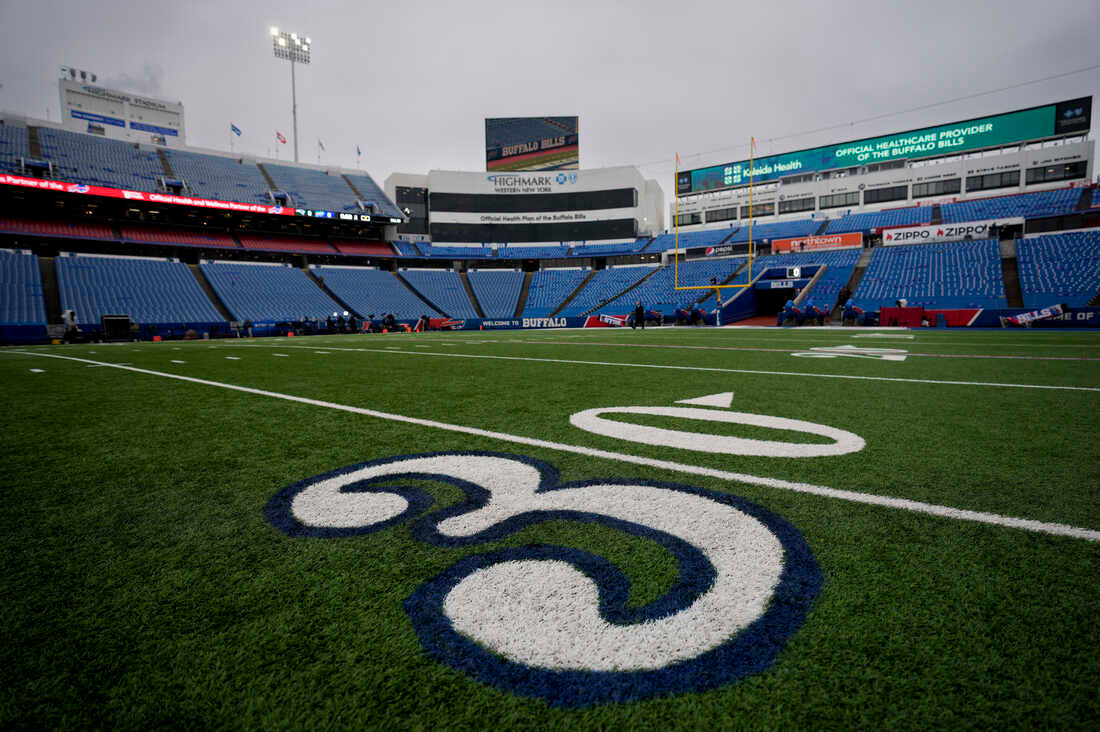 The 30-yard line at Highmark Stadium in Buffalo bears a stylized number 3 in support of Buffalo Bills safety Damar Hamlin, who remains hospitalized after suffering a cardiac arrest and collapsing during a game Monday night.

The NFL is entering its final, game-packed Sunday of the regular season less than a week after a shocking on-field injury jolted players and fans and prompted a flood of well wishes from across the country.

Hamlin, who suffered a cardiac arrest following a tackle, “is making continued progress” but is still in critical condition, the team said Saturday.

Players and coaches from all 32 NFL teams had vowed to wear “Love for Damar 3” t-shirts during pregame warmups over the weekend, commissioner Roger Goodell said in a statement on Saturday.

“Seeing the entire NFL family – teams, players, coaches, and fans like you – band together was yet another reminder that football is family: human, loving and resilient,” Goodell added.

The Buffalo Bills, who were scheduled to face the New England Patriots on Sunday afternoon in their first game since Hamlin’s collapse, posted a video tribute to Hamlin on social media and wrote in a separate post: “Today is for 3.”

It wasn’t just Hamlin’s own team that paid tribute to the injured safety.

The Jacksonville Jaguars and the Tennessee Titans took a knee as a group before their game Saturday. Players from several teams across the league wore Hamlin’s No. 3 jersey before their respective match-ups as a show of support. Even ESPN journalists turned their microphone flags upside down during broadcasts to make their ‘E’ logo look like a ‘3.’

Hamlin took to social media Saturday in his first public statement since his collapse to thank supporters for their words and gestures of encouragement.

“Putting love into the world comes back 3xs as much… thankful for everyone who has reached out and prayed,” he said. “This will make me stronger on the road to recovery, keep praying for me!”

Still, despite Hamlin’s recovery so far, the incident has served as a reminder to players of the physical risks involved in the sport.

“You put all this work in for months to try to go out there and play your best football,” Kansas City Chiefs quarterback Patrick Mahomes said ahead of his team’s game on Saturday. “But when you get on that field, I’m sure it’ll be a little bit of a weird feeling because it was such a scary incident. That was terrifying.”

Jaguars quarterback Trevor Lawrence said he and his teammates were blessed to be able to play professional football, but that Hamlin’s injury was a reminder that “this game is a dangerous sport.”

Howard Bryant, a sports commentator with Meadowlark Media, told NPR’s Weekend Edition Saturday that injuries such as Hamlin’s will always be a part of football as it’s currently played.

“What’s the line about football? It’s the one sport with a 100% guaranteed injury rate. The goal in football is to hurt people,” Bryant said. “So when you see something like this, there’s no way out.”

6:03 AM ETAssociated PressRory McIlroy overcame a final-round charge from Patrick Reed...
16 mins ago