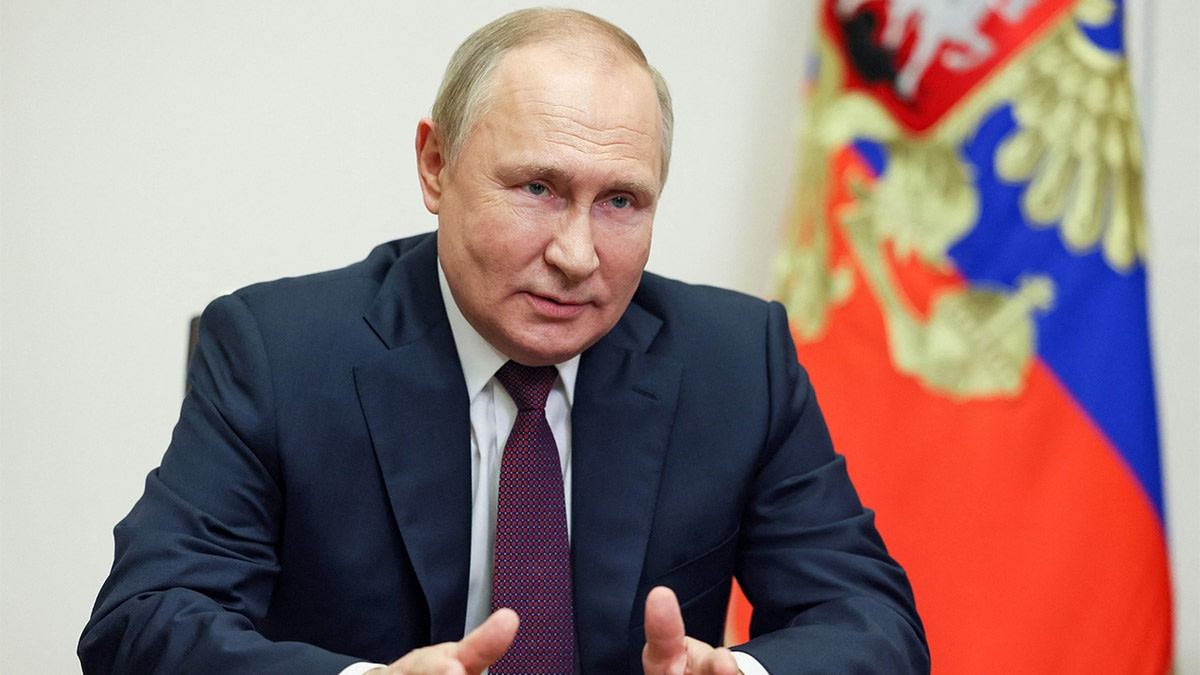 Spectators were seen at the Australian Open waving Russian flags, one of which with president Vladimir Putin’s face on it, and chanting in support of the country’s invasion of Ukraine.

The incident came after the quarterfinal match between Serbia’s Novak Djokovic and Russia’s Andrey Rublev on Wednesday, where the large contingent of fans were outside Rod Laver Arena. Djovokic had just won the match in straight sets.

“Just took a walk around Melbourne Park after filing and a group of people were standing on the Rod Laver Arena steps, holding up a flag with Vladimir Putin’s face and chanting in support of Russia,” The Guardian’s Tumaini Carayol, who is covering the tennis major tournament, tweeted.

Fans of Serbia’s Novak Djokovic celebrate his victory against Russia’s Andrey Rublev in their men’s singles quarter-final match on day ten of the Australian Open tennis tournament in Melbourne on January 25, 2023.
(MARTIN KEEP/AFP via Getty Images)

Tennis Australia released a statement saying police intervention was needed during the incident.

“Four people in the crowd leaving the stadium revealed inappropriate flags and symbols and threatened security guards,” the statement read, via BBC. “Victoria police intervened and are continuing to question them. The comfort and safety of everyone is our priority and we work closely with security and authorities.”

Russian and Belarusian flags have been banned by the tournament, though it was initially allowed if no disruption occurred.

That was reversed last week following a women’s match between Kateryna Baindl of Ukraine and Russia’s Kamilla Rakhimova, when a Russian fan displayed a flag during the match.

A man wearing a “Z” T-shirt watches the men’s singles quarter-final match between Serbia’s Novak Djokovic and Russia’s Andrey Ruble, next to supporters holding up Serbian flags, on day ten of the Australian Open tennis tournament in Melbourne on January 25, 2023.
(WILLIAM WEST/AFP via Getty Images)

The Australian Open has also been using a neutral flag throughout for all Russian and Belarusian players due to the current invasion.

During the match, a fan was also seen wearing a t-shirt with the letter “Z” on it, which is seen as a pro-war symbol.

Since the invasion of Ukraine began last February, Russian and Belarusian athletes have not been able to play under their own flags.

Wimbledon has also made it known that, as of now, no Russian or Belarusian tennis players are allowed to compete in the prestigious tournament in 2023.

Another incident like this may occur, as one Russian and two Belarusian players remain in the tournament.

On the men’s side, Karen Khachanov of Russia will face Greece’s Stefanos Tsitsipas in the semifinal on Thursday.

Russian President Vladimir Putin chairs a meeting of the Board of Trustees of the Talent and Success Educational Foundation via videoconference at the Sirius Educational Center for Gifted Children in Sochi, Russia, Wednesday, May 11, 2022.
(Mikhail Metzel, Sputnik, Kremlin Pool Photo via AP)

Victoria Azarenka and Aryna Sabalenka, both from Belarus, will be playing separate matches in the semifinal for women’s singles on Thursday as well.

Sony released its latest earnings report this week, and it showed that...
26 mins ago

Sony released its latest earnings report this week, and it showed that...
26 mins ago

A new Nintendo Direct will reportedly be held next week, as Giant...
28 mins ago

Given our general reliance on something called “food” you’d think the issue...
56 mins ago