The South Korean action movie Hunt is not a comedy. It’s a bloody spy movie with deadly stakes, full of bloody conflict and grotesque torture. The stellar action sequences make it clear that nobody in this political face-off is having fun — all the main players are powered by self-righteous conviction that only they can save their country and their government, and any atrocities they commit in pursuit of that goal are valid and justified.

But there’s still a sense of wry humor to the way it all goes down, as the back-and-forth conflict between factions gets so convoluted that even the agents showing up at the site of the latest conflict don’t always seem to know what side they’re on. Squid Game star Lee Jung-jae, making his directorial debut and starring as one of the two main leads, rarely tips his hand over into revealing that this entire political game is a bit of a farce. It’s a deadly game played by paranoid, violent people. But the movie’s strongest moments come when the action gets so ridiculous that the audience almost has to laugh, even as they’re wondering who’s going to die next.

Lee stars as Park Pyong-ho, the chief of the KCIA Foreign Unit, South Korea’s overseas intelligence agency. Chief Kim Jung-do (Jung Woo-sung) is his counterpart, the head of the KCIA’s Domestic Unit. In theory, they share the same goals and are working together to protect their president, a notoriously cruel dictator. (The film is set in a fictionalized version of the 1980s, drawing on a period of tremendous unrest and rebellion in the country.) When an assassin targets the president during a visit to Washington, D.C., Park and Kim are told there’s a North Korean mole somewhere in the KCIA, and they each launch a separate investigation to track down the traitor. 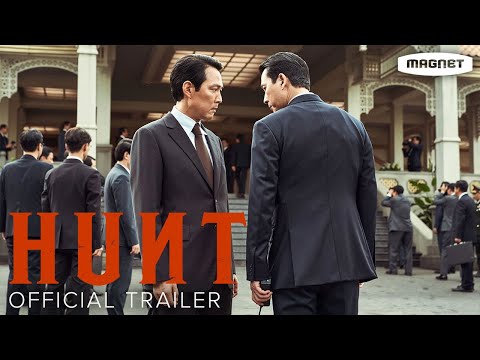 The plot gets so convoluted that it’s difficult to follow at times, particularly during the extremely fast-paced and action-oriented early going, when each new revelation, development, and shifting suspicion sends swarms of functionally identical black-suited KCIA agents into conflict. Suspects are nabbed and tortured, rescued and traded, guarded and murdered, as the agency turns on itself and its two leaders both attempt to manipulate the system and answer to a series of leaders with different goals.

At times, the crisis of the moment doesn’t seem any more specifically important than the McGuffin the characters are chasing in any particular sequence of a Star Wars movie. Each new development — a botched North Korean infiltration, multiple defectors, KCIA leadership changes, a key witness in a coma, a suspicious company laundering money — mostly serves as an excuse for Kim and Park to make new moves and refine their theories about who’s to blame. But as Hunt comes into focus as a cat-and-mouse game between those two men, who both accuse each other and then try to find proof, the stakes gradually narrow and become intensely personal. What starts out as an almost giddy celebration of Untouchables-style operatic violence turns into a bitter espionage drama about how far people are willing to go for their beliefs.

Seen solely as an action movie, Hunt is one of 2022’s most exciting and horrifying experiences. Lee uses that early assassination attempt as a calling card to establish his credentials as a choreographer of gunplay, assuring the audience that they’re in capable and ambitious hands. The entire movie is a tug of war between sympathies and suspicions, as both sides commit terrible acts in the name of truth. The film takes it as a given that there’s no justice to be found in a dictatorship, and that citizens are likely to be arrested, tortured, and possibly murdered on thin suspicions, or for sheer political expediency. It’s a bitter take on the spy story, one where wish-fulfillment heroism doesn’t have much place, and there are no swaggering James Bonds — just bloody-handed functionaries jockeying for survival. Lee plays the action for excitement, but keeps circling back to remind the audience of the human cost.

But by the end, Hunt has also turned into an impressive drama and character piece — one where the emotions are outsized, exaggerated, and expressed through explosions as much as through dialogue, but still a story more about people than regimes. Lee, playing a grimly controlled leader who’s miles away from his shaggy-haired Squid Game sad-sack Seong Gi-hun, keeps his cards close to his chest for much of the movie, but as his options narrow, his desperation and conviction leak out. Jung is a perfect match for him as Kim, a more volatile character who’s more willing to sacrifice his humanity for expediency, but still driven by belief.

Part of what makes Hunt work is that it doesn’t entirely choose between them. This isn’t a simple good-guy/bad-guy story: It’s about the limited choices in a fascist regime, for citizens and enforcers alike, and about the extremes it drives them to. Both men are rats in the same trap, looking for every possible path where they might chew their way out. It turns them against each other, but also makes them alike in more ways than they’d want to admit. The results are intense, engaging, and sometimes hard to watch, given that the real victims here are the people caught in the crossfire. But for fans of action cinema and espionage drama in particular, Hunt is a must-see. The tone and execution are highly different from Squid Game, but it’s just as much a murderous battle for supremacy where the outcome is never obvious.

Hunt is playing in limited theatrical release and is available for streaming rental on Amazon, Vudu, and other digital outlets.

A weekly roundup of the best things from Polygon

Sony released its latest earnings report this week, and it showed that...
19 mins ago

A new Nintendo Direct will reportedly be held next week, as Giant...
21 mins ago

Given our general reliance on something called “food” you’d think the issue...
49 mins ago

Kramatorsk, Ukraine CNN  —  A fresh barrage of missiles ripped through the...
55 mins ago