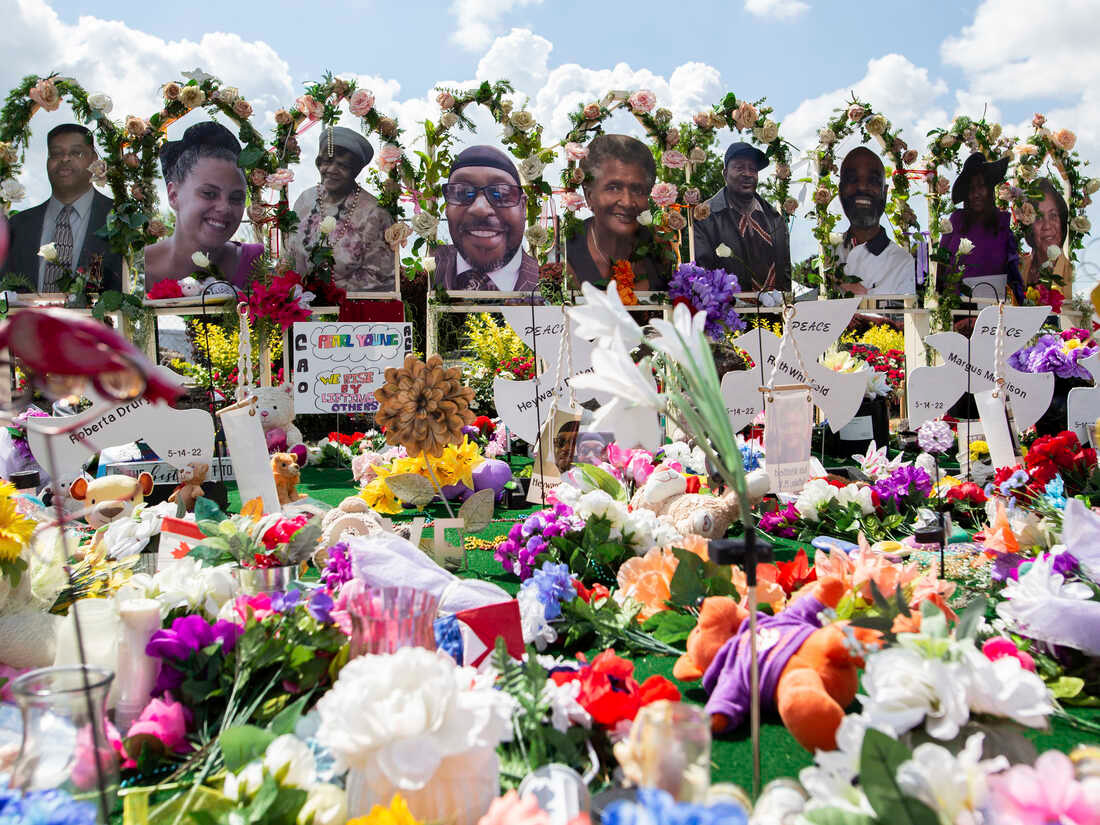 A memorial for the supermarket shooting victims is set up outside the Tops Friendly Market on Thursday, July 14, 2022, in Buffalo, N.Y. The accused gunman is expected to plead guilty to the state charges against him in his next court appearance on Nov. 28.

The 19-year-old white gunman accused of targeting and killing 10 Black people and injuring three others at a Buffalo, N.Y. grocery store last May is expected to plead guilty on Monday to state charges against him.

Gendron’s new date in court will be at 9:30 a.m. on Monday, according to court New York court officials.

“I am aware that Payton Gendron intends to plead guilty to the complete indictments, all 25 counts of guilty, and waive his right to appeal. The judge will have no option but to sentence to life without parole,” Buffalo attorney John Elmore, who represents the families of Kat Massey and Andre Mackniel, told NPR member station WBFO.

Buffalo attorney Terrance Connors, who also represents families of the victims, told WBFO that attorneys were made aware that a potential guilty plea to Gendron’s state charges was possible about three weeks ago. However, attorneys were advised to postpone sharing the information with the public until it was on the court docket, according to Connors.

“He’s going to plead guilty to the 25 counts in the indictment. And I assume that the sentence will be life imprisonment without parole,” Connors told WBFO.

Gendron’s state case is a separate one from the federal charges pursued against him.

At the federal level, Gendron is facing 27 counts — including 10 counts of hate crimes resulting in death and three counts of hate crimes involving an attempt to kill, along with 13 counts of using, carrying or discharging a firearm — following May’s shooting in the predominantly Black neighborhood in Buffalo.

If convicted on all 27 federal charges, Gendron could face either the death penalty or a maximum sentence of life in prison without parole. The attorney general will decide at a later date on whether to seek the death penalty, according to the Justice Department.

Payton Gendron (seen in orange) being is led out of the courtroom after a hearing at Erie County Court, in Buffalo, N.Y., on May 19, 2022. Gendron faces charges in the May 14, fatal shooting at a supermarket. Gendron is expected to plead guilty on Monday to state charges against him.

“The Justice Department fully recognizes the threat that white supremacist violence poses to the safety of the American people and American democracy,” Attorney General Merrick Garland said in a July news release.

“We will continue to be relentless in our efforts to combat hate crimes, to support the communities terrorized by them, and to hold accountable those who perpetrate them,” he added.

News of the gunman’s expected guilty plea comes after he chose not to pursue a psychiatric defense last month in his state case.

Gendron was scheduled to make an appearance in court last month, but according to The Buffalo News, the Erie County District Attorney’s Office announced that his case had been adjourned until Jan. 12, 2023 — citing a request by the defense to “review discovery material.”

The deadline for the attorneys representing Gendron to file a notice of pursuing a psychiatric defense was set for Oct. 6, according to a report by The Buffalo News.

In an emailed statement to NPR, a spokesperson for the New York State Unified Court System said the defense “neither filed a notice nor requested an extension to do so.”

The spokesperson, however, did not comment on whether the defense team would request a reopening of a psychiatric defense.

In July, Gendron was indicted by a federal grand jury on hate crimes and firearm charges, according to the U.S. Justice Department. He has been held without bail since his arrest after the May 14 shooting.

Growing up in Mexico City, Pamela Valdes says she was a bullied...
15 mins ago

Growing up in Mexico City, Pamela Valdes says she was a bullied...
15 mins ago

Please enter your date of birth to view this video By clicking...
18 mins ago

WWE 2K23 is the follow-up to last year's successful relaunch of the...
18 mins ago

CD Projekt Red has rolled out a new patch for The Witcher...
23 mins ago