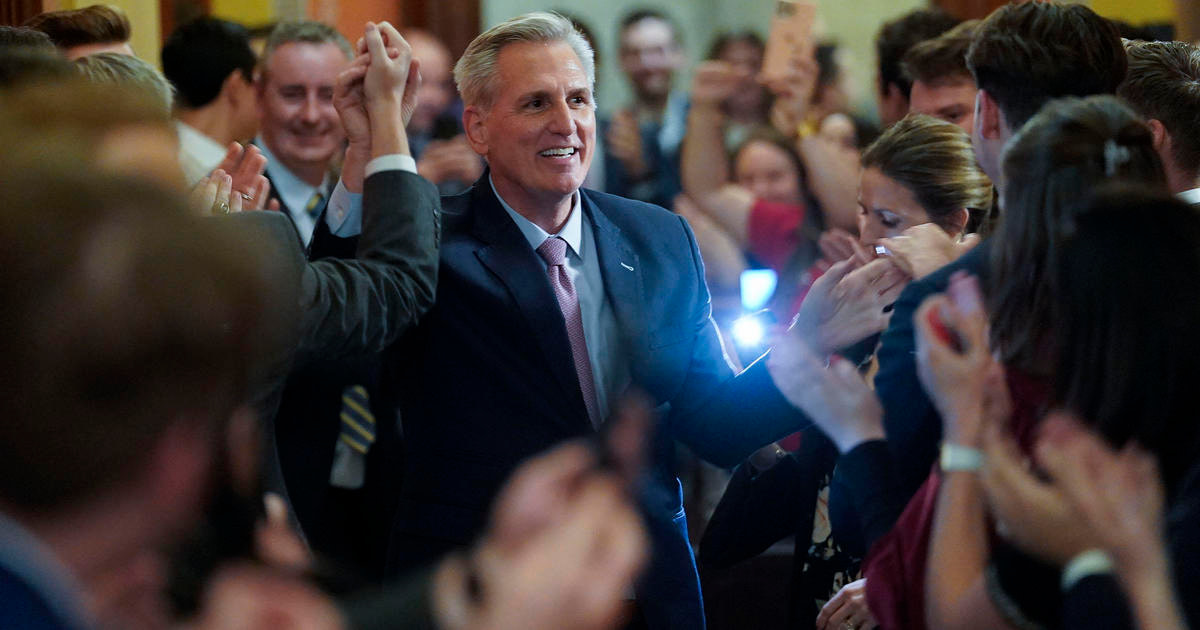 The concessions McCarthy made with conservatives to become speaker

Washington — Fresh off a bruising speaker’s election that spanned more than four days and ended on a historic 15th ballot, the House will convene Monday evening to consider a package of rules governing its operations for the 118th Congress and laying out the new Republican majority’s priorities.

The 55-page proposal is the culmination of weeks of negotiations between newly elected Speaker Kevin McCarthy and a bloc of conservative lawmakers who withheld their support for his bid for the gavel until they were able to extract a series of concessions from the Republican leader.

While McCarthy ultimately secured the support needed to claim the speaker’s post, the attempt to pass the rules package in the coming hours marks a crucial test for the California Republican and his leadership team as they navigate their slim, 222-member majority.

One Republican, Rep. Tony Gonzales of Texas, has already announced his opposition to the rules package. A second, Rep. Nancy Mace of South Carolina, revealed Sunday that she is “on the fence” about the proposal.

In an interview with “Face the Nation,” Mace said she supports the rules package, but took issue with the closed-door negotiations surrounding it that led the group of McCarthy’s detractors to ultimately support his election or vote “present.” The South Carolina Republican also indicated that GOP lawmakers who were not involved in the talks between McCarthy’s leadership team and the conservative holdouts have been left in the dark about what other promises he made.

“We don’t have any idea what promises were made or what gentleman’s handshakes were made. We just have no idea at this point,” she said. “And it does give me quite a bit of heartburn.”

The rules package at the heart of McCarthy’s quest to become speaker does include some of the concessions he made. Here is what is included in it, and some of the promises McCarthy made in handshake-agreements that aren’t in the package:

Perhaps the most significant concession McCarthy made in the rules package involves the motion to vacate the chair, a procedural tool used to remove the speaker.

The House rules under former Speaker Nancy Pelosi required a majority vote by a party caucus or conference in order for a motion to vacate to be brought up for a vote, and McCarthy initially lowered the threshold to force a vote down to five members.

But in his effort to appease his conservative detractors, McCarthy eventually agreed to restore the ability of a single member from either party to force a vote to oust the speaker.

Select subcommittee to investigate the “weaponization of the federal government”

The rules package calls for the House to take up a resolution establishing a “select subcommittee on the Weaponization of the Federal government.”

The panel would be part of the House Judiciary Committee, which is expected to be led by GOP Rep. Jim Jordan of Ohio.

Rep. Chip Roy, a Texas Republican who was a chief negotiator for the conservatives, told Fox News on Friday that McCarthy agreed to give the subcommittee “the kind of budget and the kind of staffing — we said as least as much — as the Jan. 6 committee.”

House Majority Leader Steve Scalise confirmed on Twitter that the House will take up the measure to establish the select subcommittee this week.

The Republicans’ rules package calls for the “Holman Rule” to be put back in place. First adopted in 1876, the measure allows amendments to appropriations bills to slash the salaries of or fire specific federal employees, or cut specific programs.

This provision requires bill text to be released at least 72 hours before a vote on the House floor, giving lawmakers time to read the legislation.

Enforcement of the rule would come after many Republicans decried the circumstances surrounding the $1.7 trillion government spending package, which was voted on by Congress shortly after the text of the mammoth legislation was released.

The proposed package of rules requires the House to hold votes on a number of bills to advance the GOP’s agenda for the new Congress. Among the measures are those that:

Republicans want to scrap the current pay-as-you-go requirement and instead institute a “cut-as-you-go” rule, which prohibits consideration of legislation that has the net effect of increasing mandatory spending within a five-year or 10-year budget window.

Vote on the debt limit

The proposed rules package gets rid of the so-called “Gephardt rule,” which allowed the House to avoid a separate vote on raising the debt limit.

While not included in the 55-page package to be voted on by the House on Monday, McCarthy agreed during talks with conservative holdouts to cap spending at fiscal year 2022 levels, which could lead to cuts in defense spending.

The potential impact on military spending is one of the reasons why Gonzales will oppose the rules proposal, he said.

“I’m going to visit Taiwan here in a couple of weeks,” he told “Face the Nation.” “How am I going to look at our allies in the eye and say, ‘I need you to increase your defense budget, but yet America is going to decrease ours?'”

Roy’s office said the congressman and his colleagues “secured a commitment from Speaker McCarthy to enact the biggest discretionary spending cut EVER in FY 2024,” but said the idea it means cutting defense spending is a “lie.”

“In fact, there was broad agreement spending cuts should focus on NON-DEFENSE discretionary spending. This means cutting funding for the woke & weaponized bureaucrats that received massive increases under the $1.7 trillion omnibus. (This IS NOT Social Security/Medicare),” his office said in a series of tweets.

But Jordan told “Fox News Sunday” that in light of the $32 trillion national debt, “everything has to be on the table,” including cuts to military spending. The Ohio Republican also suggested that the GOP-led House “better look at the money we send to Ukraine as well and say, ‘how can we best spend the money to protect America?'”

The White House condemned any potential cuts to defense spending and warned of the impact the move would have on the country.

“This push to defund our military in the name of politics is senseless and out of line with our national security needs,” White House spokesperson Andrew Bates said in a statement. “There is bipartisan opposition to defense cuts because making us less capable of keeping the American people safe and advancing our national security interests would be a profound mistake that our nation cannot afford.”

McCarthy pledged to give more of the Republican seats on the powerful House Rules Committee to members of the House Freedom Caucus, though it’s unclear how many of the nine GOP seats would go to the conservatives.

Ellis Kim contributed to this report.