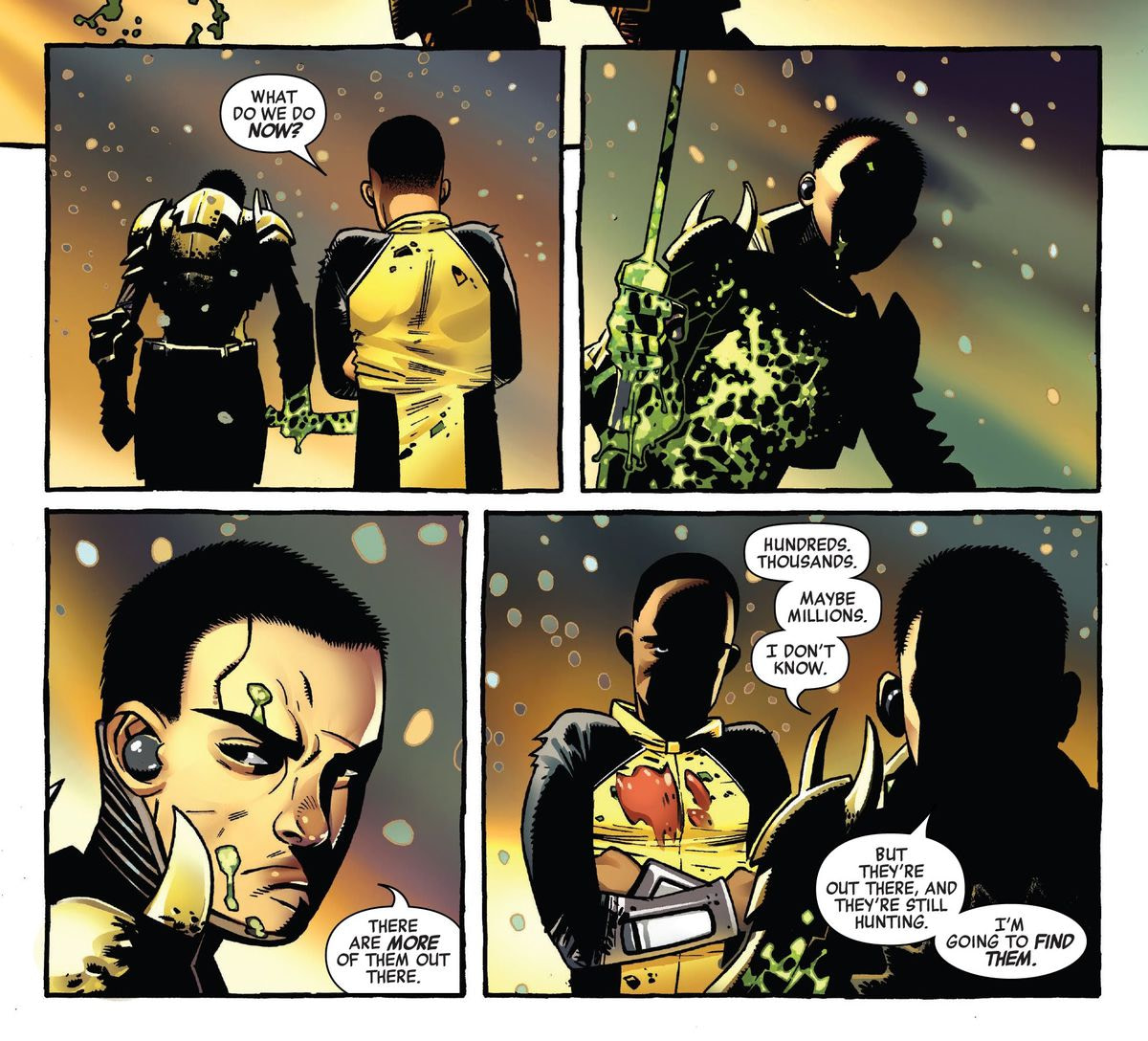 The repeatability of the Predator franchise is its true strength. Who needs an overarching canon when all a movie needs is some fun characters, good action, and the answer to a question like “How would a Roman legion react to a Predator attack?” From such humble questions come instant cult classics like Prey, which pitted an aspiring Comanche warrior against the alien hunter.

But this year, writer Ed Brisson and artist Kev Walker have shown that there’s no wrong time period for a Predator story, not even the future.

Brisson and Walker’s Predator comic has come to a close with its sixth issue, which is annoying, because I would have followed their protagonist forever: Theta, lone child survivor of a Predator attack, who cuts a bloody path across an alien-filled galaxy in her obsolete, sentient science vessel, racking up Predator kills and injuries on a quest to find and execute the one that killed her family.

What else is happening in the pages of our favorite comics? We’ll tell you. Welcome to Monday Funnies, Polygon’s weekly list of the books that our comics editor enjoyed this past week. It’s part society pages of superhero lives, part reading recommendations, part “look at this cool art.” There may be some spoilers. There may not be enough context. But there will be great comics. (And if you missed the last edition, read this.)

Normally the last thing I want a Hollywood executive to do is remember that they own a company that publishes comic books, much less print media, lest they start trying to mess with it. But I’m making an exception for Predator (2022), the comic.

I really do hope somebody at the Walt Disney corporation knows that Marvel Comics creatives just handed them a rock solid Predator spinoff for pennies on the dollar: What if Prey took place in a Star Wars-style universe?

Speaking of concepts that deserve continuation: “Arkham Academy” is currently an ongoing short in the DC anthology Batman: Urban Legends, and jeeze louise I wish this was an ongoing already. A group of incarcerated children and sidekicks of supervillains is sent to Arkham Asylum for a new super-juvenile detention program, only to realize it’s a front. They’ve actually been trapped by the Court of Owls — Gotham’s Eyes Wide Shut-style illuminati — in an attempt to create the next generation of supervillains and ensure that the chaos in the city never stops.

The best #1 I read this week was Black Cloak from writer Kelly Thompson and artist Meredith McClaren. I’ve always got room for another hard-boiled crime story set in a fantasy world, especially one as snappy and well executed as this. (P.S.: The Lagoon is full of mermaids with gulper eel mouths.)

I have to admit that Dark Reign is not grabbing me, except for one thing. And that’s the way that artists and writers are choosing to play with the really weird — and yet, storied Marvel Comics — concept of a New York City where all inanimate objects have been brought to cartoonish demonic life, like an evil version of the castle in Beauty and the Beast.

Like here, where Kamala Khan’s Jersey City mosque just grew some limbs and ran away because it was tired of listening to congregation infighting. This is very weird and very good.

On the other side of the spectrum, there’s J. Jonah Jameson’s bed, which will absolutely be appearing in my nightmares this weekend.