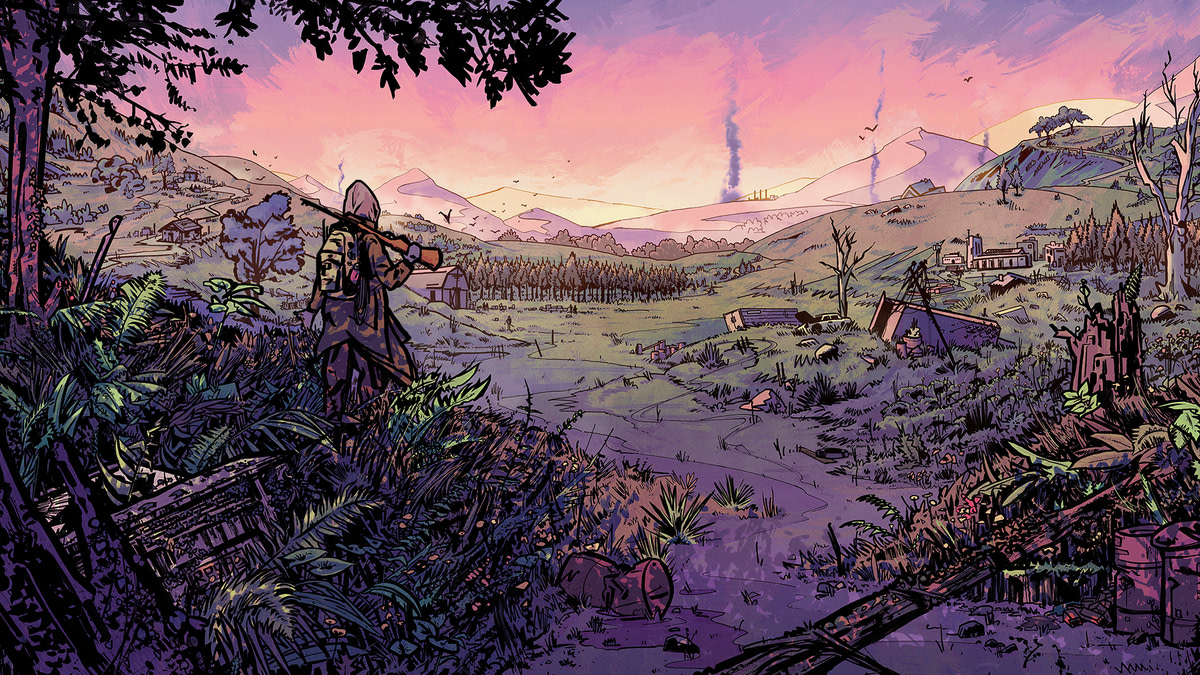 This Gritty Steam Shooter Is Your Next PC Gaming Addiction

The barkeep back at base has asked me to prove myself. I have to go out and kill five wolves and five humans to show I have what it takes to accept harder quests. I load up on water, food, and medical supplies. I’ve a rifle outfitted with a scope that serves as offense, defense, and reconnaissance. I talk to the train conductor outside about heading out into the forest. There’s no telling what waits out there.

Out on the field, I can hear gun fire off in the distance. But as I get closer, a howl cuts through the trees. Wolves. I take aim, peering further ahead of me and spot a pack. Six of them. I take them down and move in, failing to realize just how close that gunfire really was. At least three humans spot me, two yell for cover while one reloads. I dip behind a rock to check my ammo, then lean out. But I take too long to aim, and the other humans light me up with bullets. I die. I load back in at home base, ready to analyze what gear I could take this time to survive such a situation, but I know that no two hunts are ever the same. I set out again, hopefully having learned from the mistakes of my previous life. This is Zero Sievert, the debut title from CABO games and an excellent PvE extraction shooter that I am loving my time with.

Zero Sievert is a top-down extraction shooter set in a post-apocalyptic wasteland. Featuring delightfully violent pixel graphics and procedurally generated environments, the game was released via Early Access on Steam last November. As an Early Access title, additional environments and features are expected to arrive in future updates, but the core extraction experience is already captivating.. Gameplay is often slow and methodical, sometimes interrupted by sudden bursts of intense shootouts with AI. The goal is to manage the challenges of maintaining satiety and hydration, and a bit of inventory Tetris, all while attempting to survive, accomplish tasks, and escape irradiated, dangerous areas.

Zero Sievert contains everything a girl could ask for in an extraction shooter, this time without the added stress of PvP, as it’s a strictly offline, PvE experience. But what even is an extraction shooter? If you’re familiar with games like Escape From Tarkov, The Cycle: Frontier, or Call of Duty’s newer DMZ mode (you know, the one I can’t shut up about), then you’ll likely have a good understanding, but let’s strip it down to basics so we can get a sense of how Zero Sievert stacks up here.

Read More: Call Of Duty’s Year-Defining New Mode Is Everything Shooters Should Aspire To Be

Everything in an extraction shooter builds off a single game loop that asks you to go into a dangerous area and get out. Zero Sievert is no exception. If you’re getting in and getting out without dying, congrats! You’re winning. Everything you do in between entry and exit is largely up to you and the shooter experience you want to have.

You might choose to spend your time in between entry and exit engaging in combat, or looting gear and equipment that helps you persist out in the field. You may also be questing, running any number of errands, all with the loop’s demand that you get out alive. As I said about Call of Duty’s DMZ, which has become my go-to shooter, (yup, it dethroned Halo for me. What even is reality anymore??) extraction shooters like Zero Sievert offer up multiple gaming experiences at once. You might approach it like a shooter first, choosing to get into dangerous situations to test your reflexes. You might choose to play it more like a stealth game. You might treat it like a looter shooter, prioritizing your actions to get cooler and better gear. Because so many different things can happen in Zero Sievert, that primary loop of getting in and getting out can fade into the background, allowing exploration, looting, and shooting to chart an emergent path of unpredictable gameplay where no two games will ever feel exactly the same.

In Zero Sievert, your time in between entry and exit, what the game calls a “hunt,” is your own. But every trip you take out to one of the game’s multiple maps will benefit from preparatory work. On the Tarkov to DMZ spectrum (Tarkov being more gritty and realistic, DMZ being a bit more pick-up-and-play), Zero Sievert rests closer to Tarkov: You must keep track of your character’s hunger and hydration, as well as energy and radiated levels. You must also ensure you have the right ammo types for your guns. Yes, you can easily end up out there without a single bullet to shoot. You’ll need to bandage bleeding wounds, which takes time. The game is often simulating the very needs of the human body in a survival situation.

For some, this level of micromanaging might be too much, especially with challenging shooter difficulty riding on top of it. But Zero Sievert eases a bit of the difficulty of this genre in one important way: You don’t lose the gear you came in with when you die. What you lose instead is progress on quests, and anything you found while out on a hunt.

Zero Sievert is all about preserving momentum, but over a longer period of time than a single match. You should aim to extract with better stuff than you came in with, but sometimes things will go downhill so fast, with random encounters with the wildlife, hostile AI humans, and treacherous environmental hazards, that preserving momentum is sometimes just about getting out alive. Getting out means you can go back in more informed and better equipped.

Since Zero Sievert doesn’t take away your weapons and items upon death, you have a nice cushiony foundation to go back to if you die. Both the survival and shooting elements of Zero Sievert are a genuine challenge, so being able to reset back at base with all your stuff means you can just focus on those elements during a hunt. There isn’t a kind of reverse loop of punishment that’s the case with something like Tarkov or even DMZ.

The survival elements are kind of a slow moving train of destruction, which means if you pay attention, you can get out of the way. If you don’t, well, you’re in for a bad time. For now, needs like hunger and hydration feel like they move at an acceptable pace. It’s not so slow as to be irrelevant; but on the flip side, it’s not so crushing that it feels like you’re playing just a survival game. That said, I often found myself wounded, without enough health to keep myself alive on the field. I also made a number of mistakes, choosing to head out too hastily, before I checked my inventory to be sure I could heal, eat, and drink. There’s also a day and night element you need to keep track of. Ignoring that, I sometimes entered a map in the middle of night without any sort of light to see better.

But this is where Zero Sievert excels at being a great extraction shooter experience: Your truest enemy is yourself. Yes, Zero Sievert has a variety of stats, weapons, and conditions that you must learn about. Outer heaven help you if don’t read the tutorial before playing (yes, you must, absolutely, definitely, seriously read that tutorial). Outside of learning its nuances and systems, Zero Sievert really is a game where you are your worst nightmare, built on the decisions you make in a hostile environment.

Like its fellow extraction shooters, Zero Sievert is a tough game. But it’s very learnable and you have the freedom to set your own pace in a way that games often defined strictly by difficulty don’t. Every hunt so far has felt unique and I’m looking forward to spending more time here in this pixely wasteland, searching for better gear and facing the challenges of an unpredictable environment that are really just a mirror for my own patience and planning.

PrevPreviousAvatar: The Way Of Water Is Now 10th Biggest Movie Of All Time After 3 Weeks
NextCrappy Mobile Games Accidentally Led To The Best Version Of Vampire SurvivorsNext
Back to Feed

Are you excited for any of the dozens of high-profile video game...
28 mins ago

8:10 AM ETESPN News Services Colorado State issued a public apology to...
52 mins ago