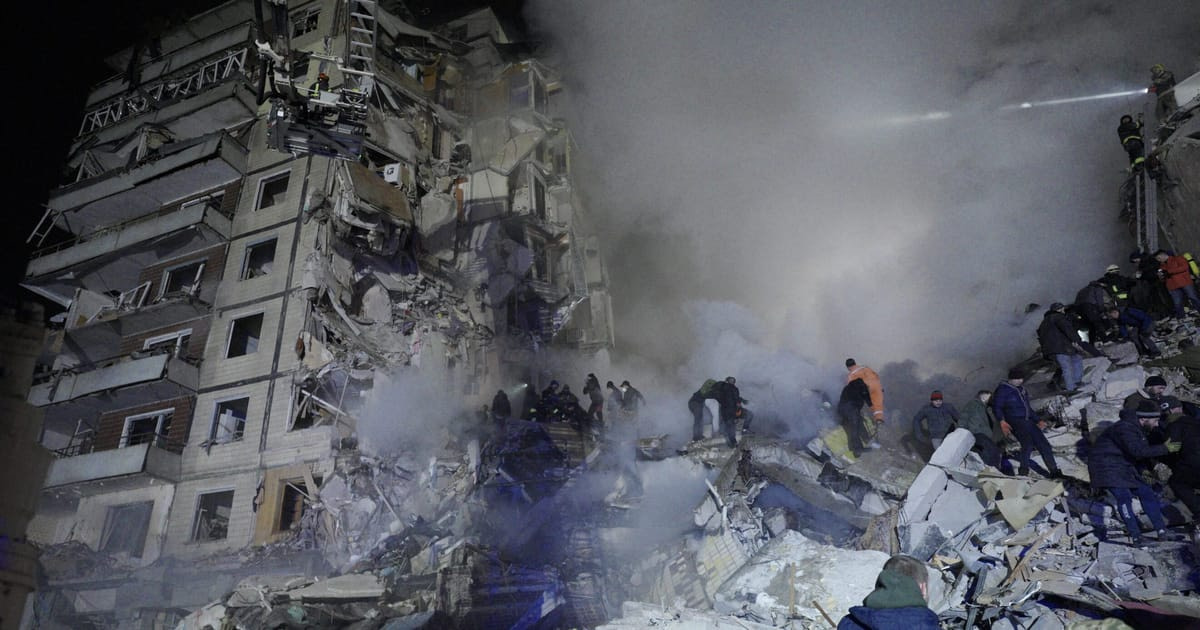 Russia launched another wave of missile attacks on Ukraine on Saturday, killing at least 18 people in an high-rise apartment block in the eastern city of Dnipro and damaging energy infrastructure in six regions, Ukrainian officials said.

A rescue operation continued in Dnipro on Sunday morning, where a missile strike devastated a nine-story residential building. Another 73 people were injured in the attack and 40 are in hospital, said Valentyn Reznichenko, governor of the Dnipropetrovsk region.

Other cities, including Kyiv, Kharkiv and Odesa, also were hit in Saturday’s Russian missile strikes, which once again targeted Ukraine’s energy facilities. Ukrainian Energy Minister German Galushchenko said on Saturday that emergency power outages had been instituted in most regions due to the shelling.

“The next few days are going to be difficult. Energy workers are already working on restoring electricity supply,” Galushchenko wrote on Facebook.

Saturday’s attacks, which came as Ukraine marked Orthodox New Year, were the largest assault in two weeks. Ukraine’s defense ministry said that Russia had carried out 57 missile strikes on Saturday, as well as 69 attacks from rocket launchers. Ukrainian forces destroyed 26 of the missiles, the ministry said.

The strikes came as the U.K. government confirmed it would send a squadron of 14 Challenger 2 tanks to Ukraine in what Downing Street called “the start of a gear change” in support for Kyiv. The U.K. will also send 30 AS90 self-propelled guns and will begin training Ukrainian troops on the operation of the new equipment within days, Downing Street said.

In his nightly address on Saturday, Ukrainian President Volodymyr Zelenskyy addressed the Dnipro attack, saying that debris clearance was ongoing. He said that to defeat Russia on the battlefield, Ukraine needed “those weapons that are in the warehouses of our partners that are troops are so waiting for.”

6:03 AM ETAssociated PressRory McIlroy overcame a final-round charge from Patrick Reed...
33 mins ago