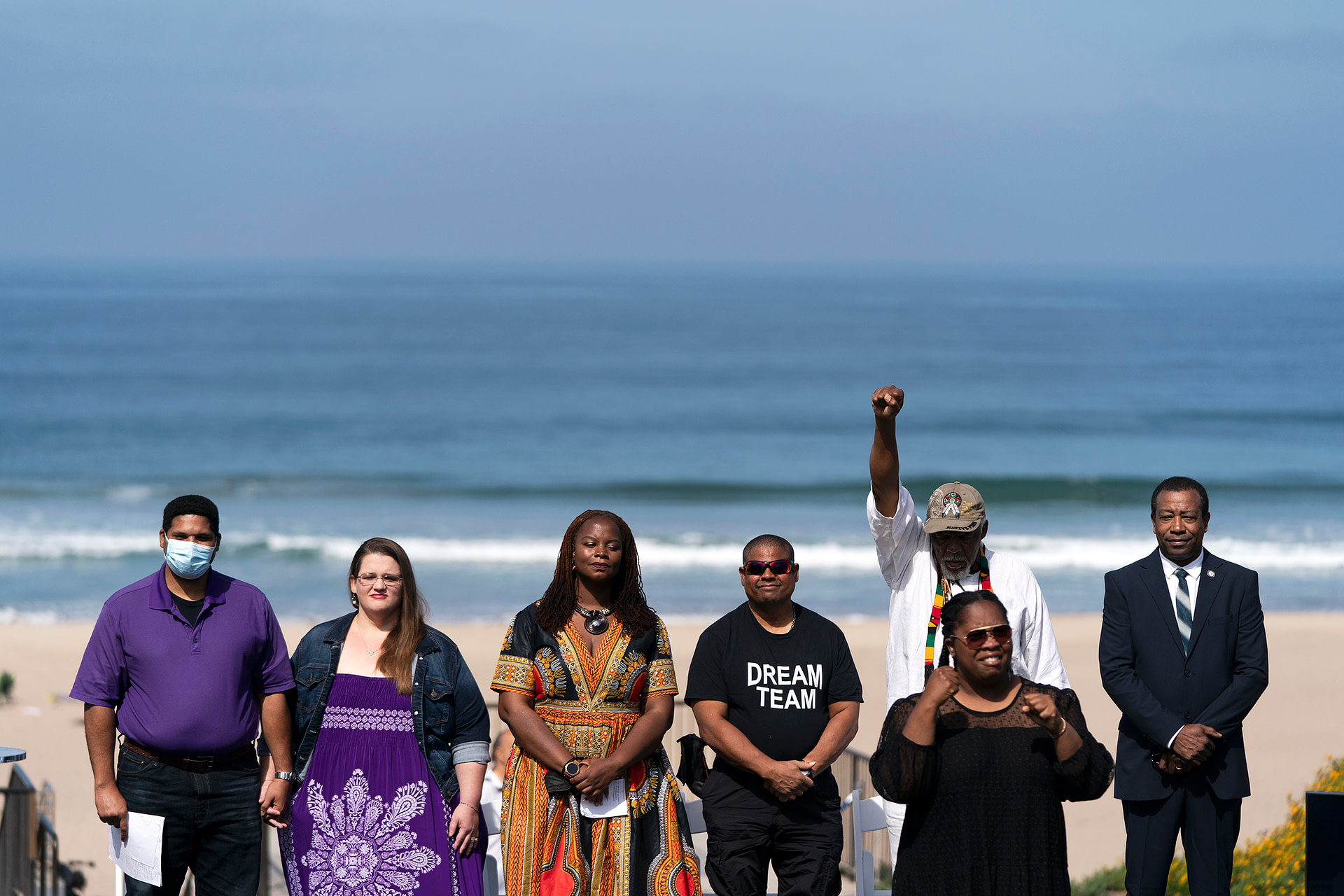 The descendants of Willa and Charles Bruce were finally able to claim their inheritance. In 1924, the city of Manhattan Beach, California, invoked the power of eminent domain to seize two beachfront lots from the couple — who had been using it to operate a popular Black resort — to purge the city of Black beachgoers. In 2022, Los Angeles County took the unprecedented move of handing ownership of the property back to the couple’s closest living heirs. Last week, the Bruces’ great-grandsons sold it back to the county for nearly $20 million.

After the sale was announced, some on social media criticized the Bruces’ decision to sell, particularly after a hard-won battle to have the property returned to the family. But they had every right to sell the land and should feel no obligation to hold onto the property merely for its symbolism.

Black dispossession and displacement remain a key source of profit-making through real estate, with many of the same legal tools used to take Black homes and land in the past still being used to do so today.

However, equally as shortsighted is treating this case as a model for reparations for all Black Americans, as some have suggested. Doing so would ignore that true reparation requires repair, and this solution doesn’t address the sources of racial inequality in America’s real estate system.

To understand why, we must first recognize how the Bruces’ lots became so valuable in the first place. In so many real estate markets formed in 20th century America, value was created and capital accumulated through racialized forms of dispossession, while Black exclusion from these same markets served to protect and enhance those values. Manhattan Beach’s pricey real estate market today is due in no small measure to the wealth and whiteness of the people who live there (the city’s median income is nearly three times greater than the national average, and Blacks constitute 0.5% of the city’s population).

For this reason, we should commend Los Angeles County for returning the land to its rightful owners but not assume that merely expanding Black real estate holdings can close a racial wealth gap that these very markets helped to create and perpetuate.

What happened to the Bruce family was particularly egregious but not atypical. Throughout the Jim Crow era, white public authorities, often in collaboration with private interests, used their powers to dispossess Black people of millions of acres of land and untold numbers of homes and businesses. Invariably, Blacks’ property was most endangered when it became valuable, or when it threatened the value of white property and business interests.

Blacks’ losses were real estate capitalism’s gains. It fueled the growth of real estate and housing markets across the country. One need not go far back into the land records to find the names of Black families who once owned and lived in what today are some of America’s most exclusive real estate markets.

Sometimes these lands were taken by violence and outright theft, but more often, it was done — as it was to the Bruces — through bloodless, ostensibly legal means or sold under duress for far less than it was worth. But no matter how it was done, the effects were the same. Properties that Black people struggled to acquire and pass on to future generations, businesses they worked to build and grow, the communities that formed in these spaces were taken, destroyed and redeveloped. They were changed into places Black people were excluded from or could not afford to live in and generated wealth that Black people would never possess.

Black dispossession and displacement remain a key source of profit-making through real estate, with many of the same legal tools used to take Black homes and land in the past still being used to do so today. Take the ongoing abuse of tax lien and tax foreclosure sales. Throughout the Jim Crow era, local white officials routinely overtaxed Black people’s property, steered untold numbers of Black property owners into tax delinquency, and then sold their land and homes for unpaid taxes. In cities across the U.S. today, properties in Black neighborhoods continue to be overtaxed, while Black Americans remain disproportionately victimized by a tax enforcement system that allows private investors to prey on financially distressed homeowners.

In the years following the 2008 housing market crash, for example, officials in Detroit grossly over-assessed the value of homes in the city’s lower-income, predominantly Black neighborhoods, in a desperate move to raise revenue and stave off bankruptcy. And, when financially distressed homeowners failed to pay exorbitant tax bills, they ordered their homes sold for taxes. Since 2009, 1 in 3 homes in Detroit were put up for auction at tax foreclosure sales, where private equity firms, real estate trusts, and other institutional investors scooped them up. In gentrifying housing markets, tax sales serve as a lucrative profit source, whose main victims are Black, elderly, and low-income. Local governments administer these sales and facilitate these forms of predation because it is in their interest to do so. Gentrification, after all, increases property values and grows tax bases, even as it drives up housing costs, prices out the poor, and grinds lower-income communities into dust.

In many respects, what happened to the Bruces in the 1920s was just a cruder, more nakedly racist version of what is happening to Black homeowners and neighborhoods across the U.S. today. The same motives and interests that led Manhattan Beach to seize the Bruces’ beachfront lots a century ago continue to shape and inform how local governments, private investors, and white homeowners see and treat Black people and Black property in housing and real estate markets: as a threat to be contained, and a profit source to exploit.

While the cash payout to the Bruce family was long overdue, proper reparations entail repair. In this case, what needs to be fixed is a system of real estate capitalism in America that consistently generates wealth and opportunity for white Americans at Black people’s expense. It’s one that makes property in white hands worth more because it is white and Black property worth less because it is Black, and that incentivizes public authorities to use their powers to shape real estate markets in ways that reproduce and reinforce those inequities. Righting the wrongs of the past and providing justice to Black Americans in the present must begin here.